Turn on suggestions
Auto-suggest helps you quickly narrow down your search results by suggesting possible matches as you type.
Showing results for
Show  only  | Search instead for
Did you mean:
Announcing Skype For Business Cloud Connector Edition version 2.0
By

Since the GA of Cloud Connector Edition, we've seen momentum from companies of varied sizes who use CCE to connect their telephony trunks to Microsoft Cloud PBX. Cushman and Wakefield, a global property management company uses Cloud Connector and Skype for Business Cloud PBX to empower their employees to be productive on any device saving $1 million a year on telephony costs.

Media bypass allows a client to send media directly to the Public Switched Telephone Network (PSTN) next hop - a gateway or Session Border Controller (SBC) - and eliminate the Cloud Connector Edition component from the media path.

Media bypass can improve voice quality by reducing latency, the possibility of packet loss, and the number of points of potential failure. Elimination of media processing for bypassed calls reduces the load on Cloud Connector, which enables a higher number of concurrent calls, and can improve scalability. Freeing Cloud Connector Edition from media processing tasks may also reduce the number of hardware an infrastructure requires. 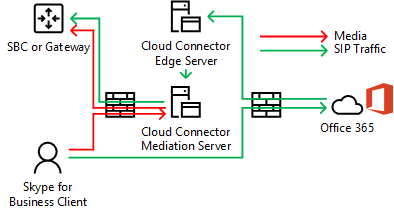 An inbound call from the PSTN uses the same signaling path in the reverse direction. For internal users, media will ultimately flow between the Skype for Business client and the Cloud Connector Mediation Server and then the SBC or gateway.

In the next topology - which employs media bypass - signaling takes the same path, but media flows directly between the Skype for Business client and the SBC or gateway, as shown in the following diagram: 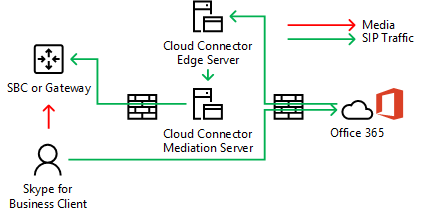 For more information, go to TechNet to learn more on planning and deploying Media Bypass.

Support of 16 Cloud Connector Editions per one PSTN Site

However, many large companies want to centralize Cloud Connectors in one location to minimize their costs. This is when the number of users can exceed 15,000 and require more instances per site. With the support of 16 CCEs, we can now support 45,000 to 75,000 simultaneous calls/lines.

Ability to manipulate SIP headers for billing or interoperability purposes

The following headers can now be manipulated in the INI file:

Previously, we required a dedicated Office 365 account with Global Administrator rights to perform certain administrative tasks. Based on customer feedback, we now let any account with a Skype for Business administrator role to perform management tasks. This allows larger organizations with several administrators to easily administer the system while keeping strict rules on access rights.

When a call is placed, every Server or Client reports its name in SIP User-Agent header for diagnostic purposes. For example, when you place a call using a Cloud Connector before version two, RTCC/6.0.0.0 MediationServer was reported which led to confusion when there was a need to distinguish Cloud Connector calls from calls placed via other trunks.

Improvements to self-monitoring and self-troubleshooting process

The last improvement we made by customer request are improvements to the self-monitoring and troubleshooting mechanism. With this update, additional scenarios were added now detecting the following events:

If one of the events outlined above is detected, the entire instance of the Cloud Connector is drained and marked as offline.

Disabling SSL 3.0 by default for all services used by Cloud Connector Edition

We reviewed all services in Cloud Connector Edition and disabled use of SSL 3.0 by default according to the security advisory published on October, 2014 https://technet.microsoft.com/library/security/3009008

Since the release of Skype for Business Cloud Connector Edition, we've seen momentum from companies adopting the solution to achieve Hybrid PSTN.  With CCE version 2.0, we have addressed some of the most requested improvements by our customers.  As we look ahead, we are committed to improving the functionality of Cloud Connector Edition, so please provide feedback to us via skypefeedback.com and Technical Community.

For more resources on Skype For Business Cloud Connector Edition, go to the following links: