Hello insiders, today we’re releasing build 83.0.478.5 to the Dev channel.  This is our Beta release candidate for major version 83, and since it’s also not that much newer than last week’s Dev channel build, it’s a relatively light week this week in terms of changes.  Regarding known issues, we’ve made some fixes for high, constant CPU use in random extensions or tabs, but since there could be many possible causes, we’re still very interested in knowing places where people are still seeing it, especially if it can be consistently reproduced.  We’ve also got a discussion going for anybody who’s been asking for the ability to keep your data in sync between Edge and Chrome:  https://techcommunity.microsoft.com/t5/discussions/ongoing-sync-between-microsoft-edge-and-chrome-di....  As for what’s new and worth mentioning:

We will most likely be releasing a small revision to this build later this week to make sure we’re perfectly in sync with all the changes from the Chromium project, and then next week, it’s on to version 84!  Also, make sure you don’t miss our update to bring Stable to version 81.

Turned out to be an extension. All good now!
0 Likes
Reply

@ShirleyNg Yes, I have five extensions installed.  I will try removing them to see if that helps.

So far that hasn't helped.  I've removed the extensions and opened and closed the browser twice.  I guess I'll try removing them manually and see if they start sticking around again.

Can we be able to tell when a flag is set to default, what it means exactly? it's not known whether it means "enabled" or "disabled". 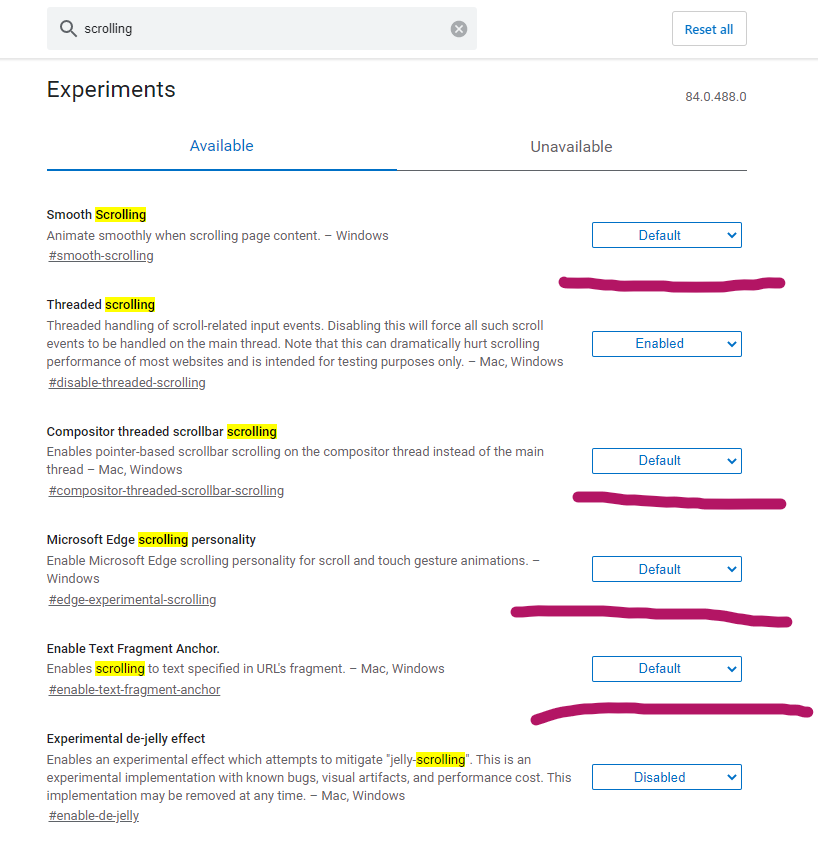 @Russ_Turrentine it's hard to use "don't need to log in" as a proxy for cookies not being cleared, since this site could also be logging you in because it works with single sign-on, because you have the setting in passwords enabled to automatically log you into websites that you've saved your password for, etc.  So, besides turning off that setting in passwords and deleting any saved passwords, it's also possible that some of the data you're not clearing (like site permissions) are actually stored as cookies, which is why you're still seeing some not getting cleared, and also why I was asking if there were any specific cookies you could pinpoint as not getting cleared, since it's a lot easier to try to reproduce something when you have a specific example.

@josh_bodner There are PDF improvements coming, which is great. But I haven't seen anywhere any discussion of a facing-pages (side-by-side) view. This is quite important for reading long docs on on a larger screen.

@josh_bodner I understand.  I deleted all cookies manually over the weekend.  There is no work account attached to windows. 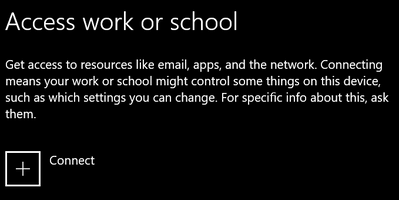 Passwords are not saved.

Yesterday I visited apple.com and dropbox.com, both of the Cookies are still there today.  I actually have 44 total after deleting them manually over the weekend.  This morning my Office 365 account for work did not force me to sign in like it did yesterday.

@Russ_Turrentine just one more thing, you're closing all browser windows right, including InPrivate ones, installed web apps/PWAs, etc.?  Having specific sites really helps.  Now that we have those, I'll see if I can have somebody on the engineering team look into it.

@josh_bodner High CPU is still a constant problem with Edge. One tab open, and four extensions, edge has 14 processes. CPU cooling fan runs all the time when Edge is open. And with more and more apps being replaced with PWAs, the situation is really untenable.

@josh_bodner Yes, I usually close all programs and either restart my desktop or shutdown my laptop at the end of every day or before bed.  The only thing I haven't tried so far is uninstall and reinstall the browser, but I'm getting the same result on every computer I have (2 desktops and 3 laptops).

Hi guys was there any development on this? Edge isn't clearing "browser data on closing" on my system (MACOS 10.13.6) either and is leaving me signed in across all sites when I shut down as well.

I only started noticing this behaviour about a week or so ago?

I also haven't changed any settings or installed any new apps on my side in months. 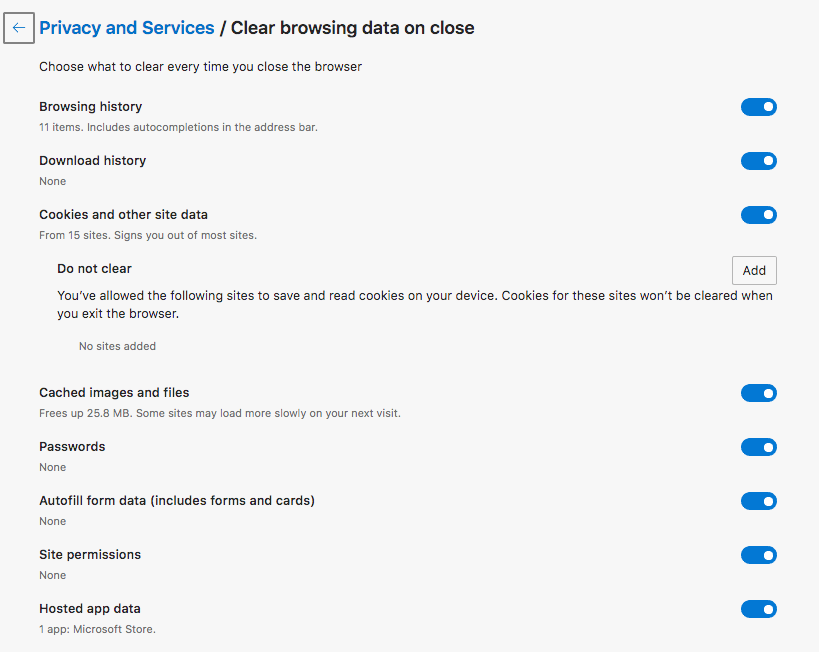 Canary seems to be the most reliable at consistently clearing for me and only after I uninstalled and reinstalled the browser.  I've uninstalled and reinstalled Dev on one machine and not another.  Neither seems to be very reliable at clearing.  The only items that typically don't clear for me are Cookies and Cached Images & Files.  I noticed one day this week that it sometimes appears that the browser crashes on close instead of closing.  I'm wondering if that prevents the clearing.  I just find it very strange that I noticed it quit working after the setting to maintain some cookies at close was added.  I've been trying to remember to manually clear the data when I notice it not clearing automatically.  I really wish it was reliable as before.

So I originally got around the problem by updating to the Dev 84 build (I believe it was 84.0.516.1) and that worked fine for a few days until... I started getting notices of a new build (84.0.522.5) and then after updating (why wouldn't I? Everything was working fine...) it's stopped clearing caches and logging me out again. Just as before with 83.

I really like this browser but this is now the second time over two versions that they've broken this functioning "feature" in updates.