The process of migrating mailbox content between Exchange servers has been greatly improved for Exchange 2007. Differently than previous versions, our tools are now part of the server code and are therefore more integrated and functional.

There are three tasks used for mailbox migration operations:

Move-mailbox functionality can be further divided in two main scenarios:

In this post I will go over Intra-Org migrations. I will address Cross-Org and the other tasks in future posts.

The following Exchange Server versions are supported for this kind of move:

Logon account for the user who is running Move-Mailbox needs to be a member of "Exchange Recipient Administrators" and "Exchange Servers" groups for both source and target Server. Permissions for previous Exchange Servers remain the same as they were for Exchange 2003 Migration Wizard.

Move-mailbox will perform a series of checks before actually trying to move the mailbox. This feature saves time by identifying errors right away rather than waiting until they happen during the move process.

Here is a list of current checks we perform:

Administrators can run the validation directly from the Move-Mailbox cmdlet by using the -ValidateOnly parameter. In addition, validation is always executed before a 'real' move. This means that even when running moves using the Exchange Management Console Move Mailbox Wizard, a pre-validation will be performed and any errors will be reported right away.

Here is a brief overview of the three logging types available:

All logs are enabled by default and are saved into this path: <Exchange Install Root>\Logging\MigrationLogs\. 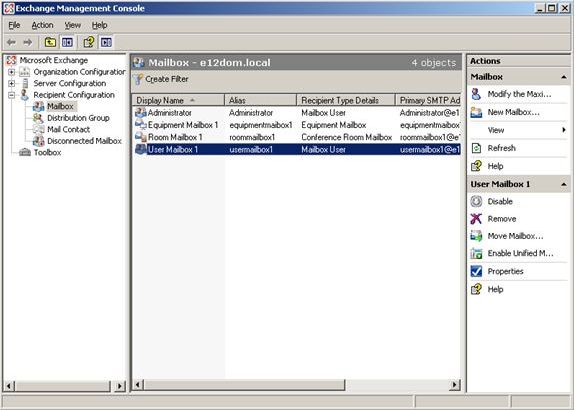 The Move Mailbox Wizard has been redesigned to match the new graphic design of Exchange 2007:

Some advanced options are available only when running Move-Mailbox from the Exchange Management Shell:

When running move-mailbox from the Exchange Management Shell you can interact with other tasks and create easy, but powerful, one-liners. Here are a few examples:

- Migrate all mailboxes from a legacy database to an Exchange 2007 database:

- Migrate all legacy mailboxes from a database to an Exchange 2007 database:

- Migrate all mailboxes for users whose alias start with the letter A from all databases within a legacy server to an Exchange 2007 database:

- Migrate mailboxes based on Organizational information

- Migrate mailboxes based on size