Turn on suggestions
Auto-suggest helps you quickly narrow down your search results by suggesting possible matches as you type.
Showing results for
Show  only  | Search instead for
Did you mean:
Introducing the Connect to the Internet Wizard (CTIW)
By

Introducing the Connect to the Internet Wizard (CTIW)


[Today's post comes to us courtesy of Shawn Sullivan]


Networking has changed significantly in requirements, setup, and configuration on SBS 2008. This blog post introduces one of the major networking wizards and gives some insight on how setup handles networking.


The job of the CTIW is to detect a third party firewall device or ISA server and an existing DHCP server, while trying to gather information about the current network settings so it can properly configure the server to communicate with the Internet. This is only a small part of what the CEICW did in SBS 2003. Public domain name, certificate, and Exchange configuration are done using other wizards.


To first understand how the CTIW works, you must first be aware of the networking requirements of SBS 2008 and understand what steps are occurring during setup to configure the network connection of the server. Whether or not you need to run the CTIW depends directly on a successful networking configuration performed by setup.


SBS 2008 has been designed primarily to move existing peer to peer networks to an integrated server solution. In the typical peer to peer network, a hardware device is acting as the DHCP server and firewall for the local area network (LAN). SBS 2008 setup has been designed to automatically detect the presence of DHCP and the default gateway on the LAN, and then use this information to configure the server’s network settings. The goal is to connect the server to the Internet with as little user intervention as possible. If the automatic configuration of the network fails during setup, then it will be clearly marked in the Getting Started tasks in the Administrator Console. If it is successful, then the CTIW does not need to be run.


SBS 2008 must be installed with a single network interface card connected to the LAN, which is protected by either a 3 rd party firewall or an ISA server. The Premium SKU includes a second copy of Windows Server 2008 Standard to install on another machine. If you wish, you can install a second NIC and ISA on this machine and place it on the edge of your network.


**The SBSAnswerFile.xml is used to enter either Migration Mode or Advanced Mode during setup. In either case, you are manually entering the network settings of the server and automatic detection is skipped. **


During a clean install of SBS 2008 (no answer file), the following steps are occurring to determine current network settings:


In the case of setup detecting multiple network interface cards (NICs), one of the following will occur:

How the router is discovered


If not discovered through DHCP, the server does the following both during setup and during the CTIW:


If a router is found, then the following is done:


When dealing with an ipv6 router with DHCP disabled, SBS relies on stateless auto-configuration to be enabled on the router. In this case, a router discovery broadcast will return a response from the router including the site prefix and gateway address of the network. IPv6 routers must support stateless auto-configuration to properly work in the SBS 2008 environment. IPv4 must still be enabled, as some SBS features, specifically Exchange, requires IPv4.


You can launch the CTIW from two places in the Windows SBS Console; either under the Getting Started Tasks, or under Network > Connectivity: 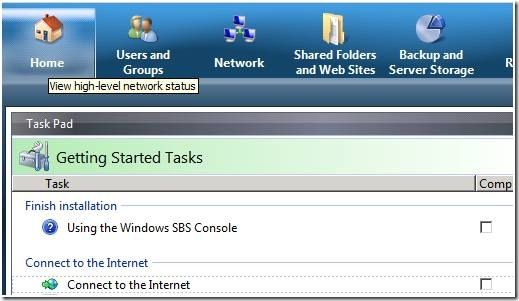 After the welcome screen, the number of network cards is detected and the wizard will attempt to automatically detect the router once more (if we have not detected a DHCP service). It does this in case the user has changed routers since setup or since the last time the wizard was run. The wizard will detect the presence of the router and an Internet connection in the same fashion that setup uses, described above. 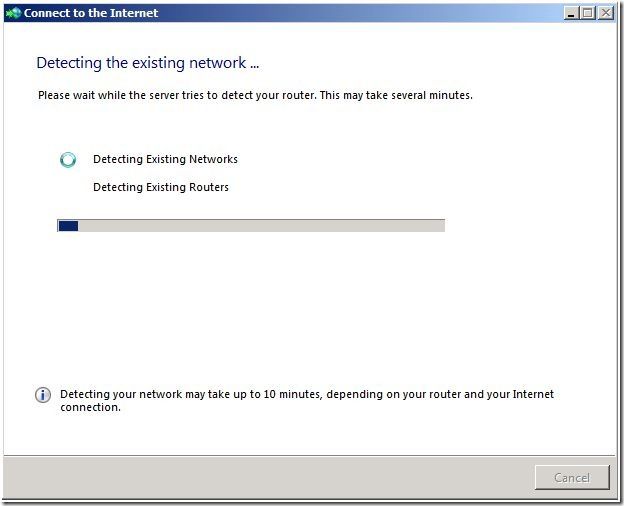 If the router is detected, if we receive a reply from the root hints server, and there is no existing DHCP server on the network, then the wizard will complete without incident.


If DHCP is detected on the network


If the wizard detects a DHCP presence, the following occurs:

If no router or Internet connection detected


If no router is found, then you are prompted to enter the IP address of both the router and server. At this point auto discovery is stopped. 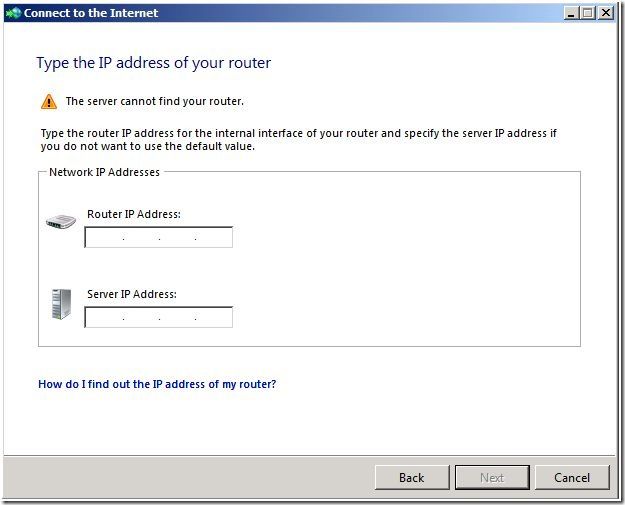 The wizard will assign a subnet mask of 255.255.255.0 to the server and configure DNS to use root hints. It will also test to see if the router responds to the IP address entered and attempt to resolve WWW.MICROSOFT.COM through root hints. 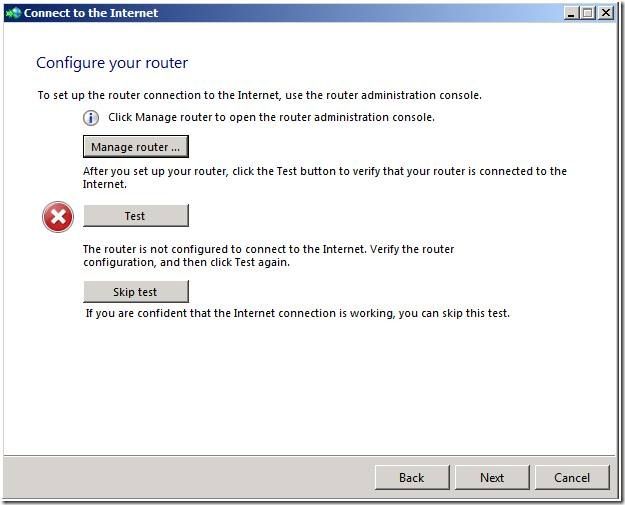 If the wizard fails to receive a reply from the router, it will notify us and allow us to continue without detecting a router. If the DNS query fails, we are prompted to login to the router to manually configure it for Internet access, and then test the connection.


We can skip the test only after attempting it at least once. This will allow us to complete the wizard without detecting the router or an Internet connection.