Turn on suggestions
Auto-suggest helps you quickly narrow down your search results by suggesting possible matches as you type.
Showing results for
Show  only  | Search instead for
Did you mean:
SBS 2008: Supported Networking Topology
By


Networking in SBS 2008 has been simplified down to one supported network topology. Today’s post will discuss this topology.


SBS 2008 is designed to be installed with a single network adapter. If SBS setup detects multiple NICs all but one will be disabled. The NIC must use a private IP address with a 255.255.255.0 subnet mask. The following IP ranges are supported:


SBS 2008 will not install with a public IP. If you must use a public IP you must change your IP after setup manually.


Below you will see an illustration of the supported network topology. As you see the SBS 2008 server has a single NIC. This NIC connects to the same switch(es) as the clients. This switch also connects to the firewall/router that gives your network Internet access.  In this illustration we also see a site to site VPN connection that is being established by the hardware routers, this can be used to connect a remote office to your SBS domain. 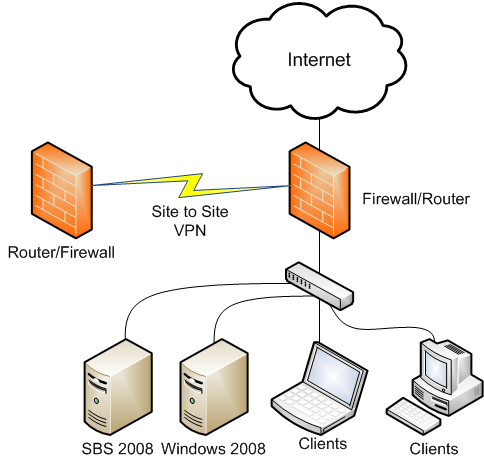