is there a Roadmap when the Explorer (and File Dialogs) gets re-designed unsing Fluent Design ?
~ daslicht

Revamped file explorer is a must have! i hope they do it in the 20H1 build. there is still enough time before spring 2020
1 Like
Reply

exactly, that's the main thing why I keep using macOS, but all we see are other things.

and this stuff is more important than a modernized Explorer?

How about finally be able to see folder sizes in ?!

something like this ?, I bet many people would find this more useful that the 4 features above: 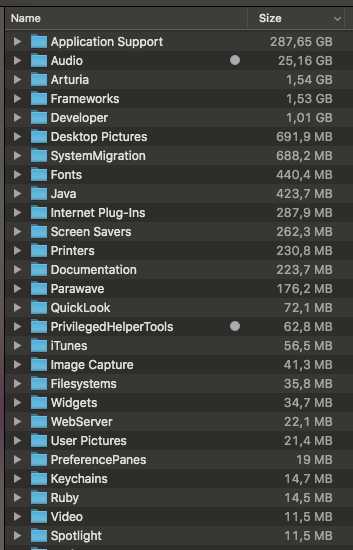 ah Windows is not even comparable to Mac. Apple products are overpriced junks IMO and they choose the easy way out. so for example you see Windows sometimes has rare problems with old hardware, right?
it's because Microsoft is making a Windows to be compatible with the hardware of the past 15 years. it's really not easy to do that. of course some times an old chinese made bluetooth speaker stops working with the latest version of Windows 10 (1903) and they blame Microsoft for that and then say: oh look, linux and mac don't have these problems. lol
the reality is mac and apple don't even support 3rd party hardware, they limit their OS to a specific set of hardware And software so they won't have to deal with people's problem in the first place. that's why people are forced to pay 999$ for a stupid apple screen stand...

now i know Microsoft is not putting File Explorer modernization as their first priority but there are few things to consider. first it's better not to add the option to show folder sizes in the file explorer. why? because in order to show the exact folder size, all of the contents of that folder must be calculated. it's the same as right clicking on a folder full of thousands of small and large files such as program folders or game folders and then you see how long it takes to calculate all of the file sizes and show the exact size of that folder.
in my opinion that's the reason why they haven't implemented it because it can slow down the whole system. plus after every change in the contents of that folder like even a small file deletion, the whole folder size calculation process should be triggered. it totally rekts the disk, be it SSD or normal HDD.

the current version of file explorer on Windows insider 18975 isn't bothering me so much, maybe it's because i don't have any suggestion in mind that what the alternative improved version would look like you know.. so it's enough for now and satisfies my needs. but i do love a revamped version, whatever Microsoft's vision will be about it.
i also like a Pie menu style on the right click context menu. currently it shows as a vertical menu but i like to see a revamped style where it opens in a Pie menu style with nice fluent design elements and everything. i even suggested it in Feedback hub, but guess it needs more votes to be considered.

last night i tried the Power toys for the first time. it's got only 2 "toys" currently and they are both useful for me. 1st one shows all the shortcuts by holding Win key for 1 second, and the other helps me manage multiple open windows on the screen by holding Shift key and dragging each window to a predefined location.

2 things i hope to see before 20H1 release is a revamped file explorer look (lower priority) and SETS feature (higher priority). now that Microsoft made their Edge browser based on chromium, they can update their WebView system and change it from EdgeHTML to chromium, then start working on implementing SETS, again.

at the end of this month there is a bug bash, i think they are getting ready to solidify these features for now and eliminate all the bugs and then start working on other new features.
0 Likes
Reply

@HotCakeX  I am talking about macOS not Apple Hardware

does macos use the same file system? nope. their proprietary file system is called apfs and it's different from NTFS. again the same argument from my previous comment applies here.

Windows is the most widely used OS for a reason. apple's limited hardware and os support gives them ability to use apfs file system which is made only for flash drives like fast SSDs.

Windows on the other hand should consider all types of customers. there are still people who use IDE hard disks with Windows.........
yeah IDE, not even SATA.
of course Microsoft can't implement a file system that kills the hardware compatibility for Millions of people, if not billions, who still use HDDs.

on macos calculating the folder sizes on fast SSDs is not a problem, that's why it's implemented there.

so it's not an excuse, it's the reality...it's the people

With all that said, Microsoft IS working on a newer file system and it's already in Windows server 2019 and i think it's in Server 2016 as well. called reFS.
it's supposed to be the successor to the NTFS eventually but NTFS is a well tested file system, reFS also needs to pass all those tests to be ready for global roll out.

you can read more about it here:
https://en.wikipedia.org/wiki/ReFS

https://www.xyplorer.com/ for windows can do the same as finder, it actually works quite good and fast.

Anyways this was just one example which thing are missing under Windows, but hey, it is just a matter of preference. So use what suits your need. No need to argue.

And still no sign for a updated Explorer. Even the white glitches in dark mode are still present.

Use modern UI （Fluent）to rebuild the most commonly used system components (such as file explorer).