Turn on suggestions
Auto-suggest helps you quickly narrow down your search results by suggesting possible matches as you type.
Showing results for
Show  only  | Search instead for
Did you mean:
How Do I Stop Upgrades to IE9?
By

How Do I Stop Upgrades to IE9?

Moving people off of older browsers onto newer ones is something we have been pushing hard for at Microsoft. The latest version of IE is significantly more secure than older ones, and way more interoperable. (Who really wants to develop 2 websites when they really only want one – one for some crusty old version of IE, and another for everything else?) However, historically, upgrading the browser had a very pronounced install experience – it felt like a really big deal, and was pretty scary. My mom, who by now has been trained not to install stuff as her default reaction, isn’t going to be aggressively looking for an install. She would get left behind on such an install.

So, to help reduce that friction, we’ve announced that we’re going to help keep people up to date automatically, to remove that install experience.Details are here: IE to Start Automatic Upgrades across Windows XP, Windows Vista, and Windows 7 .

What this will not stop, however, is web advertisements. And because we care about IE adoption, it turns out we advertise rather a lot. Users running older browsers, if they head over to microsoft.com/ie, will find this: 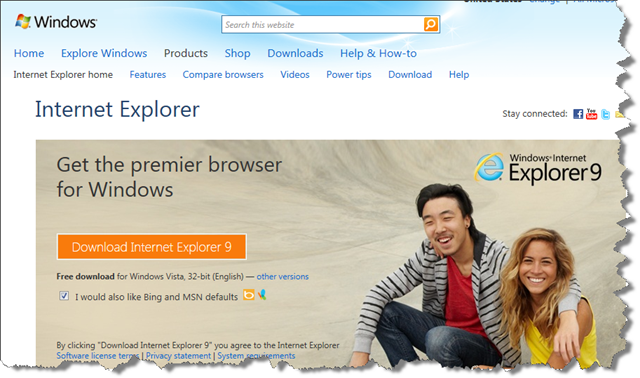 So, even though we stop users from automatically having an upgrade, we’re still putting the idea in their heads. And there is an advertising campaign which I’ve recently heard a couple of customer comments on: the web slice for the IE add-on center.

Here’s what it looks like if you are up-to-date: 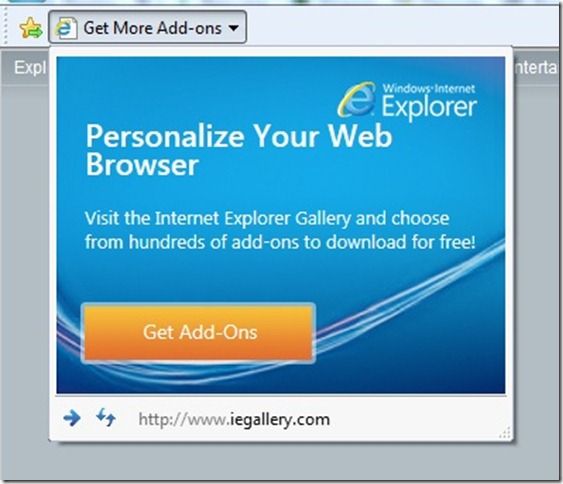 But, if you are running an older version of the browser, it will suggest upgrading to the new one: 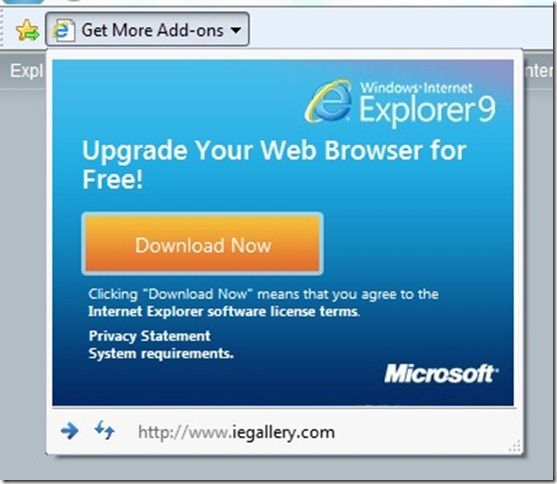 The feedback I’ve been hearing from the couple of customers who have reached out is that they want to block their users from seeing these advertisements and choosing to upgrade. How do they do that?

First, to point out where we see this – this is a default web slice, so the folks who notice it are those who run a lot of clean machines, so it’s far more visible to those in IT who look at clean builds than it is to end users who have had some time to customize.

It turns out that it’s super easy to block the impact of advertisements for IE9 and stop that upgrade:

Not only is it easy, it’s the only effective way to do it. Even the blocker toolkit won’t stop a determined administrator of the computer. It’s inherently self-contradictory to ask how to limit a set of users to whom you have granted unlimited power. I worked with one customer who was sure that everyone was running IE6 and that nothing else would work. But, since they had local admins, some investigation led us to discover that they had an entire continent running an updated version of the browser, and that despite this they were still in business on that continent!

Hey, if they’re admins anyway, you can be sure that there is all kinds of stuff on there that you haven’t explicitly approved of. (In my travels, I’ve come across one and only one software inventory which did not contain “World of Warcraft.” I’m just sayin’…) If they call helpdesk, just update the script to check the version of the browser, and ask them to downgrade if it’s not your standard and they want support. Otherwise, consider it free testing. What do you think happened to the customer’s perception of the risk of moving to the latest browser after they discovered that an entire continent already was? It went way, way down. If they are admins, they can do what they want, and no group policy is going to stop them. (Have you ever tried to block a policy from doing something? It takes under a minute – if you are an admin.) Pretending you are in control of local admins is not the same as actually being in control. If you need to actually be in control, see the first bullet above – making users non-admins.

Of course, some customers would prefer more options, and IE is, as usual, extremely friendly to the administrator. Another thing you could do:

Yep – if you make the favorites bar go away, then the web slices go away also. (It’s off by default in IE9 anyway, so perhaps it’s UI training?)

You could also block the URL, but that seems a tad drastic to me. You could also go after whacking the file - after all, it's just a shortcut called Web Slice Gallery sitting in the Favorites Bar subdirectory of the user's Favorites folder. A bit primitive, but it would get the job done.

In the end, it’s just an advertisement, but it’s a fairly visible one. The administrator will always be in control of that upgrade decision. If I can help you with web site readiness, I’m happy to do so in order for you to move forward as well!