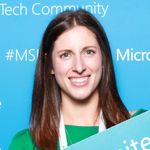 This week Devs had plenty of exciting updates announced at Build 2016, including new developer capabilities for Skype for Business. The Office 365 Network announced an Office 365 Connectors YamJam and continued to listen to Ignite feedback in our #MSIgnite TweetJam. Our member of the week is Luz Rodrigo!