Over the past few months, customers are increasing both the number of Office 365 Groups created and average monthly usage. It’s great to see customers getting value out of the service. If you are using Office 365 and haven’t yet moved traditional Distribution Groups (also known as Distribution Lists or DLs) over to Office 365 Groups, here are a few of the advantages of making the move.

1. Every Office 365 Group has a shared mailbox with a searchable history of email conversations within the group, so new members have access to all of the content and context that predates their membership

2. By default, Office 365 Groups are ‘public,’ i.e., discoverable for users within your Office 365 tenant. That makes it easy for people in your organization to search for a topic name and/or description and join any related groups.

3. Office 365 Groups provide a convenient self-service option for an organization’s users to create new groups, as well as join or depart groups

We’ve listened to feedback that customers want an easy way to transform traditional Distribution Groups to Office 365 Groups and have recently added two sets of tools to meet this request. 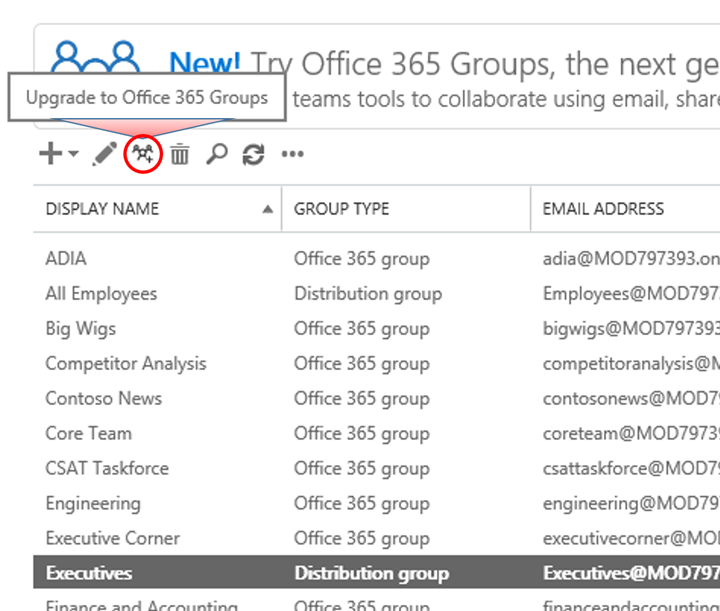 At the current time, traditional Distribution Groups with the following capabilities won’t upgrade to an Office 365 Group, but as we add these capabilities to Groups, migration support will follow:

We are not able to migrate security groups to Office 365 Groups at this time, but are looking at ways to do so. Also, for customers with a hybrid infrastructure, migration will work for the Distribution Groups that are based in Office 365; but not for those based in the on-premises infrastructure. You’ll need to delete or rename the on-premises Distribution Group and create a new Office 365 Group in Office 365 using the same membership.

It's becoming too much and really annoying, we only go in there to get the job done and get out again. It's already slow enough!

Our customers are asking us how to disable all these rubbish features you're introducing because they want to see a lean and clean view with none of the bloat and noise on the sides.

Groups is awful, the new Outlook web app is messy enough and looks like it's been designed by a pre-schooler. New users we're onboarding to Outlook web app are hating it. Especially the older generation of users who might not be tech savvy.

1 Like
Like
Not applicable
Sorry that sounded very ranty, I should say that I actually like the concept and potential of the new collaborative Groups, it's just the way it's being rolled out that is untidy.

From an administrative point of view it would be great to get some PS reporting ability, in the Portal they just show up as a regular group.

0 Likes
Like
Not applicable
I agree with Anthony on the administration front
0 Likes
Like
Not applicable
I don't see any benefit to these new groups. We don't want people joining a group just because they feel like it - that's great for Yammer but not for distribution lists designed by management to send messages to controlled lists of users about topics which specifically only apply to a subset of our users. And I see nothing about these new groups which indicates it makes it easier to allow us to send email notifications to a designated user when it is their turn to take action on a workflow in SharePoint. (But then, from what I've seen, I wouldn't be surprised to find that we're actually considered dinosaurs for continuing to use SharePoint workflows and InfoPath forms and that Microsoft is probably going to do away with those features before too long.)
0 Likes
Like
Not applicable
Hi,

Can you confirm how we should expect to see/access this menu please in the O365 portal. Cannot see the upgrade option anywhere?

We are starting to see some benefits from O365 groups and would like to upgrade some of our current groups but cannot find this menu, also are there any details on there to find the Powershell scripts?

I already run some automated powershell to limit the exposure of them with Ent. Customers.

And it is really annoying that if you try and make a DL with ECP it defaults to 365 groups (rubbish).

0 Likes
Like
Not applicable
All I wanted to do was add a member of staff to a distribution list and I cannot see any help and it has all changed since I set up the list in the first place.

I have now read so much stuff that means nothing to me and helps me not one jot this week that I just have to remember to add the new person as a separate name on the message each time - I have other things I must do with my work time today.

All my DG show up in 365 exchange management, not a single group showed up as available for migration. There is only one user as a member, owner, and they are on 365 (not on prem), there is no nested dl, there are no special characters, there are no shared mailboxes, there are no sender restrictions, no security groups, nothing dynamic, join memebership and restrictions are not closed.