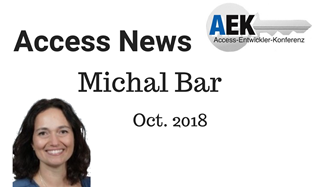 You can watch the video of Microsoft's Michal Bar presenting news on Access 2019/365 at AEK 21. There are also some pictures showing the two conference weekends with 210 Access developers and a page with details in wonderful German. ;)

@Karl Donaubauer, thanks so much for sharing the video, photos and link to session recaps for AEK.

Are there any other videos, PowerPoints or samples for the other AEK21 and DevCon presentations (recently or even much older ones) which are or might become available?

With AEK as the largest of the Access conferences, it makes we wish I spoke German, as I would have loved to present or attend. However, at least we do have Access DevCon in Vienna as well as other conferences for English speakers, and thankfully the presentation by @Michal_Bar was in English.

Thanks for hosting this and other Access conferences, Karl, and thanks, Michal, for yet another excellent presentation on the future of Access.

@Michal_Bar, thanks for providing us with a glimpse of what's ahead, as well as a summary of the many Access advancements of late, in your presentation at AEK on the recent and upcoming advancements with Microsoft Access, at AEK, Access Day in Redmond, DevCon, Ignite and Netherlands / Access Amsterdam conferences.

I also noticed an OData connector for Microsoft Access shown there, and noted how OData was used as the provider under the hood for Dynamics and Microsoft Graph connections. Considering that, are we likely to see simplified general-purpose OData support as well soon, or can this be provided – as it opens up Access to use with all kinds of other key data sources.

However, it seems that Microsoft Graph (as well as OData) isn't currently mentioned on the official Microsoft Access (Microsoft 365) Roadmap.  Can these be added to the Access Roadmap (especially considering it seems to have already been developed in part) to help increase awareness of this upcoming major enhancement?

I believe the more attention the better, when it comes to demonstrating Microsoft's continued commitment to developing new and exciting Microsoft Access features and alongside and integrating with Microsoft's rapidly growing portfolio of Azure-based offerings and other cloud services.

You have already done this to a large degree by providing much-needed support for Microsoft Dynamics and Salesforce. That has been a big help, as I've see, for example, clients decide on going with a Microsoft Access in large part due to the possibility they could integrate with Salesforce (if/when their organization was to ever adopt Salesforce).

Similarly, simplified, general-purpose OData connection support opens up the doors to countless other cloud & web data sources (where ODBC isn't an option) – Microsoft, 3rd-party and custom – in the same way that ODBC has proved critical for enabling connections to a wide range of a other databases.

Also, will Microsoft Graph and OData connections be made available for all Office 365 editions (including Home, instead of limiting to Office 365 ProPlus like with Salesforce and Dynamics)?

Additionally, will Linked Tables which were set up with supported editions ( like Office 365 ProPlus) still be able to function on all Office 365 end-user PCs regardless of edition (so including Home edition) – or can you provide support for that – so that, for example, pro developers can rely on end-users being able to still use such databases via VPN at home the same as would from in the office?

Also, can you provide an idea of when Microsoft Graph and OData support might be available for Office Insiders?

@Michal_Bar, is there any chance of seeing Microsoft Access sessions at Microsoft Business Applications Summit 2019, alongside Excel, PowerApps, Dynamics and Power BI?

Especially with Microsoft Access' new support for Dynamics (and soon Microsoft Graph) connectors and Power BI integration (as a data source for it via On-Premises Data Gateway, not to mention ability to embed Power BI dashboards/reports into Access forms via Web Browser control – though Modern Charts reduces need for that), I believe that Microsoft Access sessions would be a highly relevant and useful addition to the Business Applications Summit session lineup.

On that note, is there any chance we may see support for Microsoft Access as a data source for PowerApps & Microsoft Flow in future? Considering that Microsoft Flow and Power BI share the same On-Premises Data Gateway as Power BI (and are able to support even file data sources like Excel, CSV, and PDFs), I would think that Microsoft Access support could be provided as well, just building upon existing On-Premises Data Gateway support for Access.

With PowerApps being pitched as an alternative to Access Web Apps, I would think that such support for Microsoft Access as a data source for PowerApps and Flow would be an especially high-value feature to provide.)

> Are there any other videos, PowerPoints or samples for the other AEK21

> and DevCon presentations (recently or even much older ones) which are

Yes, there are 153 free downloads available at the AEK download page. These include all slide decks from AEK 2 to 21, many demo files, code samples and extended scripts up to whitepapers. At the top of the page there are history links to all past AEKs with session descriptions etc.

And the best: It's all in German! ;) i.e. several thousand pages of Access wisdom that have contributed to nourish the German speaking Access community for 20 years.

BTW There are also 87 free German downloads from our SQL Server and .NET conferences, which are spin-offs of the AEK.

Thanks for the links, Karl.

Though I don't speak German unfortunately, all those resources are certainly great news for the German community and hopefully they may help to some degree for English speakers such as myself.