Turn on suggestions
Auto-suggest helps you quickly narrow down your search results by suggesting possible matches as you type.
Showing results for
Show  only  | Search instead for
Did you mean:
Scheduled Task to Remove Old IIS Logs for WSUS has been Updated for SBS 2008 and SBS 2011 Standard
By

The scheduled task runs a VBScript named WBSLogCleaner.VBS. This script takes an argument which is number of days of log files to keep. 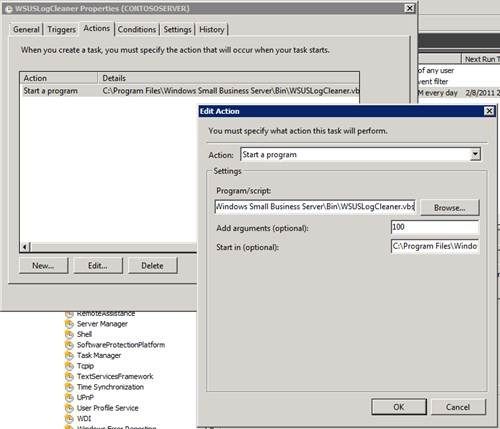 By default, on Small Business Server 2011 Standard, this value is set to 100. The value can be reduced if necessary. The script will run every night and will remove any IIS log file associated with the WSUS administration website that is older than 100 days.

Small Business Server 2008 Update Rollup 5 was released In January 2011. This update rollup installs and configures the same scheduled task as in SBS 2011 Standard. In SBS 2008, the scheduled task is configured by default to use an argument of 30 so it will only keep 30 days of log files.

The script will log the results of the execution in the following file: c:\program files\windows small business server\logs\wsuslogcleaner_script.log

In some cases, the script may be unable to locate the WSUS administration website. If this happens, the script will fail to cleanup any of the WSUS IIS log files and will log the following error in the wsuslogcleaner_script.log file: