I am Sandeep Chalke from Microsoft Data Access Support Team. My team deals with issues that arise while accessing data from SQL Server.

I hope many of you should be acquainted with SSDT (SQL Server Data Tools).  If not, please visit http://msdn.microsoft.com/en-us/data/tools.aspx for details.

Two weeks back I faced an intriguing issue related to SSDT. One of my customer opened a support ticket  in regards to poor performance with SSDT while deploying the database to SQL Server using the SSDT generated deployment script.

The customer was using SSDT from Visual Studio 2013. When SSDT created the deployment script, a lot of temporary tables with suffix "tmp_ms_XXX_" were seen.

After spending lot of time experimenting with the properties of SSDT project, I could nail down the issue.

Every SQL file included in the SSDT project has few properties, like "ANSI Null", "Quoted Identifier" etc. which are set to "Project Default" by default.

File Properties in the SSDT project for the SQL file 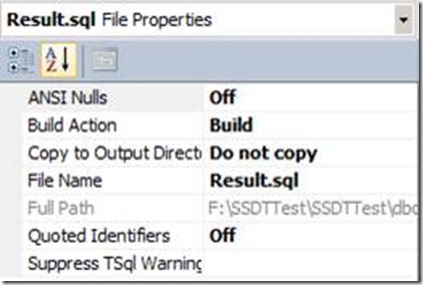