Turn on suggestions
Auto-suggest helps you quickly narrow down your search results by suggesting possible matches as you type.
Showing results for
Show  only  | Search instead for
Did you mean:
Confusion around Initial Values marker in SAP Table Definition
By


Lately we had some interesting discussions between our SAP Basis Team and some of our SAP developers. Reason was that there were several different opinions around what the column ‘Initial Values’ in the ‘Fields’ tap in SE11 really means (see below) 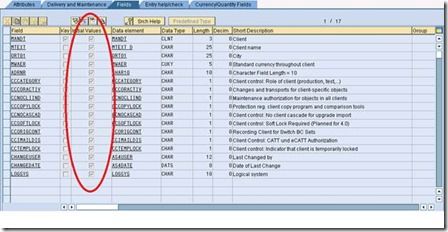 Therefore let’s dig a bit deeper and explore how that column impacts how the structure looks on the database. The scenarios and behaviors we are about to display and discuss are generic in the SAP Data Dictionary and NOT dependent on anyone of the different underlying DBMS systems


In order to do so, let’s distinguish several different cases:


When creating a new table through SE11 and defining columns with ‘Initial Values’ check or unchecked like here:

The resulting database object will always have ALL columns set to NOT NULLABLE and default values assigned to it.


Hence it really doesn’t matter whether the ‘Initial_Values’ is checked or not.


So we got our table defined and now realize we missed some columns. The table does not have any rows in yet, so we simply go into SE11 and add another two columns like these: 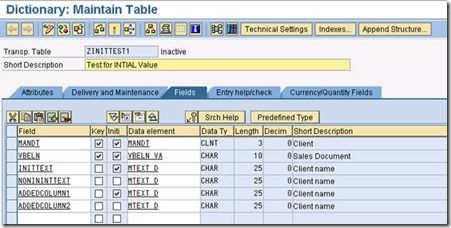 As we did not check the database object that got created during activation, we will end up with two added columns again which are NOT NULLABLE. Means again the SAP logic in the Data Dictionary simply ignored the settings in SE11 ‘hints’ for ‘Initial Values’ and decided on its own to create non-nullable columns and assigned a default value to it.


Sceanrio 3: Appending Columns to a table with data in it


In this scenario, we got data in the table and now want to add columns to the table with data in it. We again would try to add two columns of which we flagged one in ‘Initial Values’ and the other one we didn’t. Like displayed here: 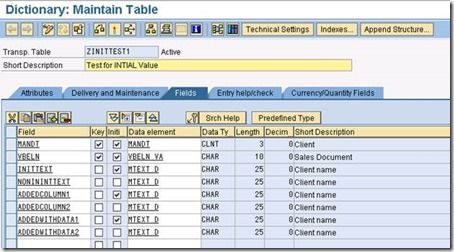 As we activate the table and check the table as it exists on the database, we see a different behavior compared to our scenario #2. The column ADDEDWITHDATA1 where we flagged the ‘Initial Values’ field is becoming a column which on the database will be NOT NULLABLE and a default assigned to it. As such this is not a different behavior as before. However the column ADDEDWITHDATA2 where we didn’t flag the ‘Initial Values’ now became a nullable column on the database without any default values assigned.


In order to push this different behavior, it doesn’t take a lot of data in the table. Actually it only needs one single row in the table.


There also might be situations where a new key column needs to be added to a table with data. Even not checking the ‘Initial Values’ like shown in this screenshot” 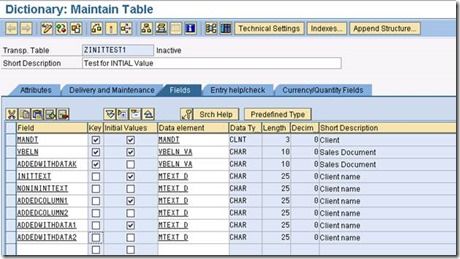 Checking the table as it got changed on the database, two things are noteworthy: