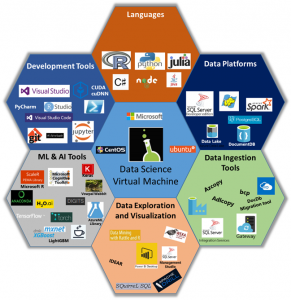 The main highlights of the Windows 2016 DSVMs

• Unified CPU/GPU image that can be deployed on CPU only VMs or VMs with GPUs. Drivers for GPU, GPU versions of popular deep learning frameworks (CNTK, TF, Mxnet) are preinstalled in the image.

• Windows 2016 comes with containers support.  So, you can run Windows Container on the DSVM. With this feature you have  the ability to run Windows container from docker hub or Azure container registry and the VM has all the container client tools.

• Windows 2016 UX is similar to Windows 10 look and feel. So it should be more familiar experience to those users who are familar with windows 10 on their laptops/desktops.

•  Office 365 (Proplus) which comes with Excel 2016 (and Word, PPT, Onenote) is now preinstalled. You just need to activate it with your Office 365 credentials or for lab installations IT Support staff can simply add a valid Office license when the DSVM is  run for the first time.

A blog was published by the engineering team last week announcing the new DSVM version. You can find more details below.

If your interested in testing and installing the Windows Server 2016. The product listing page is: http://aka.ms/dsvm/win2016