Turn on suggestions
Auto-suggest helps you quickly narrow down your search results by suggesting possible matches as you type.
Showing results for
Show  only  | Search instead for
Did you mean:
Bristol Quantum Gameathon
By


In a run up BQIT - The Bristol Quantum Information Technologies Workshop  18-20 April 2018.

BQIT is aimed at answering everything you need to know about the emerging field of Quantum Technology.

Design a novel game involving creative use of quantum principles. The game should be fun to play but also educate the player(s) about quantum mechanics and/or quantum computing. Specify your target level in your game description; it may range from elementary school to university levels.

First, think of an idea for a game. The game should be easy to learn and fun. It must also be programmable. You will not program the game the day of the challenge, however it must be amenable to later being programmed. You must also creatively employ quantum principles in your game. Determine the player(s), the rule(s) of the game, the goal(s) of the game, and the objective and strategies. Is this a game one can “win” or is it a game with many possible outcomes? The sky is the limit here! At the end of the challenge day, you will be asked to hand over a one-page write-up of the game, describing the player(s), input, output, objective, rules, etc.

A write up from Sam Pallister part of the Winning team of the ideathon.

Our team was composed of fourth year PhD students in the Quantum Engineering Centre for Doctoral Training, University of Bristol:

At the beginning of March 2018, the inaugural Bristol-Microsoft “Quantum Gameathon” was held - an event aimed at PhD students whose specialism was in quantum information and quantum computing. 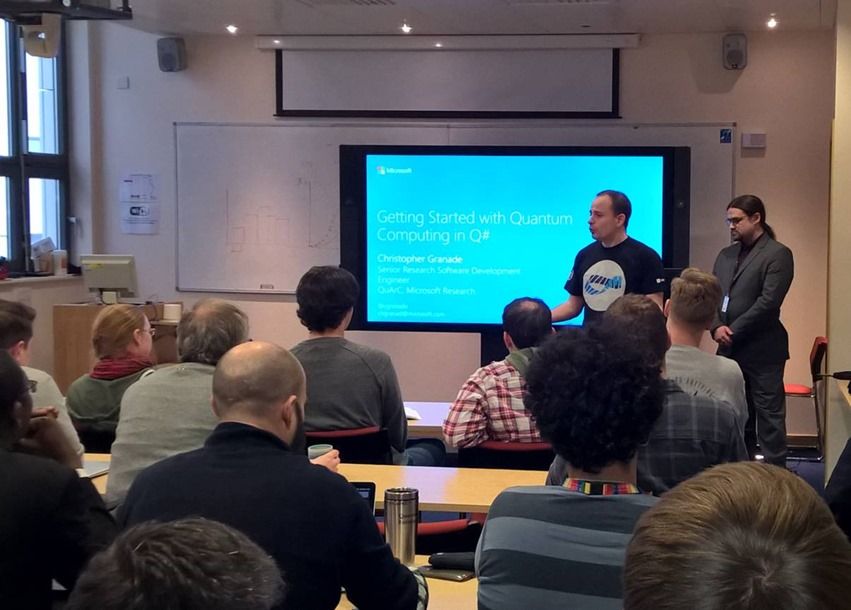 The brief was to develop a concept for a video game with mechanics that relied on quantum physics in some way. Beyond this, the details were left up to us to decide - the game’s aims, scope and intended audience were open to interpretation. 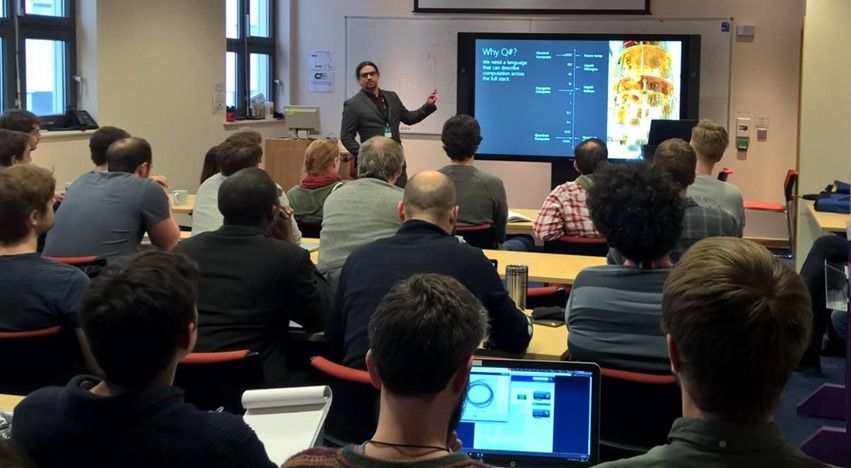 We began by rapidly brainstorming sets of ideas, topics or phenomena from quantum physics that we thought might operate as interesting game mechanics for a general audience; things such as superposition, entanglement, quantum teleportation, interference, and a smattering of algorithms that might run on a quantum computer.

Alongside these, we also brainstormed different popular games and their mechanics as inspiration and for any interesting ways some quantum element could be added. How might bomb explosion wavefunctions interfere in a quantum version of Bomberman? Could you somehow incorporate entanglement and teleportation into a side-scrolling puzzler similar to “Braid”? Would playing Tetris with blocks in superposition make any sense, and more importantly, would it actually be any fun?

This initial process was influenced by a few factors. Firstly, we collectively have experience in both experimental and theoretical quantum physics, and so the ideas we brainstormed ranged from very abstract, mathematical ideas to real phenomena observed in the lab. Secondly, we all have experience in outreach, so we didn’t find it too difficult to find an angle that might make a difficult concept accessible to a general audience, or to winnow out ideas that might be too complex to get across in a faithful way.

Once we had an initial set of ideas, we frantically started hashing out half-baked game concepts, but we very quickly found our first roadblock. We found it reasonably straightforward to conjure up a concept that either: (a) looked to be fun and engaging; or (b) faithfully represented the underlying quantum mechanics; but not both. For example, it is not too difficult to imagine a simple(ish) puzzle game that relies on understanding basic quantum information concepts such as those listed above which faithfully represents some qubits' evolutions. However, once those initial "tricks" have been learnt and combined in a few interesting ways, where does a player go from there? Do you require them to unknowingly enact some quantum algorithm to win the hardest levels? Once the player has played through each stage once, is there any incentive to play again?

Rather than struggling with this conundrum by continuing to scatter-gun game concepts, we opted to take a step back and clarify exactly what we wanted from the game. We spent the rest of the morning collating a list of “Needs/Wants”; i.e. qualities that we thought the game was compelled to include and those which would be beneficial but not necessary. Here’s what we came up with:

· Creative use of some fundamental quantum building blocks

· Feature both theoretical and experimental aspects of quantum computing

In short, we wanted to focus on a game where (a) the player is unaware that they are gaining familiarity with quantum mechanics; and (b) there is a grounding in a familiar context, as the quantum game mechanics were enough to derive novelty and enjoyment in themselves. With these criteria in mind, we conceived of “Cats: Quantum Supremacy”.

“Cats” is a turn-based, player vs. player strategy game that leverages quantum concepts to help two players blow each other to bits, inspired by the classic “Worms” game series. Each player is given a team of five ‘cats’ that they can control. The aim of the game is to use quantum augmented weapons to destroy the other team’s cats and achieve true quantum supremacy. 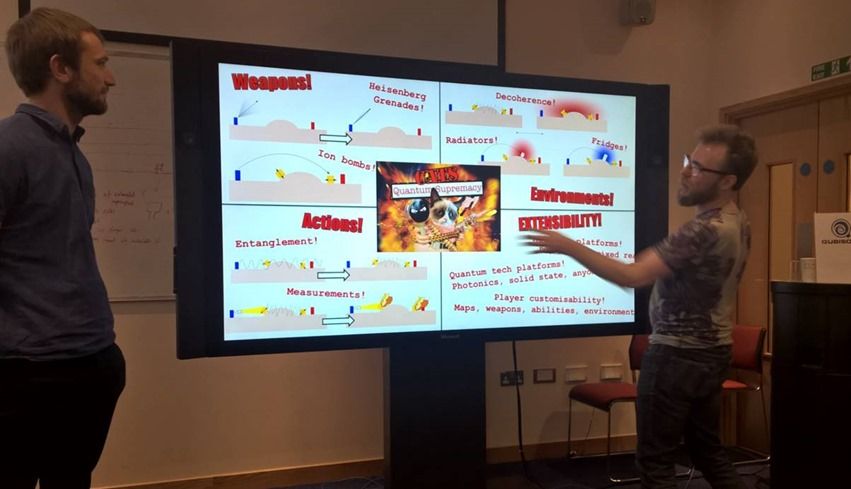 Our goal for this game was to not only include game mechanics from quantum information theory, but also that represent physical implementations and limitations for quantum technologies. We took this approach in order to generate interest from both an audience interested in fundamental aspects of quantum computing, and one interested in experimental advances in quantum technologies. Generally, when designing and fabricating quantum technologies, the designer must maintain coherence in order to carry out a particular quantum task, against the action of the environment; we maintained this spirit by encoding weaponry as coherent operations available to the player, who must use them in the face of a potentially deleterious environment.

One way that quantum mechanics is involved in the game is in the weapons arsenal available to each player. Two examples of weapons are the ‘ion bomb’ and the ‘Heisenberg grenade’. The ion bomb is a weapon that introduces the players to the fundamental principles of superposition and entanglement as well as the platform of ion traps. The ion bomb weapon operationally acts as a qubit, exploding in one of two opposite directions along an axis upon measurement. Bombs are initialised in a coherent superposition of these states and measurements are an action that can be performed by a player on their turn to bombs in their line of sight. Using a Microwave Cannon the ion bombs can also be entangled with other bombs to correlate their outcome (explosion direction) and single qubit rotations can be applied to change the direction of explosion.

In contrast, the arsenal also includes continuous variable (CV) weaponry outside the qubit framework, for example, the Heisenberg grenade. The weapon has two controls when being fired by the player: how far the grenade will be launched (its momentum) and at which angle from the player it will be launched at (the position). Before firing the player is allowed to choose the precision with which these parameters can be set in a complementary fashion akin to the Heisenberg principle. The ability to launch the grenade further will mean that the angle it leaves the launch player at will be not well defined.

The environment also is an active aspect within the game, and represents the physical system in which the player’s weapons operate. Environments may be statically coded to represent particular quantum platforms; for example, a “photonic” stage may introduce constraints where entangling operations only work probabilistically, but ion bomb decoherence is non-existent. A “trapped ion” stage may include entangling operations acting with high fidelity, but a decoherence rate acutely dependent on temperature. Alternatively, these environmental constraints may be relaxed to represent specific advances in device fabrication, or locally modified by the player by dropping “fridges” or “radiators” to spatially tune decoherence rates.

Aside from specific weapons and mechanics of the game, perhaps the most attractive aspect of "Cats" is it's almost infinite extensibility. A clear advantage of a game where the mechanics are not strictly defined by the laws quantum mechanics is that a large variety of quantum effects and experimental technologies can be can be included alongside one another in entertaining and creative ways. For example, it would be easy for new devices and developments in quantum technologies to be included through updates or DLC or even from an active modding community, or perhaps different famous quantum physicists could be playable, incarnated in cat form, each with a special ability related to their contribution to the field.

In retrospect, while we’re quite proud of “Cats”, it took a few hours of heated discussion to come up with an idea that we thought both presented an interesting game concept but was also faithful to the quantum physics. The event gave us a platform to really scrutinise what we knew about quantum mechanics, how we knew it, and how we’d convey that to a general audience; which is, no doubt, invaluable experience. 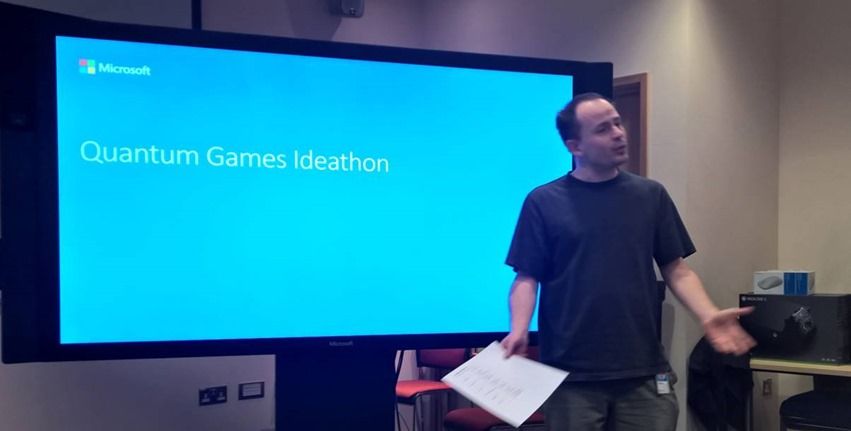 We’d like to thank both the organisers in Bristol and the representatives from Microsoft for their interest and support; we had a really enjoyable and thought-provoking day, and we hope that it leads to many quantum gameathons in the future. 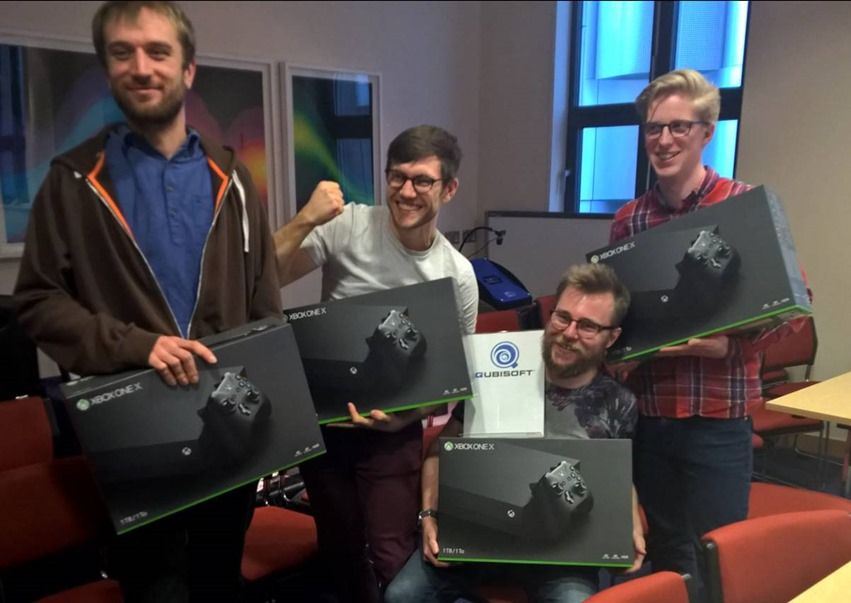 Quantum Adventures getting started with Quantum and Q# http://aka.ms/quantumadventures