We announced public preview of the new Logic Apps runtime, performance and developer improvements in September, 2020. Today, we are happy to announce the availability of a major update that continue to extend the capability of Logic Apps. You can find the highlights about this release below.
Breakpoint Debugging
You've been asking about better debugging support, and it is now available with the new runtime. When running Logic Apps locally, it's possible to set breakpoint before and after an action, and examine the input and output during workflow executions. 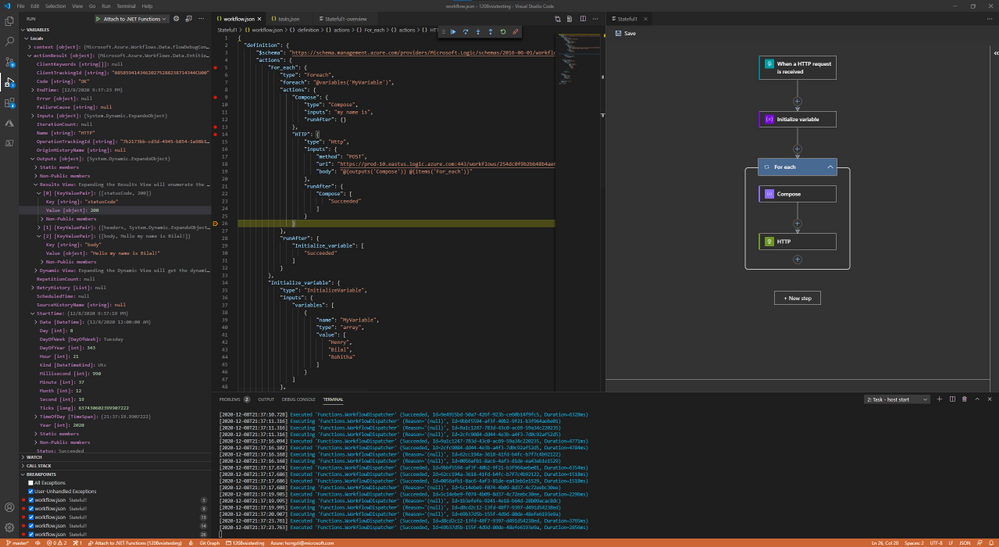 New Layout Engine for Designer
Since the initial release of Logic Apps, we see customers' implementation grow in complexity: more actions, parallel branches, extensive use of control flows and advanced configurations. After the visual refresh for the workflow designer we recently released, we decided it's time to update the layout engine to better render more complex workflows. This refresh includes only the initial work to move to a new layout engine, more improvements will come in the coming months.

Custom Connector Extension
Custom connector allows you to easily connect to systems outside of the 400+ connectors available out-of-box. With the new runtime, you can now write codeful custom connector extensions. This new approach of creating custom connectors means it runs same process as the Logic App runtime, which results in higher throughput, low latency, and local connectivity. You can learn more about this capability here.
Integration Account Support
Many of the Integration Account capabilities are now built-in. You can upload maps and schemas directly to the new Logic Apps resource, and perform XML validation, transformation, and Liquid operations without needing an Integration Account.
Cross Platform
With this release, you can develop and test Logic Apps locally using VS Code on macOS and Linux, and deploy Logic Apps to Linux container runtime as well as Kubernetes.
I want to take this opportunity to thank you for continued support and feedback as we work towards General Availability. We can't wait for you to try it out and hear what you think.
To get started, install/update the VS Code extension and create a local project, or create a new resource from the Azure Portal. You can submit your feedback here.
- Derek, on behalf of the entire Logic Apps Team
10 Likes
Like
Share
5 Comments

Thank you @derek1ee for sharing with the Community

Great, the new layout engine for the designer is very promising.

@derek1ee In the New Layout Engine example you show in the article above? How did you configure multiple inputs into an action? The runAfter property only seems to accept/allow a single previous action in the designer. Can you share the JSON for that example workflow?

Thanks for sharing. Really helpful.