Turn on suggestions
Auto-suggest helps you quickly narrow down your search results by suggesting possible matches as you type.
Showing results for
Show  only  | Search instead for
Did you mean:
WS2008: Print Management Enhancements
By

Welcome to Day Thirteen.  We have reached the halfway point of our series.  There's only two weeks to go!  Today we'll continue on with our look at Printing in Windows Server 2008 - in particular the enhancements to Print Management and the Print Management Console (PMC).

For those who have never used the PMC before, it is an MMC snap-in that enables you to install, view, monitor, manage, migrate and deploy printers from Windows Vista or Windows Server 2008.  The PMC provides real-time details about the status of printers and print servers on the network.  PMC can help you locate printers that have an error condition by using filters.  You can also send e-mail notifications or run scripts when a printer or print server requires attention.  To use the PMC on Windows Server 2008, the Print Services role or the Print Services Tools Remote Server Administration Tools (RSAT) feature must be installed.  On systems running Windows Vista, the Print Management snap-in is automatically installed and available as an MMC snap-in - as shown in the image below (a default view of the PMC on Windows Vista) 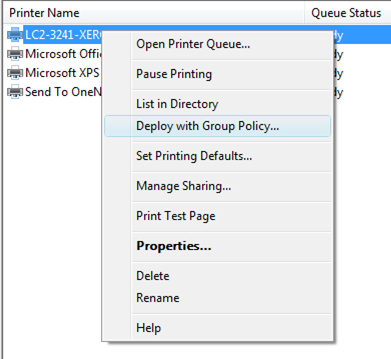 The default security settings for Windows Vista allows non-administrative users to install trusted printer drivers, such as those provided inbox with the operating system, or in digitally signed printer-driver packages.  This helps to ensure that users do not install untested or unreliable printer drivers or drivers that may have been modified to contain malicious code.  However, a non-administrative user cannot install a local printer on a Windows Server 2008 system.  This is specifically blocked by the operating system and cannot be circumvented.  A non-administrative user will not be given the option to install a local printer in the Add Printer Wizard.  This enhanced security means that sometimes users cannot install the appropriate driver for a shared network printer, even if the driver has been tested and approved for use within the environment.  To allow users who are not members of the local Administrators group to connect to a print server and install printer drivers that are hosted by the server, you can use one of the following methods:

Within the Print Management Console, you can use filters to display only those printers that meet a specific set of criteria.  For example, if you wanted to filter for printers at a specific location, or those printers that are out of paper you could use the filtering tools within PMC to build dynamic filters that return current data.  There is a new default filter included with the PMC on Windows Vista and Windows Server 2008 that displays all drivers installed on the selected server as well as the versions for the drivers (see below):

Within the new PMC, you can now filter by up to six criteria.  This is an increase from the previous limit of three which allows you to create more specific filters as shown below.  In this particular example, I want to find all of my Printers that are Shared from Servers whose names begin with PRINT that are in Texas and have a paper jam so that I can have a print technician visit each of the printers and clear the jam. 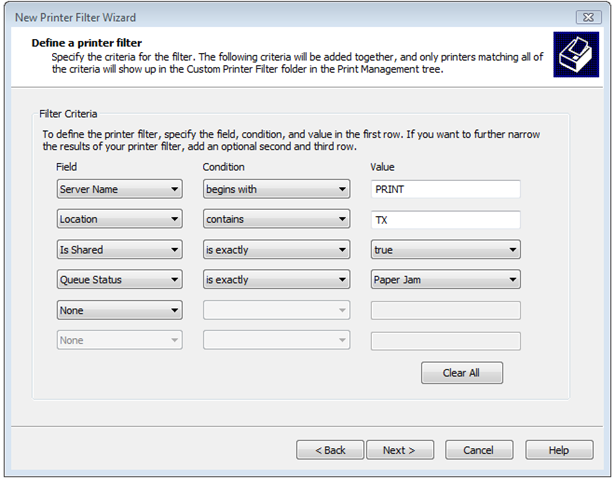 The performance of Print Management when managing or monitoring large servers has been improved also.  The sorting of printers and print servers takes less time, and you can now add a large number of servers to Print Management simultaneously by pasting a list of servers into the Add/Remove Servers dialog box.  Server names can be separated using spaces, commas or line breaks.

That will do it for this post.  Tomorrow we'll begin looking at Terminal Services on Windows Server 2008.  Until next time ...