Hi!
In the channels list you can see the number of people that have each channel as a favorite. This matters when we invite people to a meeting in a channel, or @mention th 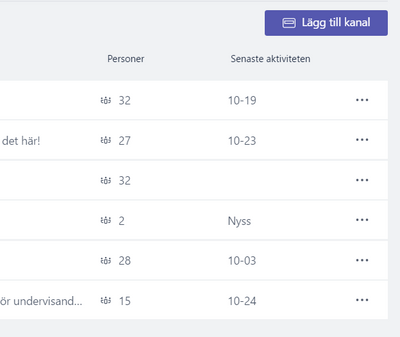 e channel. We don't want to notify people that aren't really affected by the meeting or discussion.

Some channels are favorites by default, while others are not, so I would like to know exactly how this works. Does it depend on the number of channels in the team?

When I earlier added a channel that was only relevant for three members, all team members got this channel as a favorite. Then I had to tell them all to manually "unfavorite" it.

But now that I added another channel, that I want all members to see, I am the only person that have it as a favourite. So this time I instead have to tell all members to join the channel.

I suspect that this has something to do with that when a team has more than 4-5 channels, every new channel doesn't get added as favorite. So if I create a new team I should first add the channels that the most members will use, and later add the ones that I want certain members to actively select as favorites.

But what happens when I add a new member to the team? Just tried it, and it seems (according to the "people" count) like the new member only has 4 channels as favorites. Which ones are that? It doesn't seem to be the newest channels that are left out. Is this randomly selected?

It would be great to

A - know how this works, so that I can make advantage of this, if possible

B - have more possibilities as a team owner to administrate who is affected by mentions of different channels.

Thanks for any insights on this.

Follow and Favorite interface different in mobile vs app/web!