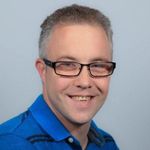 We have continued to see growth in the use of the Conversational AI platform, which powers experiences across Microsoft including Azure, Power Platform, Microsoft Teams, Microsoft Office and the Azure Health Bot service. We recently registered over 4 billion monthly messages, with 400% growth in the past year and over 85k monthly active, engaged bots.

Today, at Build, we are excited to announce significant improvements across Azure Bot Service, Bot Framework SDK and tools - including the release of Bot Framework Composer 2.0 - allowing you to get started building bots faster than ever before, across speech and text modalities, starting with the tools / services that make sense for you and enabling you to collaborate with others across your organization.

Be sure to check out sessions, ask-the-experts panels and round-tables on the topic of Conversational AI during Build 2021.

Bot Framework Composer 2.0 features a new bot creation experience, featuring all new templates which provide starting points for new bots of all complexities; QnA-style bots through to an enterprise assistant are now available. These templates bootstrap your development, with capabilities originally part of our Virtual Assistant solution accelerator, by providing pre-built dialogs and natural language models, support for common conversational scenarios, such as interruption, context switching, and even integration with Microsoft 365. 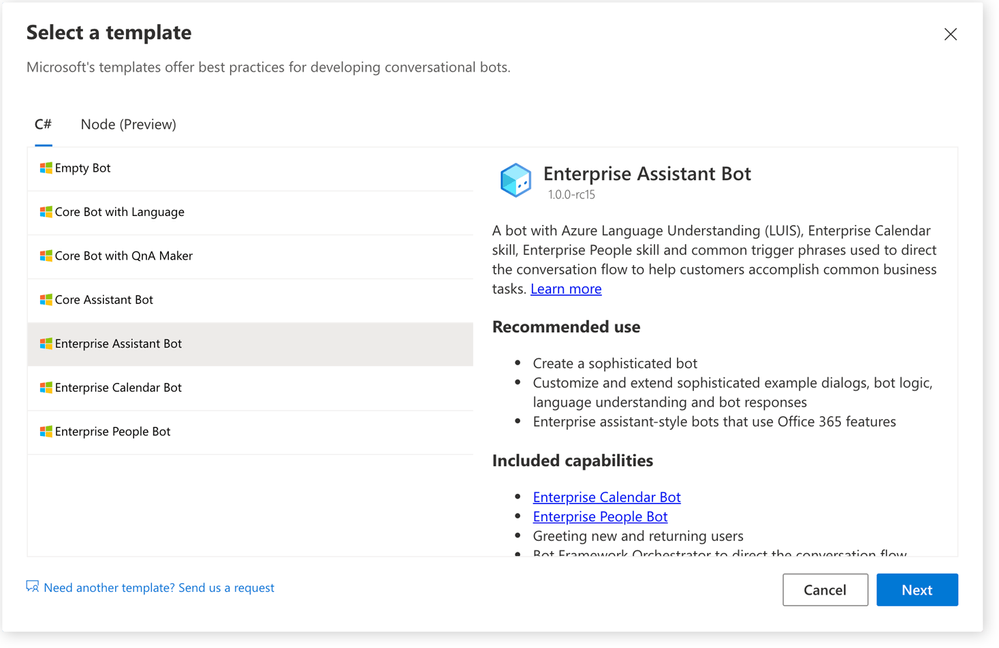 After selecting a template, Composer now provides dynamic guidance for any required or recommended steps to take as your start to build your application, such as simple integration with Cognitive Services and your bot is ready to test almost immediately, using new integrated web chat testing and debugging tools.

Publishing your bot to Azure is now easier than ever, with the general availability (GA) of integrated resource provisioning and publishing from within Composer and, once published, you can manage the connections for your bot, making it available and reducing manual steps via Web Chat, Speech and Microsoft Teams as well as many other connections available from Microsoft and the Bot Framework Community. 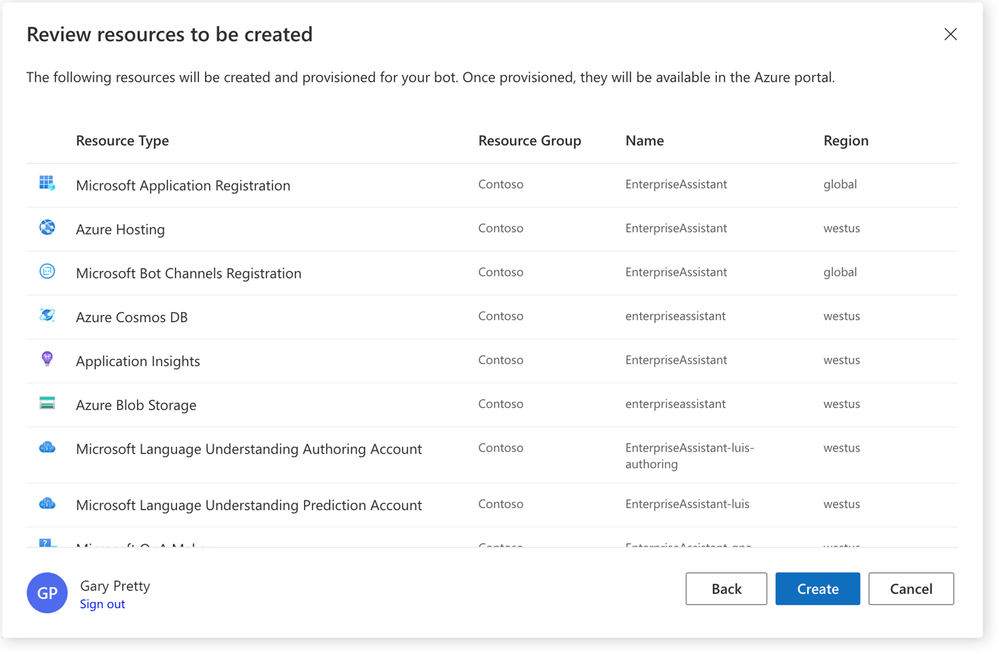 Users who start their journey within Azure Bot Service can now launch Bot Framework Composer directly from the Azure portal, with a pre-configured publishing profile available to streamline this process even further.

Ultimately, these new capabilities make is possible to go from start to a published bot, running in Azure on multiple channels, in minutes!

The need for creating experiences across multiple interaction types is rapidly increasing, such as text, speech / telephony and the use of cards. To combat this need, developers can now utilize the brand-new speech editor, which makes optimizing responses for these different modalities incredibly simple, with the ability to specify speech responses, including SSML, that will be used automatically on speech enabled platforms, such as the Azure Bot Service Telephony channel, currently in public preview.

Adaptive Cards and Suggested Actions, along with other attachment types, can be added to a response using templates built into the editor, to make for richer, interactive responses. 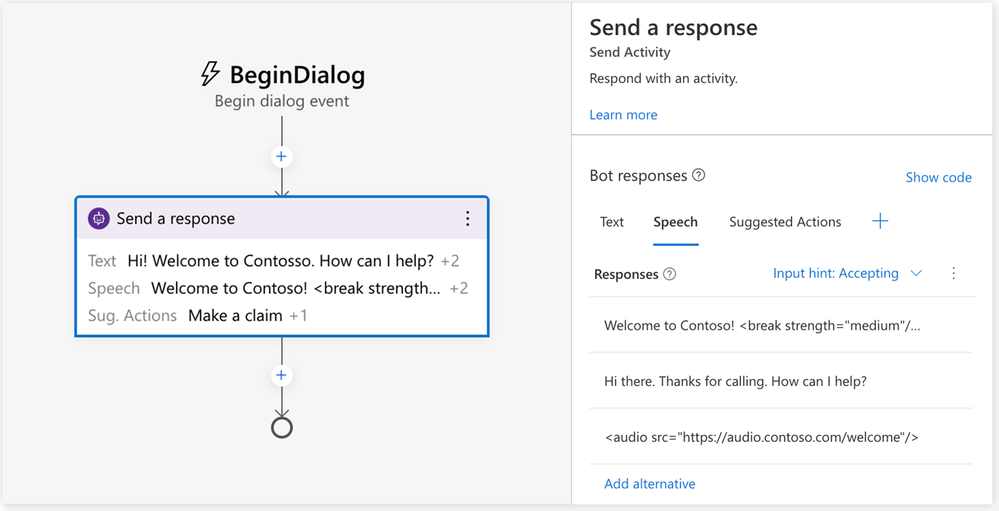 Many of the improvements in Composer 2.0 are underpinned by a new Adaptive Runtime, which provides a runtime for all bots built on the Bot Framework SDK. The runtime and SDK encapsulates common capabilities such as Cognitive Service integration and multi-lingual support, enabling developers to focus on building their conversational experience rather than the underlying infrastructure.

The Adaptive Runtime is extensible through components, which enables bot developers to easily extend their bot with code, creating custom actions, triggers, middleware and more that can be safely and dynamically injected at runtime. Components, containing any combination of conversational assets (language models, pre-built dialogs, QnA models) can be packaged, and imported into other bots for reuse.

Using the new Package Manager within Composer, developers can discover a wide selection of packages already available, including pre-built enterprise experiences for calendar management (integrated with the Office Graph), turn-key enablement of handoff to platforms such as ServiceNow, as well as context-specific packages for working with Microsoft Teams or Adaptive Cards.

Discover components to extend your bot in the Bot Framework Composer 2.0 package manager

You can create your own components and package them using the tools you already use every day, such as Visual Studio and Visual Studio Code, choosing to make them available publicly via NuGet / NPM, or sharing them within an organization with Composer’s support for private feeds.

Microsoft is the only vendor to support both PaaS and SaaS options for building conversational applications, meaning you can start where it makes most sense for you. In order to ensure these offerings work seamlessly together, last year we announced the preview of Power Virtual Agents integration with Bot Framework Composer. We are delighted that these features are now generally available (GA), alongside the ability for Power Virtual Agents to consume Bot Framework Skills.

These powerful composition options allow multiple disciplines to collaborate on a single solution, democratizing creation of some parts of your conversational experience and later this year we will further cement this by enabling bots developed using Composer to consume Power Virtual Agent topics as Bot Framework Skills.

You can read more about the Power Virtual Agents announcements at Build 2021 here.

Orchestrator is a new dispatching solution for skill dispatch based on transformer deep learning model. When utilized as a Bot Framework Recognizer, it excels at routing intents to subsequent handlers such as Skills, LUIS or QnA services. It can be used by new bots built using Composer, as well as code-first bots – enabling existing Dispatch users to switch to Orchestrator. Orchestrator is seamlessly enabled when adding Skills to a Composer based bot.

To support this use, consuming Skills within a Composer bot has also been improved, using a simplify the process of connecting skills to bots and making bots available as skills for others to consume.

Many organizations are looking to provide a centralized conversational experience across canvases for their employees. Based on our experience from the Virtual Assistant Solution Accelerator, the Enterprise Assistant template in Bot Framework Composer provides a starting point for those interested in creating a virtual assistant for common enterprise scenarios.

This new template demonstrates a common bot building architecture and high-quality pre-built conversational experiences through a root bot connected to multiple skills. This pattern allows for the consolidation of multiple bots across the organization into a centralized solution where a root bot finds the correct bot to handle a query, accelerating user productivity. With Composer, you have the flexibility to personalize the assistant to reflect the values, brand, and tone of your company.

The template is designed to be ready out-of-the-box with support for common employee channels such as Microsoft Teams and Web Chat. It includes features from the Core Assistant Bot Template and two pre-built skills, Enterprise Calendar Bot and Enterprise People Bot with more to come.

Read our detailed article to learn more about the Enterprise Assistant bot template and the new Conversational UX guide.

As bots become a critical part of their business, our customers are looking to improve their ability to operate and secure their applications. First, the Azure Bot Service team has now implemented support for Azure Monitor, Azure’s platform-wide analytics capability for monitoring, diagnosing, and alerting on system events. Your bot has access to Azure Monitor today; check out the new capability in the Monitoring section of your bot service resource in the Azure Portal.

Our customers are also interested in securing their bots. Adding to the prior work we’ve done, including the Direct Line App Service Extension for bots running in isolation, and publishing the Security Baseline for Azure Bot Service, we’re now introducing Customer Managed Encryption Keys, which allows all the data we store about your bot to be encrypted both with a Microsoft-managed key as well as a key you provide, managed in your Azure Key Vault. This capability is available to all Azure Bot Service customers today.

Later this year, you can look forward to additional security enhancements coming soon to the Azure Bot Service including support for Private Links as well as support for Managed Identities.