CPU usage rate is running high and power usage very high on several instances and causing to Teams freeze, what can I do reduce the CPU consumption memory?

Have you tried disabling 'GPU hardware acceleration' within the Teams client? 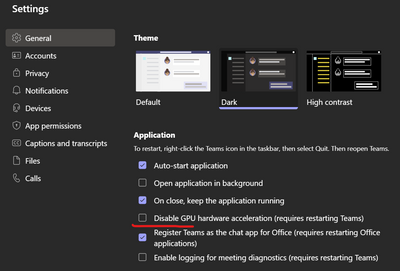 Yes, have disabled the GPU still don't have any effect
0 Likes
Reply

Can you share the endpoint hardware specs?
Teams application up to date?
Clear Teams cache?

Some additional tips you could try - https://www.technipages.com/fix-microsoft-teams-high-cpu-and-memory-usage
0 Likes
Reply

Hi there Ayenco - is this during a meeting when you see this or any time before/after a meeting/call? As others have described, could you provide the repro steps that causes you to see this and your specs? Thanks.
0 Likes
Reply

Hi,
Do you use a large screen like a 4K monitor? If so, can you try to run Teams without that if you are using a laptop. Not really a solution but it might help.
0 Likes
Reply

While it's definitely normal for Teams to increase CPU usage during a meeting, particularly any large meeting with multiple videos on as the process increases it's need/dependency on the CPU, contiguous spiking is not ideal. There's a lot of work we're doing in this space to help for long-term performance gains and usage, but for the short-term to help you currently, I'd also recommend ensuring that your Intel CPU is running the latest bits as there have been regressions in the past builds there.
0 Likes
Reply

These are the system specification you were asking for:

My earlier laptop on which I faced the issue was

My current laptop is a

My Lenovo laptop was replaced just about a month ago to address  the same high CPU usage issue I had with Teams.  The HP laptop I am using presently was issued just last month.   So, the suggestions you have shared are unlikely to make much of a difference.

My big concern with Microsoft is that whenever I report an issue on Teams, I am only suggested the very same steps:

Unfortunately, none of the above steps really address the root of the issue.

The other concerns I have with Microsoft support are:

My big concern with Microsoft is that whenever I report an issue on Teams, I am only suggested the very same steps:
1. Restart Teams
2. Clear Cache and Restart Teams
3. Clear Cache and Temporary directories and Restart Teams
4. Reboot laptop
5. Clear Cache & temporary files, reinstall Teams
6. Upgrade laptop
Unfortunately, none of the above steps really address the root of the issue.
The other concerns I have with Microsoft support are:
There is no useful diagnostic information captured (to be even hopeful of finding a resolution)
Solutions stop at workarounds
Most of the issues we are facing are discussed on Teams forums for several years now, with no permanent resolution
I have not come across a root cause analysis report
0 Likes
Reply

Hi there, both machines in which you were using should suffice and are definitely up to our required hardware specs to use Teams (https://docs.microsoft.com/en-us/microsoftteams/hardware-requirements-for-the-teams-app). Clearing cache has it's purposes, mainly for DB refreshing/policy refreshing/etc., but when it comes to performance around CPU/Memory throttling, clearing cache/restarts shouldn't have much to do with it unless there's a clear memory leak ongoing.

Can you validate when you're in a meeting, what the typical meeting load looks like? As in, multiple folks with videos on (10+?) and/or anything that could help in addition here? It might be ideal to capture a resource trace during the period to understand further around the diags as to what's occurring. Even w/ a 20H1 build, sometimes the Intel CPU binaries don't follow and it's often ideal to check to make sure it's up to date here: https://www.intel.com/content/www/us/en/support/detect.html
0 Likes
Reply

Experiencing terrible performance in a Teams meeting, with 5+ people & plugged into a 4K screen

CPU usage is going high by several instances of Teams.