Teams not showing as muted

Teams not showing as muted

I have several users that are using the Jabra Evolve 75 headset with Teams. If they try to mute themselves using the headset, like the button or putting the mic boom in the up position, Teams does not show that they are muted. They are actually muted though. Other people on the call think that they are unmuted when they're actually muted. If they click the mute button inside of Teams, it does show as muted. I've run repairs on Office, disabled/re-enabled the Teams integration with Jabra Direct, but no luck. Any ideas on this?

I don't think anything will work - I recall having the same experience. Jabra has released Evolve2-series which is Teams Certified. I'd expect that series to work better with Teams - including the muting part. Evolve-series is Skype fB certified so it is not fully intergrated with Teams in all parts.

I agree - it is annoying.
2 Likes
Reply

@Vesa Nopanen Thanks for the input. It's weird because most of our users that have the Evolve 75 haven't had this issue. Not that we've been told at least.

@jsutp88 , I'm having the same problem with my Jabra Evolve 75. It just started happening a couple of days ago. Prior to that the headset worked perfectly with Teams -- mute button, busy light, etc. were fully sync'd. Now none of my Jabra devices sync with Teams. I also have a 510 desktop speaker, which worked perfectly before. The only thing that still works is Skype for Business (which we still have because we are in transition at the moment). I've had the Evolve 75 for months and has always worked. Have done all the things you have done. I even went so far as to uninstalling and reinstalling Teams and Jabra Direct. The only thing that has changed for me is that I changed desks recently, so my hardware got shuffled around. While I tried to make sure that all of the cables got plugged back into their original USB ports there were at least two, one which goes to USB hub where the Jabra Link 370 is plugged into, that got swapped. This caused both the 510 speaker and the Link 370 to get seen as new devices again. Since that time, they are no longer sync'd with Teams.

@jmiller_siemens After testing a bit more myself I have to agree. Even Evolve2 85 doesn't show Teams muted when I raise the mic arm up and the headset states "muted".

I have also multiple devices in use so I have found out that it is not that easy sometimes to get everything work properly.

Seems like that this sync is quite delicate instead of robust. It is not a big deal for me but other attendees may wonder why I am not muted (when I am). I tend to mute people in meetings if I see their mic open - unless they are speaking of course. Now I have to consider that they might be on mute but it is just not showing up in Teams.

I had the same problem and when I checked under Settings -> Devices, I've noticed that the Audio device was now set up on custom setup, I changed back everything to the Jabra and now it works, when I raise the mic, it shows it's muted in Teams.

@DGhost, your message inspired me to go back and double-check my settings. Mine were set to the Jabra device, as you showed, but nothing worked properly - no mute, call indicator, etc. Ironically, I changed the device settings to the opposite of yours and selected Custom -- now everything works fine again. Go figure.

Same for me, I'm still struggling to understand the logic behind mute on my 510 jabra device and Teams status.
I found the related setting in device configuration but it doesn't affect the behaviour.

Hi I have a Jabra Evolve 2 65T with a Jabra Link 380c. against the "perfect" setup it can happen that muting on Teams gets out of sync.
For Android it does not work great, for Windows App it is working as expected most of the times.
Make sure your firmware is updated. You can update the Link or Headset using the latest of Jabra Direct software.

The most common reason for being out of sync when you mute manually and also pull up the microphone or pressing the mute button.

Advice: do not turn on "automatically pair new devices". I had a support case because of this option with weird re-pairing issues with my Jabra Evolve 2 65T ultimately it was bluetooth DAB radio in the neightbourhood causing this. It took the support and me several weeks to find out because we suspected every other aspect from Windows 10 multiboot to a defective device.

Thank you! this worked for me.

For me, I noticed that when I also had Skype running along with Teams (for improved camera settings), the sync didn't work anymore.
I had to quite Skype, then sync was working again.
0 Likes
Reply

For me issue was solved by installing Jabra Direct from https://www.jabra.no/supportpages/jabra-direct#/#14501-14

Then setting Softphone Integration to Microsoft Teams as follows: 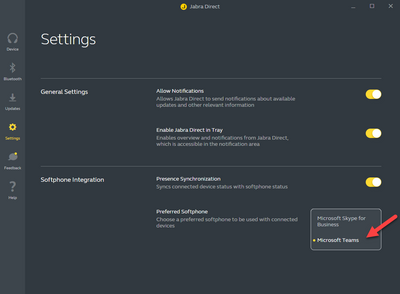 I had to temporarily quit (stop application) Microsoft Teams to be able to access the Jabra device in Jabra Direct.

For me sync between boom arm and teams mute icon was restored by simply fully shutting down Teams and restarting. Wish I'd tried that before re-installing Jabra Direct & all the tips in this thread!
0 Likes
Reply

Means that if I want to talk on a call in MS Teams I can't just lower the boom arm down, I also have to check what the mute status is in Teams and manually click on the unmute button if the two are not in sync (which is a problem about 50% of the time). It is terribly distracting for my calls, having to worry about the mute status in the software being different from the hardware.

This started happening in August 2022, though I can't be sure it first became an issue with the MS Teams 1.5.00.22362 release. Here is more information on the versions of things.

I have tried unpairing the Jabra Evolve 75 from the Jabra Link 370 and then re-pairing them. No change to the observed issue and MS Teams is still out of sync with the mute status of the hardware about 50% of the time.

I have tried connecting the Jabra Evolve 75 directly via bluetooth instead of through the Jabra Link dongle. No change to the issue.

I have tried a USB wired connection for the Jabra Evolve 75. This does seem to improve the frequency of how often the mute in MS Teams is in sync with the hardware to about 75% working and 25% failure, but even at 25% failure this is a problem.

I realize the headset is the UC and not the MS version, but this issue with the software mute status not being in sync with the hardware mute status was not a problem over the previous 18 months. Seems like a software level issue happened in this time causing this issue.

I have also tried disabling all audio processing features in Teams by disabling:

I rebooted the Mac after changing these settings.  No change to the issue.

I have also validated that the issue where the software mute status in Teams is in sync with the hardware mute states of the Evolve 75 UC only about 50% of the time even if the Zoom application is not running on the computer.
0 Likes
Reply

Any update on this?

I have an Evolve 65 and Teams always shows the transition from muted to unmuted when the boom mute button is pushed.  However, the transition from unmuted to muted is never updated on the Teams app, despite the headset muting.  I also wish the boom LED state would change when muted.  Perhaps off when not muted and RED when muted?

Teams Header Not Showing ( No Mute / Leave And Other Option Showing)

1:1 calls, user is muted as soon as PSTN ringing starts

Teams On Air Q&A Roundup: Behind the scenes of Skype Meeting Broadcast