Since its release this month, we've been exploring the possibilities with the Lists app within Teams, and so far it's not as cool as we'd hoped. I am finding that it only allows creation and use of lists within the Teams channel's private group/SharePoint site that gets created when a Team is created (i.e., when we created the "IT" team, it created https://xxxx.sharepoint.com/sites/IT37). I notice that when attempting to link a list outside of that private group/SP site, the tab remains blank.

e.g., the "TAA Requests" list below is one that exists in our organization's main SharePoint site, which is OUTSIDE of the "IT" team private group/SP site -

While on the otherhand, this list was created on the "IT" team private group/SP site and it displays the list's data - 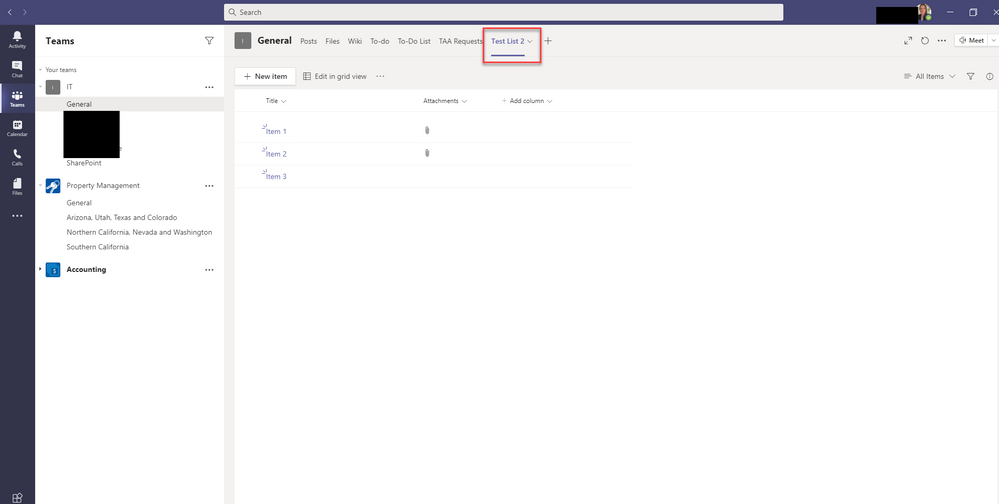 Is this by design?

Thank you in advance,

Not by design, I'm not experiencing the issue and can add any list to the tab and it is rendering fine. I did use the URL method to add my list copying the list form another site.

You might try signing out of Teams and back in after checking for updates to see if there might be something cache related causing it, but I can vouch that it def. works with other lists not in the same Private attached Team Site.
0 Likes
Reply
Highlighted

Thank you for the quick response! I checked for Teams updates and it said "You've got the latest updates. Enjoy!" I then signed out and quit Teams, installed Windows updates and restarted PC but when I attempted to add the list again, the tab is still blank. It populates the list name, but the list doesn't render. 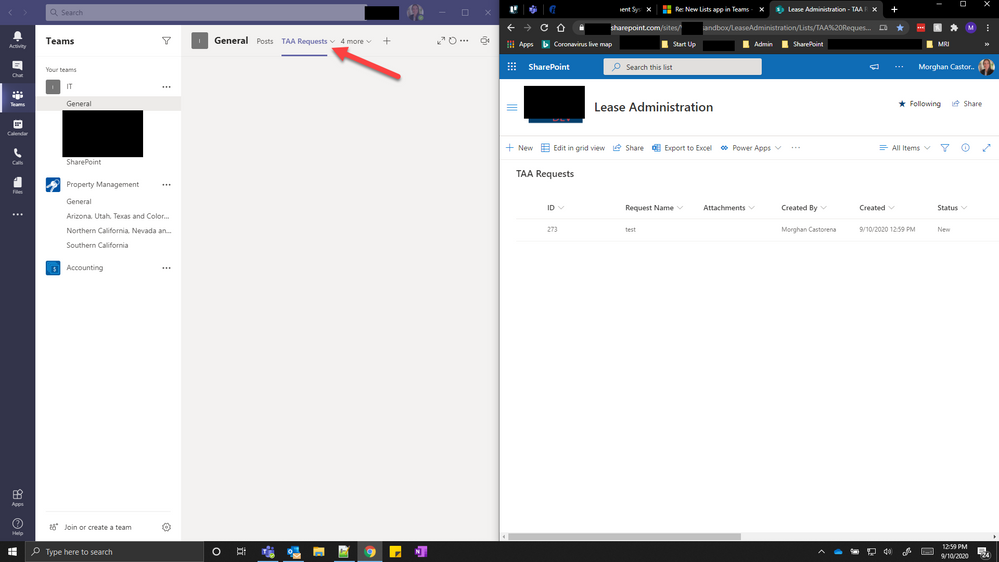 When you say you used the URL method, are you just copying the URL for the list you want from the address bar and pasting into the "Enter link here" field here? -

Yup exactly. I'm wondering what your Permissions look like on the list you are trying to add? The list I add is from our main org facing hub site where there is an "Everyone except external users" has read access to the site and it's lists. Wondering if it's possible it's a security thing that is a requirement somehow for it to show.

One Difference I do notice, I do not have the newer list UI/UX for my user account when browsing the list in SharePoint. Wondering if that has anything to do with it.
0 Likes
Reply
Highlighted

Well same thing, works in my other tenant as well. Have you tried via teams.microsoft.com web client and see if issue persists there?
0 Likes
Reply
Highlighted

@Chris Webb - I have the same issue within the Teams web client as well. The list is open to "Everyone external users" and I am the company Admin. I had our other company Admin run the same steps I did to add the list and of course it's working for him... Very odd. I will try an Office repair and see if that helps. It's definitely just me.

Very strange. Tried another machine? Incognito browser? I do know thou that some users have different SP / Teams builds, like I don't have new SP Lists experience, but my other IT Team members do, so if another machine, it might be a deployment issue even still, just a hunch, but I don't know what else it could be there outside of possibly having different app policies or something in Teams but that shouldn't matter since you can add it.
0 Likes
Reply
Highlighted

@morghandc I'm having a similar problem, but not really identical:

in the numerous other teams where the lists tab was configured to add an existing list (the above), everyone can see the tab, but it is just a blank tab.. nothing loads.

lists tab works when opened in a web browser, but teams doesn't work in incognito for me (something to do with third-party cookies, but ignore me)

the strange part is if you get a user to join the original team and access the list once, the list can be viewed from all other teams of this user..

Sheesh! MS must still be working out some of the bugs... Our goal is to embed List A in Team 1, and List B in Team 2, so I will have our other org Admin add these (as it seems to work for him) on Monday and I'll let you know the results.

As another troubleshooting step, I just tried adding List A to an entirely different Team but same issue for me...

@morghandc quick update on my progress, i tried removing everyone's access to the List A of Team 1 then i re-added access for Team 2, 3, 4 and so on (via sharepoint).

i'm getting some replies saying they (those who are not in Team 1) can view List A now, within the tab of their own Team (instead of a blank screen).

will continue to monitor.

<EDIT> spoke too soon, users (those who are not in Team 1) are looking at a blank screen again..

@chilledrice  Thank you for the update. I think we'll hold off on implementing this in our org as it sounds like there are many things that can go wrong... What I'd hate to do, is add a HEAVILY used list in a very busy channel, have people notice it, but then it be broken, haha. Ill keep eye out for your updates!! Thanks again.

@morghandc Have you had any success with this?  I am experiencing the same issue, both in the Teams app and the web version.

Hi @deakowen - I am still having the issue. The tab is blank after I add a list.  Will check back in about a month!

Introducing Zoho Notebook for Microsoft Teams: Bring your thoughts and teams together