If I schedule a meeting in a Channel, will this automatically send an outlook invite to Team members?

If I don't manually add anyone to the team, but just add the group as a whole, will this automatically send an outlook invitation to the Team?

This is a long standing debate that no one really can tell how this is supposed to work lol. It seems rather random and I believe is based on if people follow the group or not that's attached to the Team, which they used to by default but it keeps going back and forth. People have inconsistent behavior with it, so I don't even bother and always create manual entries for meetings or we will attach an ics file to a channel chat, @ mention everyone to add that to their calendar. Microsoft is working on group calendar support for Teams, so hoping they fix all that with that implementation. https://microsoftteams.uservoice.com/forums/555103-public/suggestions/16933204-include-office-365-gr...

Actually I've seen only users with their exchange mailbox on premises will receive the invite on their email. Users with Exchange online will not receive the meeting invitation by email.

@Chris Webb Is this not controlled by the unifiedgroup attribute AlwaysSubscribeMembersToCalendarEvents ?
And I'm wondering if this was not set to True in the past then Microsoft changed it to False when creating a new team. Anyone now if that changed?

This is indeed controlled by the AlwaysSubscribeMembersToCalendarEvents. It used to be set to True by default (circa 2018) and is now False. This default change was not retofitted (to be fair that would have been even worse) so you'll likely have teams where it's set and teams where it's not. It's presumably a sysadmin job to make a decision on behaviour and retrofit. See below for problems with users doing this.

In order for a group member to receive event (read calendar) notifications in their Inbox / Calendar they need to be “subscribed” to the group to do so. If they are not subscribed the event will simply go into the Groups calendar and in the case of ‘Teams enabled’ groups, into the requisite channel too. The setting (alwayssubscribememberstocalendarevents)  dictates whether new members are “subscribed for events” by default when they are added to the Team / Group.

A subtle but very important note being that changing this setting after a member is added will have zero effect on existing members, this would need to be altered in one of two ways.

* But why would life be easy. Option one is only possible on old teams as newer groups (created via MS Teams) are hidden from Outlook clients and the Global Address List. Courtesy of the settings “HiddenFromExchangeClientsEnabled” / “HiddenFromAddressListsEnabled” which are now set to True as default. The first setting literally removes it from OWA / Outlook the latter is the GAL. Meaning neither owners or members would be able to find it.

Current behavior is that when you leave the list of invitees empty:

@Michel Gebbinck in my Organizations the employees neither get an email nor is the meeting shown in the calendars. Do you have any clue why?
0 Likes
Reply

@Sophie_Bruehl I realize your post is almost two months old but I am linking to this anyway Understanding Who Receives Invitations for Teams Meetings - Office 365 for IT Pros (office365itpros....

@asodiq Hello, first. Today one cannot schedule channel meetings from Outlook. So it must be done from Teams. The users can control the group subscriber settings themselves by going to the underlying group settings and chose the preferred setting.

For ex. when in Teams you have the option to "Open in SharePoint" using ... Then click on Conversations in the left navigation bar. Click on the three dots ... and Settings. 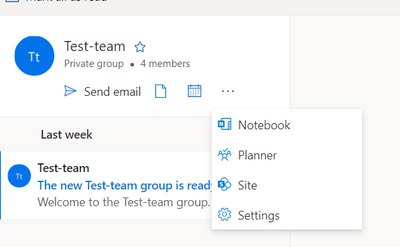 These are the subscriber settings that are also mentioned above using PowerShell as an admin. They tend to be inconsistent when it comes to "events " which explains why some gets an invitation while others don't. 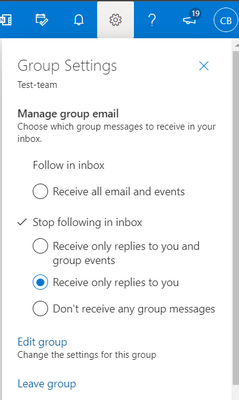