Hello people Is it possible to set up so that only organizers can admit guests who are in the lobby and not any authenticated users ? 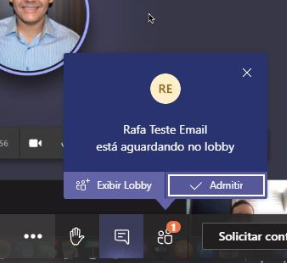 Only Organizer and Presenters are allowed to admin people from the lobby to join the meeting, not attendees. There is no way to change this to only Organizers.

Hello Linus thank you very much for your help

I don't know if I expressed myself correctly.

What is happening is that meeting participants who are not team presenters or administrators are receiving the guest notice in the lobby and are allowed to admit.

In this case, we are using Teams in this pandemic for sessions between judges with all formality and lawyers who are not members of that court are invited, and we would like that these notices were not generated to the "Participants" nor that they could admit, leaving this function only for "Organizers"

I made a simulation in this image attached with a user "TEST" who is only a participant and the admission MSG appeared to him even though he was not an admin or presenter. 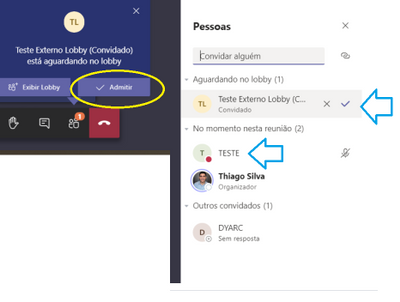 Right click on the TESTE user and select "Make an attendee" and then test if you get the option to admit people from the lobby. 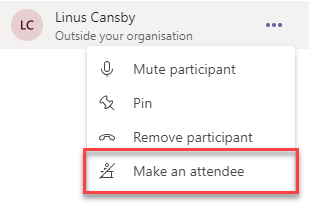 New meeting lobby setting: only the organizer joins the meeting directly
A new lobby setting is coming to Teams Meeting Options. We are adding “Only me” as an option to the “Who can bypass lobby” setting. Once enabled, only the organizer will be able to join the meeting directly. Everyone else, including people from within the same organization, will be sent to the lobby.

@Swaminathan_Arumugam I'm hearing reports of a similar issue occurring in our organization. This is a hospital where physicians are communicating with covid-19 patients and their family members via Teams. My  guess is that someone other than the organizer was able to admit this person into the meeting. I do see the option under "Who can bypass the lobby?" But this doesn't say anything about who is allowed to admit people that are waiting in the lobby.

@Swaminathan_Arumugam Thank you for your reply. I'm aware of this but it doesn't say anything about who is allowed to admit people that are waiting in the lobby. My sense is that anyone that is currently in the meeting can admit anyone in the lobby. I will have to test all scenarios.

Scenario 3: Everyone in organization can admit ppl in the lobby.
0 Likes
Reply

I can confirm that everyone in the meeting is getting the popup when someone is waiting, and is allowed to admit them.

This is a huge security/privacy issue. In our case, it was a shareholder's meeting that was admitting participants one at a time. However, unfamiliar participants that saw the popup blindly clicked "Admit" and started adding people to the meeting before they were supposed to join.

This doesn't make sense -- only the Organizer or those marked as Presenter should be allowed to Admit people from the lobby. You should not have to manually mark people as an "Attendee" to prevent this (which I don't even know if that works, we didn't try).

This appears to be the case because by default teams makes everyone a "Presenter". It looks like if we change the global policy (or individual meeting policy) for "Roles that have presenter rights in meetings" to "Organizers, but user can override", then everyone joins as an Attendee and not a Presenter.

Why the default option for this setting is to make everyone a presenter is beyond me...

@nickp-wkcan we see that who is admitting person in the meeting ?

@Linus Cansby this isn't what happens in practice.

We often have meeting attendees who decide to admit someone in the lobby (when the meeting organiser wanted to keep them there for a few more minutes.

Have we given our meeting attendees too many permissions?

Can Microsoft please look into this so that the Organiser is the only person allow to admit guest into the meeting. When a guest logs in, all attendees get the notification to admit the guest but this function should be left with the Organiser only unless other wise granted.
1 Like
Reply

@ThiagojSilva I had the same issue with my interview schedule, as we use Teams meeting for our internal Interview however we don’t want each applicant to see who’s in the lobby or admit them accidentally. The ideal is to only allow the Convenor of the interview panel to see the applicants joined and admit them in.

Add optional attendees via lobby (request for admit), while normal (to) attendees can join directly

Admitting participants to meetings with keystrokes