Adaptive Cards in Teams using "Only show when" option

Adaptive Cards in Teams using "Only show when" option

Visible/Hidden
I've got an MS flow that sends an Adaptive Cards based on the date on the list. When the Adaptive card is sent, I want three separate images to be visible/hidden based on a multiple choice column (Checkboxes (allow multiple selections)).

When I use the Adaptive Card Designer, I see the option that says "Only show when" and a checkbox that says "Initially visible". I want to know how to configure those settings so the social media icons (images) I see on the card are based on that platforms column. 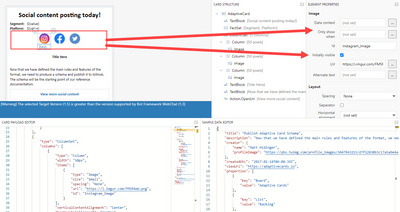 Optional but would also like:
It would be ideal if the icons were aligned based on availability. For example Facebook is the center icon, but it Twitter and Instagram were the only ones chosen, I wouldn't want a big gap in the center. Or if Facebook and Twitter were the only options chosen, I wouldn't like having the gap on the far left.  At this rate, I'd be happy to at least know how to get the basic functionality of visibility/hidden so if there isn't an easy way to do this, that's fine.

I've attached some images including the entire flow if that's helpful.
Thank you so much for any help!

Re: Adaptive Cards in Teams using "Only show when" option

Since the community has not yet responded to your post, you might want to seek assistance with other resources that are focused on tech support: