Looking for some help for a dynamics/mechanical engineering problem. I am trying to find the minimum stopping distance of a truck given two coefficients of static friction (mu) when a 50 kg sandbag is added 0.5 meters forward of the rear axle. The two coefficients represent two different tire brands.

I found an expression (that has been verified) to find the acceleration of the truck which I can then find velocity from. So once velocity is zero, I would look at the distance (s) and that is the minimum stopping distance.

I haven't set a spreadsheet up like this before and am having trouble doing so. My professor recommended making inputs, but that is again something I have never used. I appreciate any help you all can offer. Thanks! 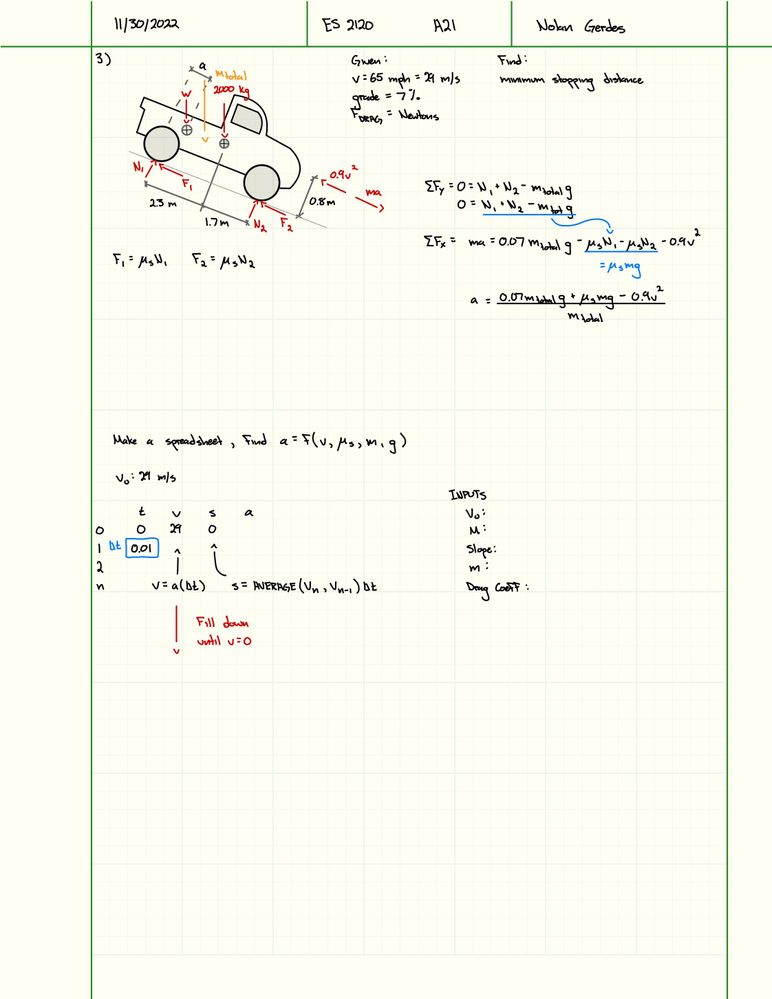 @ngerdes so first off you say you found the correct equation for acceleration but I don't think so.  It's been a loooong time since I took statics and dynamics but your sum of the Fy forces appears to add normal forces that are on an angle to the vertical with gravitational forces on the masses which are vertical ...  I don't think they add that way.  Further more you are summing them up equally and maybe they can or do end up summing that way but I suspect the whole point of specifically noting the location of the sandbag further back is to make you calculate the individual component values for the the normal forces on each pair of wheels.  I am also confused because you are given coefficient of STATIC friction but the system is in motion so you should be using coefficient of dynamic friction (you know how it is harder to get something to start moving but once it is moving it is easier to keep it moving).  So those issues aside I want to also introduce you to excel NAMES (if you don't know already).  So under Formulas and then Name Manager.  In this name manager you can add all the constants and then corresponding variables.  For example: 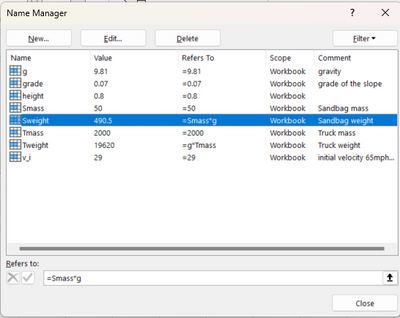 As you can see I added a bunch of the constants and then started to add some calculated values like the highlighted line is the weight (force) of the sandbag so it is g * Smass.  So instead of doing the calculation in a cell on the worksheet you can define it as a name.  You could also do it in a cell (e.g. cell D5) and then you can define a name to be =$D$5 and then use that name.

Finally it appears the prof wants you to do a sequential formula where each row uses the previous row.  So in the first row calculate or type the initial values (e.g. in D5 you type 29 or using the above names you could type =v_i).  Then in D6 you type something like =D5 - acc * dt where acc is the acceleration and dt is the time delta.  Then as you copy that cell down, each copy will refer to the cell above it (just like D6 referred to D5 then D7 will refer to D6 and so on).

I hope that helps.

@mtarler Thank you tons for introducing me to NAMES. I understand your concerns in the first portion of the comment and I thought the same thing at first. The sum of forces in the y-direction doesn't take into account the incline because of small angle approximation (i.e. it's really close to 1 so it would add unneeded complexity). For the coefficient of friction, we are assuming the truck is on an ice road and it's wheels are just about to slip, not already slipping because of modern technology like ABS. Hope that makes sense and makes you more confident in my equation.

I attached a few pictures of what my spreadsheet looks like and the equations/formulas I used. It seems like I went wrong somewhere because velocity drops to nearly zero immediately then rises as the cells move down. It should gradually decrease until velocity is zero, which would indicate the displacement (s) it traveled. 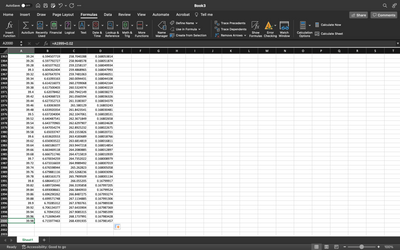 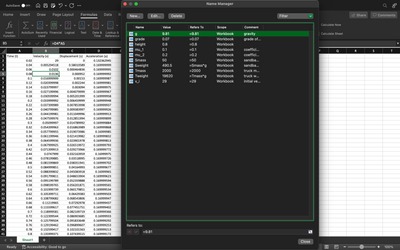 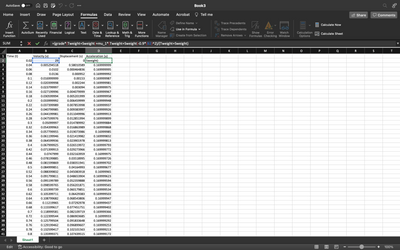 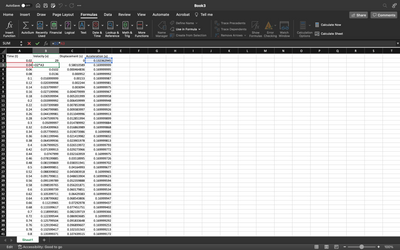 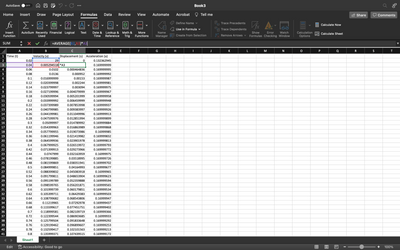 I might suggest you create a name TotWeight since you use that a lot. and i think you want to be using time change so cell B3 should be something like =D2*(A3-A2) but then again you can define dt as a name since it is a constant (you could make it =$A$3-$A$2 so if you change the step size it will automatically change with it. Another nice option is to define "Time Step" on the sheet (e.g. F1="Time Step =" and then in G1 you type what it will be like 0.02). And another quick trick/tip, with G1 highlighted you can click on the cell address in the top let to the left of the formula bar where is says 'G1' and then type "dt" and that will automatically create a "Name" called "dt" and set it to cell G1. Then in A2 you can type =SEQUENCE(1000,,,dt) to automatically create a column of 1000 numbers stepping by 'dt'. If you don't want to start at 0 then use =SEQUENCE(1000,,dt,dt)
I'm not clear why acceleration is changing. What is velocity dependent? Basically I don't get where that 0.9*V^2 comes in (looks like 1/2 m v^2 but that would be work not acceleration). I'm guessing that is another part of the problem not noted here.
Also in your notes you combine mu1 F1 + mu2 F2 to be mu*m*g which seems fine if mu1=mu2 but in your name definitions you indicate mu1=0.1 and mu2=0.2 so are the names wrong or the formula?
0 Likes
Reply