I get data from excel to create a merge print, I would know if its possible to have 2 different records in the same page because I need to use 2 or 3 records printed in the same A4, but I can just duplicate the same record, I'm not able to have different ones

hope the question is clear, if not please let me know

I'm not a super user in the slightest, but I figured I would make a response, because no one else has replied, lol. I am unable to see your files on my current computer.

However, from my experience, it is impossible to merge two or more records into a single letter. The merge has to be performed twice. I ran into what I think is an issue similar to yours--I needed information from two records in the letter. Because they are records, I ran the merge, then selected, "Edit individual Documents". I copied and pasted the data from second record into the first or vice versa. Then, print to PDF the new letter. 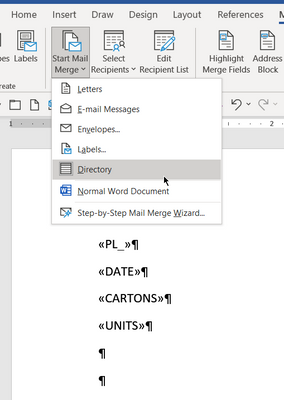 I know this was posted a while ago. Unfortunately, I was unable to view the response. There is a security block on my laptop. Thank you though for the response!
0 Likes
Reply

How to get Mail Merge to accept .jpg Logo substitution