So today I decided to update my windows from 10 to 11 and had a nightmare,
I put my pc to update and the download went normal and the installation seemed to go normal as well until it hit 94%, at that number the installation froze for about 1 hour until I looked I looked it up and many others were having the same issue, the fix was to run "services.msc" and manually start the "Windows update medic service" once this was done the installation got unstuck and actually moved up from 94% and the update seemed normal again however after a few restarts, the pc showed a lock screen that didn't load my existing lock screen wallpaper, the time on the clock didn't update and the battery percentage icon on the bottom right that you'd have on a normal lock screen was there and there was the text "Preparing Windows" with the loading spinning dots but the animation of the spin wasn't playing right under the clock. I looked it up and no one else was having this issue. Many people got stuck on the lock screen but none with the description I mentioned. I tried ctrl+alt+delete and f11 spam until recovery mode booted up but they didn't work. After contacting the Microsoft technical team, I was told to force shut down my pc and boot it back up again but as soon as Windows starts loading up to force shut it down again and repeat this process for around 4 times and then the pc booted in recovery mode, and it did. After this I was told to uninstall the update and I uninstalled the "Latest quality update". After 20-30 minutes it uninstalled and then I exited to windows 11. However the weird thing is I was shown and still am shown the windows 10 lock screen(idk if its normal) and after logging in, my screen started flickering between my wallpaper and a black screen with my cursor showing the loading icon and "Windows 11 Home" was written on the bottom right of the screen. This happened for about 2 minutes before It stopped and loaded the windows 11 UI and I got a pop up saying Critical error loading start up menu we will try to fix it the next time you log in and the option in the box was to sign out. At this point of time my taskbar was black but desktop icons were loaded. After clicking the sign out option in the box the pc black screened became normal did NOT log me out and windows 11 was loaded normally and there were no issues with anything, the Microsoft technical support assistant at this point using quick share took remote control of my pc and ran some scans on cmd checking my drivers and repairing any corrupted files (the tech support assistant was from microsoft's chat support option and wasn't fake) keep in mind in the windows recovery mode I uninstalled the update which made things so weird. Anways that's the adventure I had to do which took around 6 hours to get my pc from win 10 to 11. Feedback hub's character limit is too short to report this to the devs is there a better way to fully describe this to them without that limit? and also has anyone experienced something similar to this with their update?

I am wondering are you able to run Windows 11 now.
Normally, upgrade process to the Windows 11 is smooth and it is just few restarts, and you have Windows. However, such issue might happen, and it is not easy to say what caused this behavior. You may report this using the Feedback Hub app but write a summary like explain you upgrade to Windows 11 and there have been number of failure and it will collect and send log files (with your permission) where the Windows team could investigate on what caused this issue.
0 Likes
Reply

@Reza_Ameri Yes, I can run Windows 11 normally now despite all the weird things that happened and I have used feedback hub to summarize whatever I said over there...however is this normal when alt tabbing? 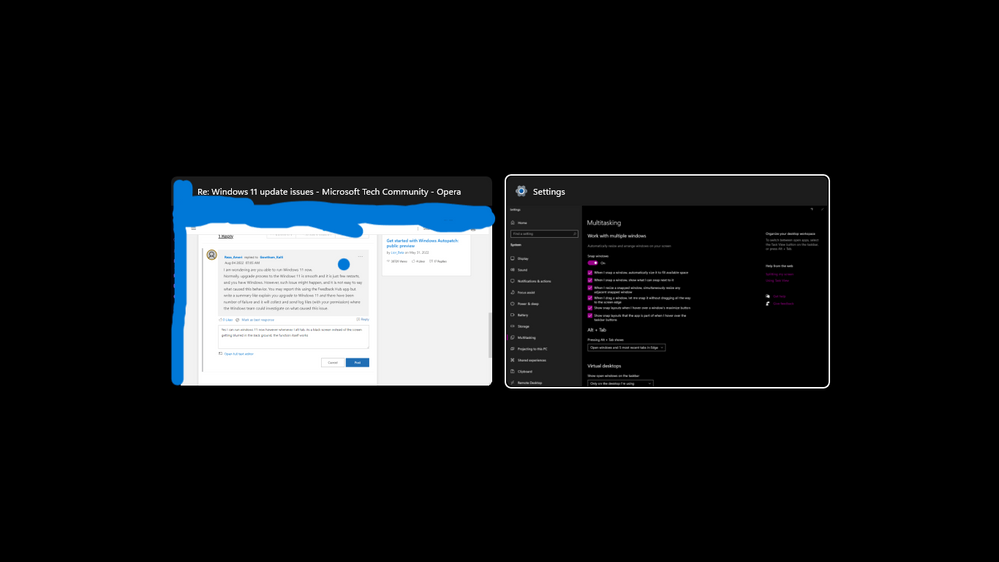 The background being completely black instead of becoming a blurred version of the opened tab?

This issue might be related to the graphic card driver.
Try update Windows and Graphic Card driver.
0 Likes
Reply

thank you for wanting to help improve your Windows experience!

Thank you for getting here!

The best way to help improve and fix errors -> is to change the privacy settings ( please enable optional diagnostic data ) your computer will automatically and anonymously forward diagnostic data and error logs to Microsoft.

Writing in the feedback center without diagnostic data is of little value in this case!

Stability in games after new update

CPU Usage on 100% and CPU showing 1 core instead of 4 cores . Please Fix this Issue Immediately