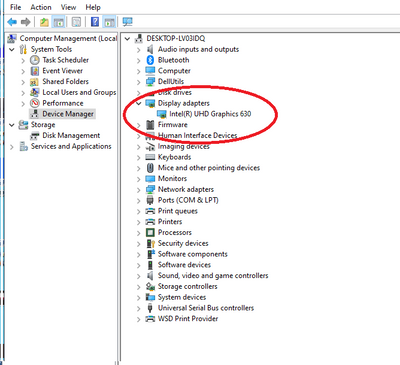 The above display adapter comes up automatically. I delete it, install MS default display and it comes right back whenever I am connected to net. Unplug net and both my monitors come right up. Plug net back in and #1 (Asus) disappears. Turn off #2 (Sceptre) and #1 reappears. Only when net is disconnected can I get both monitors to show.  Tech's notes below.

Taken off splitter. Only have one monitor on each cable.

Uninstalled and deleted driver for U630 Video card after unstallingu630 driver and rebooted into windows with no inet. (System runs fine under MS default driver. If machine not plugged into Inet.)

If plugged into Inet, driver is reinstalled from someplace and 2nd monitor no longer works in windows.

Made new power plan. With settings set to high.

Swapped out grey cable with another HDMI cable on Asus monitor.

Took check mark out of desktop in onedrive back up.

Removed programs you don’t use any longer

Used Msconfig to turn of UAC.

Tried that, but tried it again. As soon as I turn on the second monitor the primary loses signal. It is the Intel Display that I can't get not to load. Turning it off does not do it.

Thanks for the suggestion, but it does not change anything.
0 Likes
Reply

Which is the exact model of your computer?
How do you connect both monitors? Which cable at which port?
0 Likes
Reply

Apparently this computer only has 1 HDMI port: 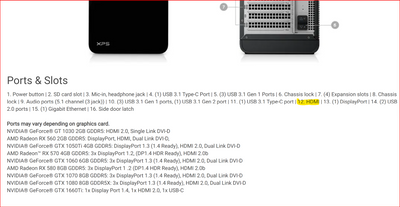 Did you add any device? Did you try to connect the secondary monitor with DVI?

I suppose you should also investigate with Dell support.

thanks. one hdmi. one arc. i came out to asus with hdmi 1 and sceptre with arc. worked for months until july 21 update or thereabouts. not sure when it crashed. I guess i will do a factory reset. thanks for trying to help. cliff
0 Likes
Reply

If you wanna help me to help you, you'd better answer to my questions.

Ad stated, get in touch with Dell support: they might know more than us.

Sorry. No device added. Yes, switched cables with same effect. I took your last sentence to mean you were stumped and I should go to Dell. Did not mean to ignore your efforts.
0 Likes
Reply

Let me know what Dell will suggest.

Will do. If I contact them. I may just do a factory reset and let that take care of the problem. If it does not I would be forced to contact Dell. After <+/-> three years it is running a bit slower, so a factory reset would not be a terrible thing to do. I appreciate your efforts in any event.
0 Likes
Reply

Getting full control over MSIX updates with the App Installer APIs

The Windows Update policies you should set and why

Why you shouldn’t set these 25 Windows policies