I've been an admin for older, on-prem versions of SP for many years but am relatively new to SPO. We're trying to migrate a user group off of a legacy version of SP onto SPO and I'm trying to create a SP Tasks list, and have a question.

I've created a SP Tasks List and added multiple columns to a form for users to complete when adding a new task. Our goal is for SPO to send an email to a particular individual once their name is added to a particular field on the form, but I don't know how to do that.

So, I have a two-part question. a) What is the default action necessary to assign a task from a SP Tasks list to an individual? b) Can I designate when a field (column question) in the task item is completed, it assigns that task to the individual whose name has been added to that field?

I'm not sure I'm being clear, so let me give you an example:

I have a SP Tasks List named 'tasks list'. I added several columns to the list for users to complete when they create a new task in the list. One of the columns/fields the users fill in is called 'scheduler' where they add the name of a fellow employee in our AD named 'bob'. Once the new task is saved, can I have an email notification sent to 'bob' telling them they have a task assigned to them?

Is there an easier way to do this besides setting up a workflow?

I didn't think that the Tasks list for SharePoint Online worked any differently than it's server based predecessor.  I'll set something up on my own tenancy tomorrow and will see if I can work out the default trigger.  I always thought it was the provision of a name from the address book but that's nothing more than recall from several years ago.

As for alternatives, you might consider setting up views which are specific to a named individual and then configuring an alert to fire whenever a new item meets that view criteria.

Thanks. In this particular instance, the user is on the free version of SharePoint 2007. I don't believe it has the option for SharePoint Task lists. That's how old it is.

In SPO, I'm thinking we will need to use the "Alert Me" feature in order for people to have a task alert emailed to them, but that would require us to to go in and set up alerts for everyone that will ever get a task, and they would then get alerts for items that are not assigned to them (spammed). We want to be able to designate an individual task to an individual--not alert them every time a new task is created, modified, etc.

WSS 3 is an oldie.  I don't know too many people on that now!

I'm thinking that a Power Automate Flow might be an idea. Without wishing to get too evangelical about the product, it's a part of the O365 suite and if you've any experience with SharePoint Designer will be somewhat familiar.  The one key difference is that Power Automate can connect to a whole range of products far beyond the SharePoint ecosystem.

If your kick-off event for a colleague being notified of a task assignment is consistent, then this can be built within Power Automate pretty swiftly. Automating these sort of things is a strength of the product.  You could set it to fire whenever a new list item is added to be emailed to the individual.  There are some template flows available to consult but let me know if you'd like any more detail.

That's interesting--thanks. Do you happen to know what the default method for assigning a task item to an individual is for SP tasks lists?

I'm going from memory here but let's see where we go.  Firstly in the list settings make sure that Advanced Settings --> Email Notification is turned on.  When this has been activated any name that's provided to the Assigned To column should receive the email alert.  This should work we creating a new List Item but sadly I can't recall if it fires for page edits.

I'm realllly hoping that's of some use for you!

I'm not seeing an Assigned To column. Do you have a screenshot you can share?

I don't have access to a WSS instance anymore I'm afraid but if you check the site settings and look under the list columns listing can you post a screenshot of that? One of those columns should correspond to a people picker, which I think would be a good candidate.
0 Likes
Reply

I'm talking about SPO. I don't see an Assigned To there. That's what I was hoping you could send a screenshot of.

It's not looking like there is a straightforward way to assign a task to someone without using the alert me feature, or sharing the task item. Is that your understanding?

Right, I owe you an apology as I think I've been barking up the wrong tree somewhat.  I've just set up a task list called "Test List" on SPO with the image below and the assigned to column doesn't trigger a thing.  I've not tested this within SPO before and assumed it was the same.  So, apologies for that, I was in the wrong. 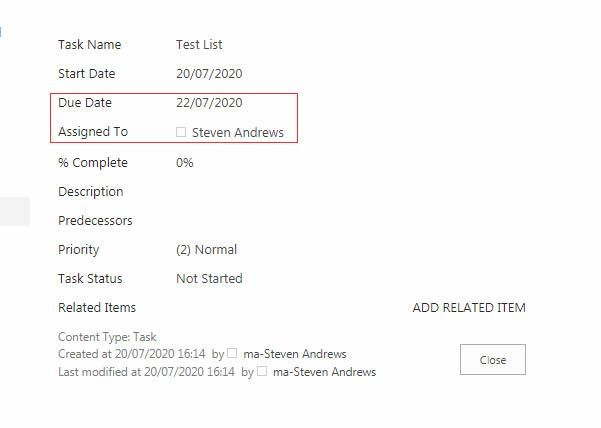 Having filled this out it didn't trigger any email as I was expecting it to have done.  It's possible that some of the older SharePoint specific functionalities have been removed (like SPD workflows) and I've missed this one.

Your opening post does mention that you'd like to avoid a workflow but I think the investment would be worth it.  There are a few templates in PowerAutomate that can be customised fairly quickly to achieve what you might be after.