We are facing a typical problem with one of the forms since last one week. We have opened a ticket as well, but no resolution even after 1 week. The only response I am getting from support is, "we are looking at it"!

Before you ask, please note that the form having problem (and other forms which are working), have been created directly on forms.office.com. They have NOT been created through OneDrive via Create New Excel Survey.

This peculiar problem manifests itself when viewing responses. The "Open in Excel" button shows a small cloud icon overlay on the Excel icon, which says that something is wrong somewhere:

Once we click on that button, a new window/tab opens up showing a loading indicator for "opening in OneDrive"! Notice how the new page is called "RedirectToExcelPage.aspx"! 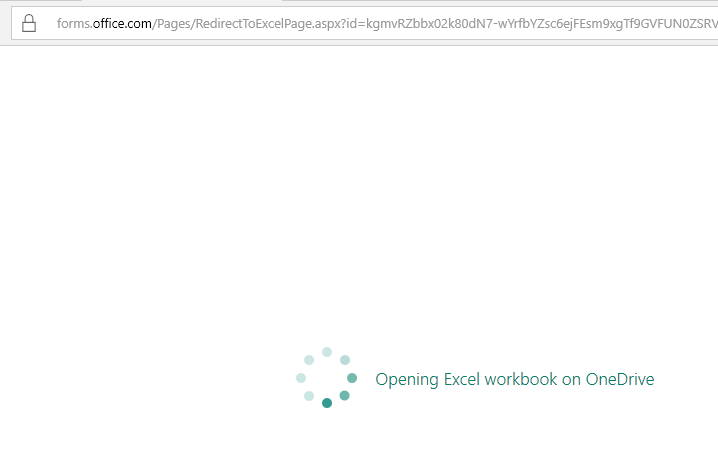 After a few seconds, it throws up an error saying,  "Cannot open Excel workbook
The Excel workbook cannot be found. Please check if the workbook is deleted"!

I am wondering why does it insist on opening the Excel file from OneDrive, when clearly the form is not created from OneDrive via "Excel Surveys". On other forms, it is just working fine.

This is how it looks on other forms (and how it should actually look like) without the cloud icon overlay:

And this is how it opens up Excel inline (and downloads and opens file-save dialog) on the same tab/page itself:

On other forms, it opens inline on the same tab/page

I don't get it how half-baked things are being spewed out by Microsoft in recent times? It becomes very embarassing when I encourage my users to start using O365 products and services instead of third-party products like SurveyMonkey which my users are comfortable with. When such issues happen, my users retort back blaming me, and go back to third-party services in hordes. This is not the first such embarassment I have had. Groups, Teams, Planner all have given me such headaches. Groups being the worst.

Has anyone of you encountered this problem?

Hi @Abhimanyu Singh, i have reported your problem to the engineering team.

Thank you @Qingwen Zeng for responding. Please note the link to that form: https://forms.office.com/Pages/DesignPage.aspx?fragment=FormId%3DkgmvRZbbx02k80dN7-wYrfbYZsc6ejFEsm9...

Yes this is very weird. As I said, I already opened a support ticket, but until now they haven't been able to do anything. The ticket Id is SRX1400328584ID.

I told them that if they need more time, then at least give an extract of raw data from the unerdlying database, so that I can get on with business. But even this is not happening and I am getting a flak every passing day!

From our service logs, I found that your form was truly created from Excel. I can see the excel file info
{
WorkbookId: "drives/b!QB_j3D3OCkaltV6FsXy_73P0zVPS60tCkV9ozfDI4M-PV311TEftQJ78NF5wGyIo/items/01N6DO3N...",
Origin: "Excel",
Title: "Book1"
}
So I guess you might forget the creation entry of the form. And then the excel file "Book1" might be considered as a useless file and be deleted.
You can reexport your data to a new excel file by the steps:
1. click the button "Open in Excel", it will open a page tab.
2. copy the url of the new page, it looks like:  https://forms.office.com/Pages/RedirectToExcelPage.aspx?id=v4j5cvGGr0GRqy180ZNV4u&forceReExport=false
3. change the "false" to "true" in the end of the url, like:
https://forms.office.com/Pages/RedirectToExcelPage.aspx?id=v4j5cvGGr0GRqy180ZN4u&forceReExport=true
4. open the new url in browser then you will see all the data in a new excel file.

Thanks a lot @Qingwen Zeng for your efforts.

1. I talked to the user who created this form, and she is sure about the process she took to create it. In fact, when I gave the training I never talked about Excel Survey via OneDrive. I only showed them how to login to forms.office.com and create forms there. During the support ticket calls, I asked her to show me how did she create the form step-by-step. And this dummy form did not have problems, but the process was the same. So, it definitely is weird. (Two entry points to the same service is anyways confusing and redundant, but that is another story and rant for another day.)

2. I tried the method you suggested of turning the "forceReExport" querystring to "true". But this also does not work, and throws another error:

Error when forceReExport is set to true

Thank you @Qingwen Zeng for all your support. Much appreciated. I could get the export done with your help. Marked it as closed.

We are experiencing the same issue and updating the URL from "False" to "True" did not work for us.  Was there something different that you did in order to get this to work?

Are you the form owner?

And could you share the form url to me?

Thanks for the quick response!  Here is the link to the form https://forms.office.com/Pages/ResponsePage.aspx?id=Bivvv1bSjk-9A402h5hwY8jvYnBAiBZMkaODyhv0pJRUQUI5...

We don't have external sharing enabled at this time so if that poses a problem in your investigation, please let me know

Hi @Deleted, the URL only works for the actual form owner.

Could you check if the URL works for the owner.

Thanks @Zhongzhong Li It does not work for the owner.

: Please the owner try the steps

1. click the button "Open in Excel", it will open a page tab.

2. copy the url of the new page, it looks like: https://forms.office.com/Pages/RedirectToExcelPage.aspx?id=v4j5cvGGr0GRqy180ZNV4u&forceReExport=false

3. change the "false" to "true" in the end of the url, like: https://forms.office.com/Pages/RedirectToExcelPage.aspx?id=v4j5cvGGr0GRqy180ZN4u&forceReExport=true

4. open the new url in browser then you will see all the data in a new excel file.

The owner gets the following error after following the steps you outlined.

Do you have any thoughts on the error I sent you?

@Qingwen ZengHi! I am having the exact same problem. My link is https://forms.office.com/Pages/ResponsePage.aspx?id=NXF4KzrKbEi9CvYBX785uPg9cfHcN6tItC8ux92Zgg5UMDVV...

what can I do?

After downloading and (re)installing Internet Explorer and opening it there, the file actually opened in SharePoint.

I had a similar issue, and entered a test entry into my form, and found that even though when I clicked Open in Excel and got the "Excel workbook is missing" fail, that a new workbook (numbered 1) stored same place in my OneDrive with all of the responses thus far (including my test one) was there. It looks like Microsoft fixed the issue as long as you can get to the owner's file storage.
0 Likes
Reply

Moving form to Group form, can't sync all responses to a new workbook