Hi!  Is it possible to edit a response once submitted?  I need to add more detail (contact details) on the form which has been submitted.  Tried to do in Excel but it wont update the fields in the response.

HI Liz @Liz_F, no you can't edit the response directly, but what you can do - and we do this a lot in my company - is to use Flow to save the response to a SharePoint list which, as well as having the columns for the answers in the response, can have a lot of other columns as well which you can then edit and save.  A simple example is below (and assumes responses will be coming from outside the organisation, hence the request for the email address. Otherwise you could grab the responder's details directly via an Office 365 Users action in Flow).

Hope that helps. Come back with any questions about this. 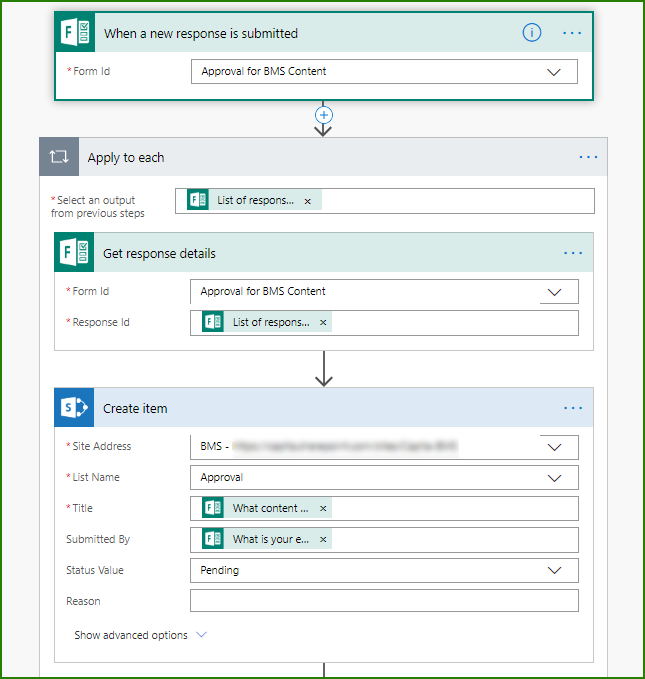 If I wanna add in the flow as below:

When submitted a new form

the newly submitted form will send an email for approval

If approved, the form is no issue, but if not approved I wanna the respondent to edit and resubmit again.

@Vincent87 as I said in my previous post, it is not currently possible to edit a response after it has been submitted. There is a UserVoice request for this which you can vote for at https://microsoftforms.uservoice.com/forums/386451-welcome-to-microsoft-forms-suggestion-box/suggest...

Other than that you would need to use a flow to save the response to SharePoint and start the approval. If the outcome was Reject then an email would be sent by the flow to the responder with a link to the SharePoint item asking them to edit their response. You'd need a column in your list for Status which would be initially Pending, would then be set to Approve or to Resubmit depending on the outcome.

When the user edited their response in the SharePoint list they would need to set the Status to Resubmitted.

You would then need a second flow that would trigger when an item was created or modified and would have a trigger condition of
@equals(triggerBody()?['Status'],'Resubmitted') so it would only fire if the list item had a status of Resubmitted and would send the approval to the approver and update the Status column etc..

So it's moderately complex if you're not used to flows in Power Automate. But come back with any questions or problems.

@RobElliottThanks! I am totally going to use your suggestion!  So happy that sharepoint can handle way more files now than back in the only 5000 items. :)

Having read only access to a group form in Forms

Submitting Information for Multiple Activities in MS Forms in One Submission? [Table feature?]