I have tried typing it in several ways and even did the 'import list from cells' which did not work.

I don't know what custom sort list you are referring to and why it wouldn't work. But I would expect that it will sort based on TEXT value so if you mean that the sort comes out in 'crazy' looking order then yes that makes sense because $1 ... comes before $2.... regardless if that is $2,000,000 or $250,000
0 Likes
Reply

It is my understanding that the whole point of a custom list is to work around those limitations. I can do it easily if I want the order to be non-alphabetical (Sign, Preprint, Remove). Should not this list follow the same logic? I am putting it in this specific order, therefore, it should sort in this order. Thoughts?

EDIT:  BTW you can use other characters instead.  So for example I replaced all the "," with CHAR(130) which looks identical to "," but is obviously a different ascii character and could use the custom sort: 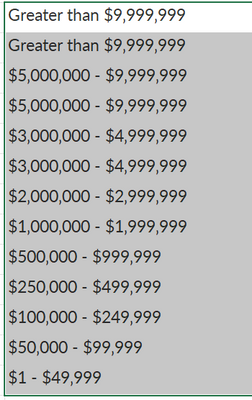 but of course you then have an issue trying to type that in.

ALSO please note that sorting of a custom list will ONLY apply to items that exactly MATCH that list so values 'inside those ranges' will not match items in the custom list and will NOT sort based on that custom sort list.