Is anything wrong with my computer?

How can I fix it?

What do you see if you open the attached workbook?

I do not have the same Excel versions, but FWIW, I can see the same difference between the R^2 calculated with LINEST and the chart trendline.

See the image below.  Also see the Excel file; but caveat: you might get different results if the file is recalculated when you open it in another version of Excel.

I cannot offer a dispositive explanation at this time.

But the wikipage (click here) explains that there ``are several definitions of R2 that are only sometimes equivalent``.  One such difference is the calculation of the "correlation coefficient" (r) v. "coefficient of determination" (R).

However, IMHO, the wikipage is "confusing" (read: dubious). I would need more time to vet the information and to test its applicability to the difference that we see. 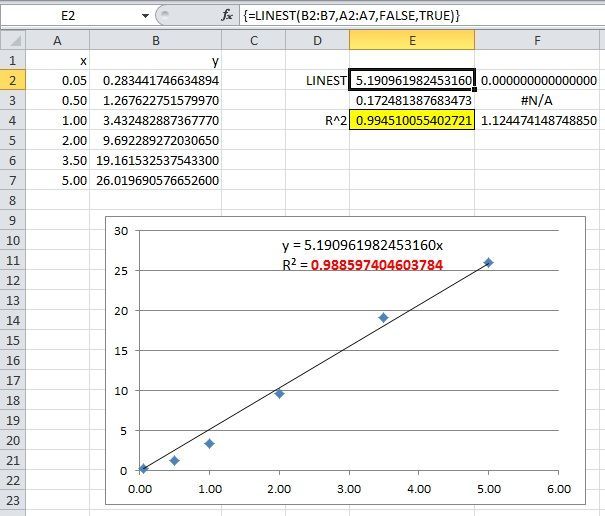 Wow cool.
So how can I change the trendline to use LINEST result in my excel?
0 Likes
Reply

We cannot.  All I can offer is a difficult work-around, that might not be satisfactory.

You can calculate the LINEST R^2 with the following formula (normally-entered), if you wish:

Tying up loose ends for posterity....

That is, indeed, the reason for the difference, to a degree.

But LINEST R^2 and the linear trendline R^2 are based on the coefficient of determination (CoD).

When "zero intercept" is not specified -- that is, when there is a non-zero intercept -- all 3 statistics are the same, within the limits of floating-point arithmetic.

But when "zero intercept" is specified -- that is, when there is no intercept -- CoD differs from the Excel RSQ.

And more to the point, there is some debate among statisticians about how to calculate the CoD when a zero intercept is specified.

First, note that LINEST R^2 and the linear trendline R^2 are __not__ the square of any number, whereas Excel RSQ is. "R^2" is simply the notation that statisticians use for the CoD. I will use the term "CoD" (duh!) to avoid confusion.

The distinction is significant because the general method of calculating the CoD can result in __negative__ values for "R^2", whereas Excel RSQ is always non-negative.

Nevertheless, some statiscians justify the alternative method of calculating the CoD, in part, in order to avoid the negative CoD.

The method of calculating Excel RSQ is described in the RSQ help page (click here).

That formula is also used to calculate LINEST R^2 when "zero intercept" is not specified (const = TRUE).

An explanation of that formula can be found in an academic article (click here), which is a heavy read (i.e. TMI).

However, I am told that in Office 365 Excel, the calculation of the linear trendline R^2 has been changed to agree with LINEST R^2 when "zero intercept" is specified.

So for Office 365 users, the two values of "R^2" (CoD) should be the same, within the limits of floating-point arithmetic.

From the "coefficient of determination" wikipage.... 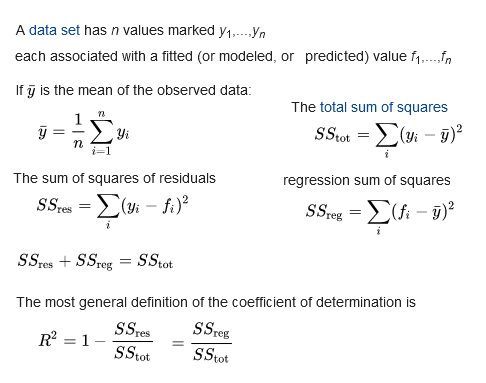 From the LINEST help page ....

Now I understand why they are different and find the way to figure it out.

You totally answered my questions and solved my problems.