How do I get an exponential regression that minimizes R^2?

How do I get an exponential regression that minimizes R^2?

Consider the following data, generated by the Python script 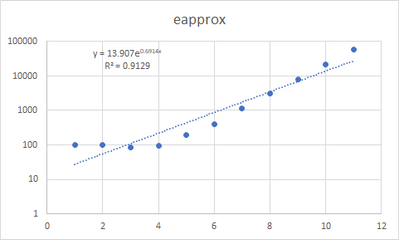 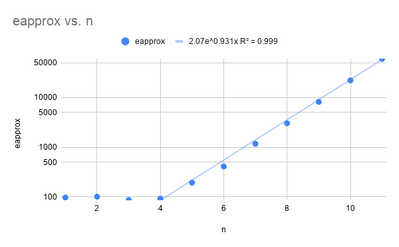 Clearly the Excel trendline fails to minimize R^2, presumably because Excel is assuming that a linear regression with unit weights on x, log(y) is the same as an exponential regression with unit weights on x, y (it's not; you need to log-scale the weights/errors as well).  How do I correct this issue, and get Excel to give me the actually correct trendline?

Re: How do I get an exponential regression that minimizes R^2?

Please try with this setting

Re: How do I get an exponential regression that minimizes R^2?

I must be brief. I might add an image and attach an Excel file later.  And I might add a more-explanatory response later.  But in a nutshell....

Obviously, we want to maximize, not minimize R^2.

So you can mimic the Google chart by entering an intercept value (b) that rounds to 2.207.

Ignore the R^2 that appears in the chart.  It is calculated differently than either LINEST or RSQ below, which seems to be how it is calculated for the Google image.

Caveat:  You might get slightly different results when you use the exact given y-values.  I must use the y-values as you posted them, which might be rounded due to the cell format.

In Excel, the slope (m) can be calculated with the following normally-entered formula (press Enter as usual) in I11:

R^2 can be calculated with the following normally-entered formula:

where I11 contains the LINEST formula above.  That displays 0.999 (rounded), like Google.

But IMHO, that is not the best "trend" formula to use.  Again, perhaps I'll post more later.