Please advise am I miss anything.

It looks okay for me 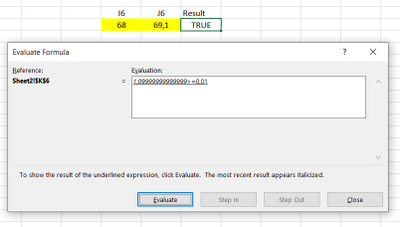 But I guess it is not the case.

And attach __two__ files, one for Office 365 and one for Excel 2013, that demonstrate when the formula has different results for the "same" data.

Ostensibly, 69.1 - 68 is too large a difference for the comparison with 0.01 to be FALSE, even if we assume that J6 and I6 are not exactly the values that they appear to be.

@Juliano-Petrukio  wrote: ``One likelihood can be the Floating Point Precision "Error" caused by IEEE 754 Standard. But I guess it is not the case.``

That is still a valid issue.  And the work-around is:

The problem is with the (binary) subtraction.  It has nothing to do with ABS.

Thanks for all of the replies.

This is the point which I don't get it. 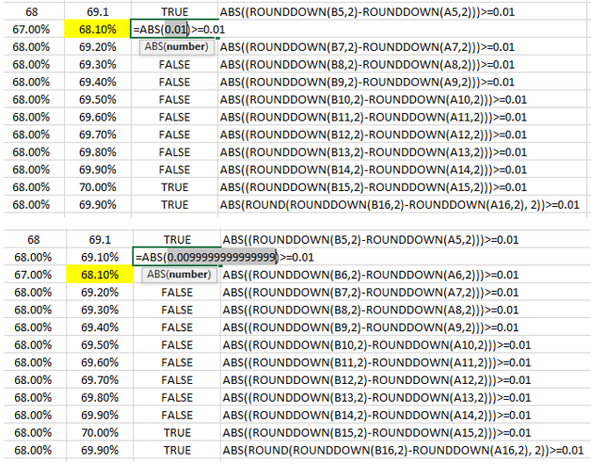 I do not see any comparison of Office 365 Excel and Excel 2013 results.  So I assume that you realize now that they return the same results for exactly the same data.  The operative word is "exactly".

@Juliano-Petrukio already pointed you to a MSFT explanation, albeit unnecessarily complex and inaccurate, IMHO.   And as I noted previously, the problem has nothing to do with ABS.

More importantly, I already demonstrated the work-around, to wit:

The simpler explanation (IMHO) is....

Excel complicates our ability to understand the problem because it arbitrarily limits the number of digits that it displays to up to 15 significant digits (rounded).  Consequently, there might be infinitesimal "residuals" that we cannot see by formatting.

In general, the work-around is.... When we expect a calculation that involves or results in a number with a decimal fraction to be accurate to some number of decimal places, we should explicitly round to that number of decimal places (and not to an arbitrary number like 10), even if the individual numbers appear to be rounded appropriately.

See columns D:H in the "sheet1 corrected" worksheet in the attached file.

LMK if you have further questions.

As mentioned on my previous post you can do the following 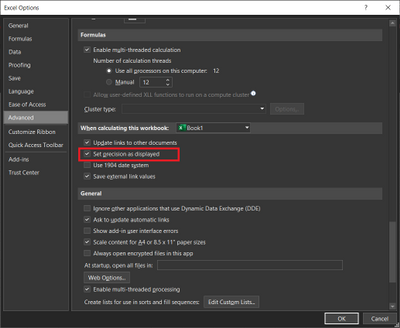 That is strongly ill-advised, IMHO.

First, setting PAD does not fix @SomTony's problem because PAD applies only to the final cell value, not to values of intermediate expressions.

Second, IMHO, it is ill-advised to set PAD without saving a copy of the file before setting PAD.

The reason is:  merely setting PAD might irrevocably change constants that are purposely formatted with less precision (e.g. interest rates); and such changes can affect the entire workbook.  Thus, if we decide later to deselect PAD, the "damage" might have been done already.

Fortunately, Excel gives us some warning of that side-effect when we set PAD.  Pay attention to it.

We know about it. That's why a comprehensive and technical explanation was given on previous article. Excel has some hidden features like that for a reason. Was achieved the reason and the why. The warning is given before the user moves forward.
There are situations that such feature is required , or other situations to handle with iterations and circular references ....

But thank you for your concerns. Its important we share different experiences on the same technical problem.

Inconsistency error in the MROUND function

Number to word convertion in excel 2016