Turn on suggestions
Auto-suggest helps you quickly narrow down your search results by suggesting possible matches as you type.
Showing results for
Show  only  | Search instead for
Did you mean:
Conditional Number Formatting
By

Liam has provided financial modelling services and training to clients for more than two decades. A senior accountant and professional mathematician, he has worked in numerous countries with many internationally recognised clients, providing and reviewing strategic and operational models for various key business assignments.

Given that one of the primary purposes of a spreadsheet is to present numerical data, it is important how such information is presented. Cells may be individually formatted in many, many ways: 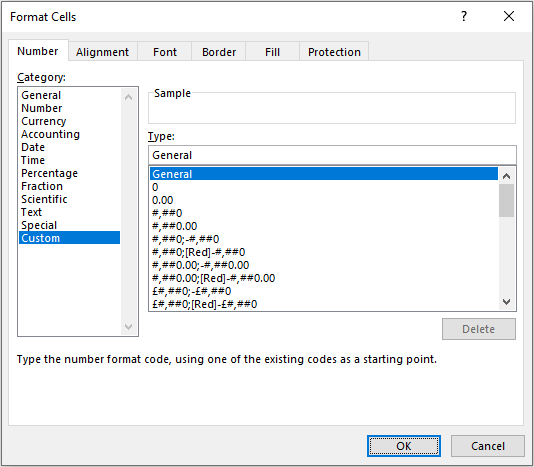 Excel has many built-in number formats that are relatively easy to understand, e.g. Currency, Date, Percentage. The default format is ‘General’ where Excel will endeavour to provide the most appropriate format for the contents. For example, typing ‘3 3/4’ into a cell will result in Excel selecting a mixed format.

But what do you do if you can’t find an appropriate format?

Selecting the ‘Custom’ category in the Number tab of the Formal Cells dialog box activates the ‘Type:’ input box, where a new format can be defined. Excel allows between 200 and 250 custom number formats in a particular workbook, depending upon the language version of the product that has been installed.

The ‘Type’ input box allows up to four aspects of formatting to be specified in a cell. These aspects are referred to as sections and are separated by a semi-colon (;). To ascertain what is contained in each section depends on the total number of sections used, viz.

To the uninitiated, coding custom number formats may appear incomprehensible. However, understanding the following soon puts things into perspective: 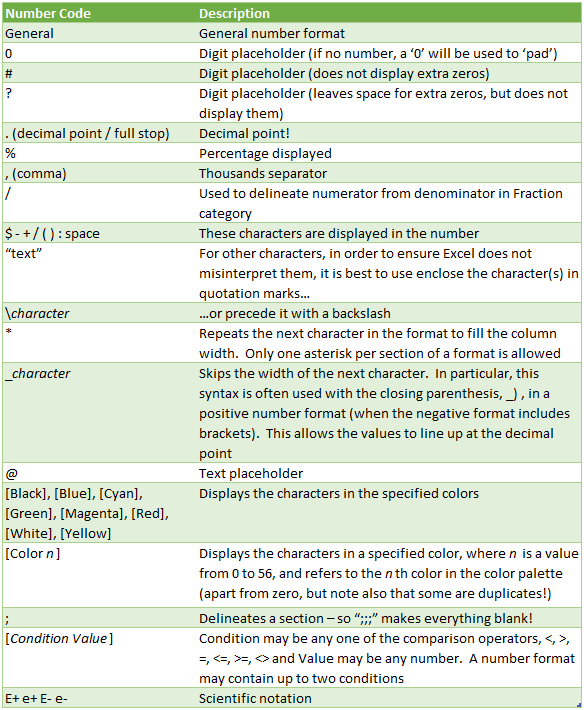 This format has all four sections, so the first section, [Blue]$* _(#,##0.0,_0_), specifies the formatting for positive numbers. In this case, positive numbers will be formatted blue and be preceded with a $ sign. Note the use of the asterisk followed by a space: this means that the cell width will be ‘padded out’ with spaces so that the dollar sign will be pushed to the very left of the cell and the number formatting will be to the very right. _( is not necessary, strictly speaking, but ensures there is space made for an open bracket, even though there is no such character shown. #,##0.0, ensures positive numbers contain thousand separators (where needed) and displays the number to the nearest 0.1 of a thousand. Two commas at the end would have the number displayed to the nearest 0.1 of a million, and so on. Finally, the _0_) requires Excel to maintain enough space at the right end of a cell for a digit (not necessarily zero and a close bracket). It should be noted that a separate underscore is required for each character that is to be allowed for.

The second section, [Red]$* (#,##0.00,), specifies the formatting for negative numbers. It is similar to the first section, but colors the number red, reports numbers to 0.01 of a thousand and encloses it in brackets.

The third section, [Color 7]\-_._0_0_), specifies the formatting for zero values. This colors zero values “Color 7” which is a delightful pink in Excel’s standard color palette. I am a great believer in using a dash, generated by using \- here, to denote zero as it distinguishes a zero value from something that is approximately zero, which can be useful for error checking, etc. The final four underscored characters, _._0_0_), ensure that the dash will line up with the units value of a positive or negative value.

Finally, the fourth section, [Cyan]@*.”is text”, defines how text is to be formatted. If omitted, text is simply formatted ‘generally’, but here it will be colored cyan. The @ symbol specifies the relative location of the text within the cell (left-hand side of the cell), the *. will ‘fill’ the cell with period characters and “is text” will add these words to the end of the text, right-aligned (note no ‘&’ concatenation is required since these words appear in the formatting only).

There’s another way it can be used though: 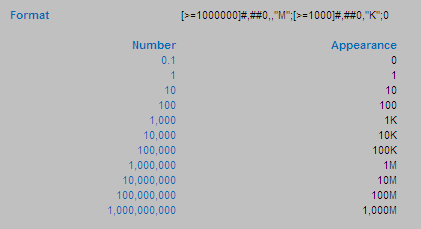 The conditions are included in square brackets such that if the condition is true, the following formatting will be applied.

In this example, there are only three sections, so text will be formatted ‘generally’. The first section, [>=1000000]#,##0,,"M", will format all numbers greater than or equal to a million to the nearest million and add an “M” to the end of the number.

The second section will only be considered if the first condition is not true, so the order of the two ‘conditional formats’ needs to be thought through. Here, the second section, [>=1000]#,##0,"K", will format all numbers greater than or equal to a thousand (but necessarily less than a million) to the nearest thousand and add a “K” to the end of the number.

The third and final section, 0, will format all other numbers (every value less than 1,000) to the nearest integer without thousands separator(s). Pretty cool, eh?

So far so good, but this could have all been gleaned elsewhere. Let’s turn this idea up to 11. Imagine you wanted to format a cell so that the following values would appear as follows: 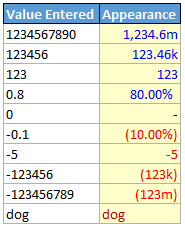 The issue here is how to create the correct formatting without using VBA code or Excel formulae in ONE cell so that if any of the above values in the left-hand column are entered into that cell they will appear as they are displayed in the right-hand column.

Conditional formatting was completely revamped and reinvented with the introduction of Excel 2007. You can now find it in the ‘Styles’ group of the ‘Home’ tab – or using the keyboard shortcut ALT + O + D:

I can use ‘New Rule…’ to exploit a loophole in the restrictive number of conditions custom number formatting appears to allow.

Using custom number formatting and conditional formatting combined the requirement is fairly straightforward. My suggested solution would be:

Here’s an illustration of that final formatting:

In this above illustration, I have selected conditional formatting to occur if the value in the cell is less than -1. Pressing the ‘Format…’ button then allows the user to select how the number formatting might appear.

Since many, many conditional formats may be applied to one cell in Excel, you can soon apply significantly more than four formats to any cell(s) in Excel.

Word to the Wise

Although I have explained you can circumvent the apparent limitations in number formatting using conditional formatting, applying too many unnecessary conditional formats can cause Excel to misbehave with cells not updating as intended and other cells (not formatted) changing as well.

Further, using lots of custom number formats in a single workbook uses considerable memory and can slow down the calculation time of an Excel file unnecessarily. Many of these formats are created accidentally. Each time a custom number format is edited, it will generate an additional listing for Custom Category Types. Any custom formats created inadvertently in this manner (that are not being used in the file) should be deleted; good housekeeping is essential.

@Liam Bastick is an Excel MVP, originally from the UK, but now based in Australia. He heads the global consulting / training firm SumProduct (sumproduct.com). You can contact him at liam.bastick@sumproduct.com.