Microsoft’s global series of data science hackathons made its second stop in the UK, at UCL last weekend. http://ucl.dsschack.com

Over 170 students from across the country joined us, despite TfL closures, at the Bloomsbury campus on Saturday, to take part in the 21-hour long challenge.

Students formed teams up to a maximum of 4 people to develop a data science solution against a dataset and challenge provided see http://aka.ms/ucldssc

The hackathon was themed around the development of innovative data science solutions with large financial data-sets in order to give Bloomberg a competitive advantage in the finance industry, while demonstrating use of Microsoft’s Cortana Intelligence Suite. Students had the opportunity to work on deep learning, text-mining and NLP to extract information from news articles in real-time. 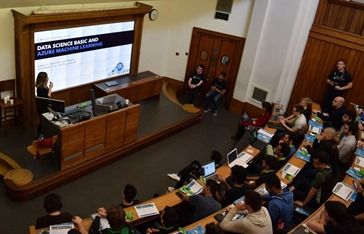 The challenges also focussed on the use of machine learning and classification of news articles for ranking and sentiment trend analysis, while demonstrating the impact of news and events on asset prices, as well as understanding the trends between various instruments in financial markets. 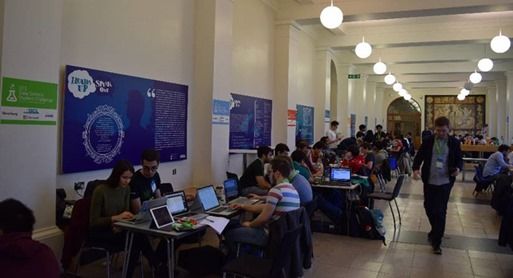 Teams were judged on their ability to identify significant relationships between instruments, news reports and trends, as well as illustrating the strength of those relationships. How that information could be used to enhance decision making, and identify generalised patterns of events were also important considerations.

The winning team, HypeTrain – Utku Ozbaluk, Alex Young and Lukas Weiss, Masters students in Data Science from the University of Southampton, came up with a forward indicator, which isn’t currently offered by Bloomberg, more information can be seen here . 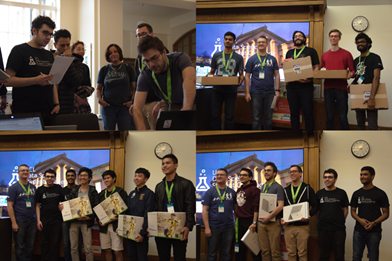 All the Hack entries are at http://www.github.com/DSSCHack2017

Thanks to the team 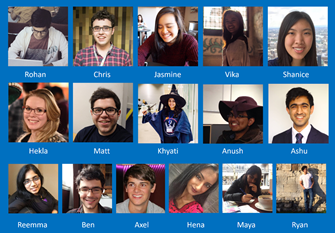 The team behind the hackathon

“As an employer of data scientists, I was overwhelmed by the solutions of many of the teams. The level of competence and creativity in the solutions that were presented back to me was fantastic. UCL is clearly fostering the academic benchmark for the next generation of data scientists. It was fantastic to see the depth of collaboration between different academic disciplines, from economists to statisticians to enhance the flavour of their solutions. Many of the students managed to grok some complicated Microsoft machine learning tools in a short space of time, showing the levels of agility necessary for real world data science careers”, said Richard Conway, http://www.Elastacloud.com

- 29% of attendees were from a non-CS background

- 38% of the attendees had never been to a hackathon before

- 90% of attendees were fairly well versed in programming

- The Facebook event page reached over 21k people and over 4k unique views in just a week https://www.facebook.com/dsschack