W10 is kinda dead. There are heaps of bugs. Task View is merely a shadow of its former self, you can't reorder virtual desktops and they haven't even moved any settings since 2018 or even 2017.
0 Likes
Reply

@pneenkoalabear wrote:
W10 is kinda dead. There are heaps of bugs. Task View is merely a shadow of its former self, you can't reorder virtual desktops and they haven't even moved any settings since 2018 or even 2017.

What are you talking about..this is insider fast ring, of course it has bugs.

I was referring to the production releases
0 Likes
Reply

Well this topic and forum is for insider only.
1 Like
Reply

I have multiple devices so I know what it's like.
0 Likes
Reply

Other than the weird task bar issue that you noticed and posted about already, it looks like the problem with the mouse cursor in 32 bit WPF apps hasn't been resolved yet. Here's hoping it gets fixed at some point soon.

I am not sure if this has anything to do with that VPN "issue" I posted about on the last update, but I noticed in the sign in box for the Windows VPN client, it no longer shows the domain name below the password box like it does in 1909 and previous builds of the fast ring: 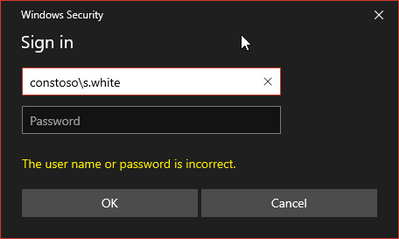 Even stranger, it allows me to log into my Meraki VPN without having to pass in the actual domain name.

As I stated previously, I'm able to work around this by just using the IP addresses. I also tried the fix that I used previously (changing the interface metric in the IpV4 settings for my ethernet adapter and the actual VPN connection's IPv4 settings) and that doesn't seem to work anymore.

[ADDED 4/2]We’re investigating reports that app icons in the taskbar are having rendering issues, including defaulting to the .exe icon.

[ADDED 4/2]We’re investigating reports that the battery icon on the lock screen always shows close to empty, regardless of actual battery levels.

[ADDED 4/2]We’re working on a fix for an issue causing webcams to not function correctly when attempting to make a video call in Microsoft Teams. The webcam should be unaffected when using Microsoft Teams via the browser.