Multiple organizations are seeing the same issue. This is still an issue.

Same problem. I've updated one PC and one Dell Notebook. Both with the problem only in the microphone. I had notice that if you enable the resource to hear your microphone (you listen yourself), LX-3000 works. But this is not an resolution. 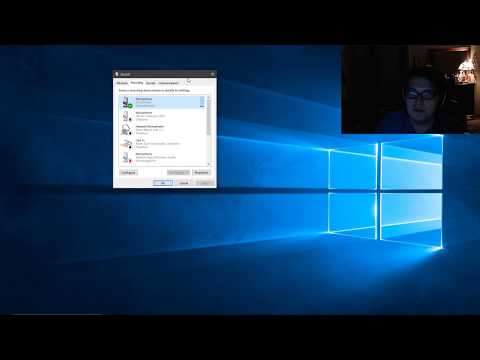 Windows 10 1803 Update Microphone & Webcam Not Working *FIX*
youtube.com/watch?v=O-Y6aL_aogU
So the most recent windows 10 update 1803 for alot of people messed up peoples webcams and microphones and prevented them from working in this video i show you how to fix that issue ►Affiliate With GreenManGaming Get Cheap Games Here: ...
1 Like
Reply

I experienced the same problem after Windows 10 update.  I am on a Lenovo workstation.  Trying to use the Lifechat LX-3000 to record voiceover on Techsmith Snagit 18.  Techsmith advised that I upgrade to Snagit 19, which I did, but the issue was not resolved.  I was told that the driver needed to be updated but there is no driver available for this unit for Windows 10.

I happened upon this fix for myself purely by accident.

I decided to find out which programs were affected by this lack of audio.  I have Camtasia 2018 and tried a screen recording and noticed that the audio was turned way down, so I adjusted it back up to 100%.  I did a recording and everything was recording properly.

I went back to Snagit 19 and tried a screen capture recording and the audio was also miraculously fixed.

I also use this same headset for Dragon Naturally Speaking (version 13).  When I used the Dragon program, the audio for the other programs (Camtasia and Snagit) reverted back to no audio.  Again, I went back into Camtasia to readjust the audio input levels and it was fixed.

I am not a tech person so I don't know why it worked or even how it worked... but it is working.  Not the most elegant fix but at least, the headset is working in a roundabout way.

It appears to have some conflict with other programs that uses the headset.  I am not experiencing any issues with GChat or Skype (as yet).

I purchased the LifeChat LX-3000 and my laptop wasn't picking up the microphone. I was able to fix it by going to Control Panel>Hardware and Sound>Sound>Manage audio devices>Recording>Configure

After configuring, you can go to Settings>Sound>Input>Test your microphone and it should be working!