Turn on suggestions
Auto-suggest helps you quickly narrow down your search results by suggesting possible matches as you type.
Showing results for
Show  only  | Search instead for
Did you mean:
SMB1 now disabled by default for Windows 11 Home Insiders builds
By

As you probably know, we began shipping Windows 10 and Windows Server with SMB1 not installed by default in RS3, the "Fall Creators Update" of 2017. Initially, we stopped installing the SMB1 server service in any editions of Windows and stopped installing the SMB1 client service in most editions of Windows. Home and Pro editions still had the client so users could connect to the vast fleet of consumer and small business third-party NAS devices that only supported SMB1. If the client didn't see any outbound use of SMB1 after total 15 days of uptime, it would then automatically uninstall it. In RS5 - version 1809 - we stopped installing SMB1 client in Pro editions.

And now the time has come to end the last remaining piece. If you install a Windows Insider Dev or Beta channel build in any variant of Home Edition, the SMB1 client isn't installed. 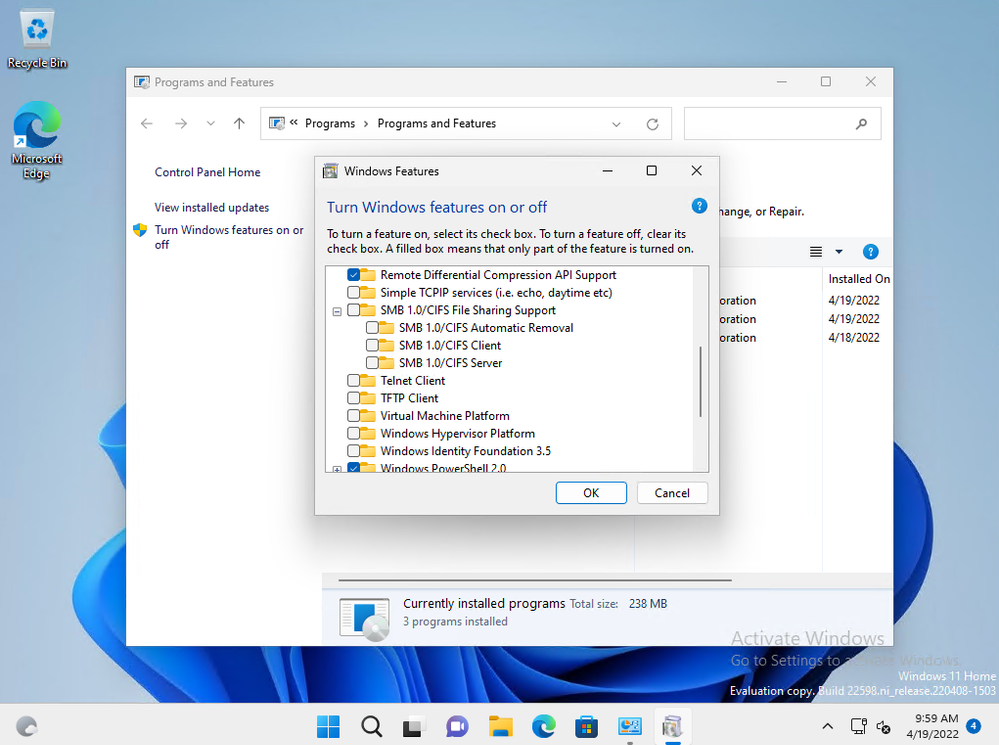 This means there is no edition of Windows 11 Insider that has any part of SMB1 enabled by default anymore. At the next major release of Windows 11, that will be the default behavior as well. Like always, this doesn't affect in-place upgrades of machines where you were already using SMB1. SMB1 is not gone here, an admin can still intentionally reinstall it.

This is not the final story, though: I am also announcing that we are going to remove the SMB1 binaries in a future release. Windows and Windows Server will no longer include the drivers and DLLs of SMB1. We will provide an out-of-band unsupported install package for organizations or users that still need SMB1 to connect to old factory machinery, medical gear, consumer NAS, etc. - I'll have more details on this in a few months.

I had to save this Home edition behavior for last, it's going to cause a consumer pain among folks who are still running very old equipment, a group that's the least likely to understand why their new Windows 11 laptop can't connect to their old networked hard drive. I'll spread this word throughout consumer channels as best I can - I hope you can help me with friends and family who rely on you for technical expertise.