Nothing else if filled out. Here is a picture of the sign ins through Azure AD showing the policy applying: 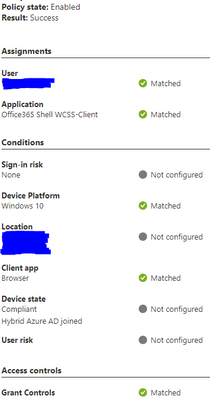 Anyone have any thoughts here? Or does anyone have a recommendation for another place where I might find an answer?

It's important to know which browser you are trying this from.
If you use Chrome you need the 'Windows 10 accounts' extension in order for the browser to pass on it's hybrid joined.

Have you checked the sign-in logs in order to verify what exactly is going wrong?

This is from Internet Explorer, the screenshot I included is from the Azure AD sign in logs. What else would you like to see?
0 Likes
Reply

Is it possible you didn't add the screenshot? Cant find it (might be because of mobile)
0 Likes
Reply

The first thing is that it's not possible for an Android or IOS device to be Azure AD Hybrid Joined. Am not 100% sure  about MacOS but I don't think it can be either.

So any rule that says Compliant or Azure AD Hybrid Joined should suffice. I'm assuming you are trying to block Windows devices that are Azure AD Joined but not Hybrid Joined from accessing the Office 365 Web Services?

When I run a whatif the rule is applied only when the specified user attempts to access the selected app from a Windows device. If the device is Azure AD Hybrid Joined it will be granted access otherwise it won't. Any other platform the policy is not applied

Is that somewhere close to what you were trying to achieve?