Planner: What does 'All plans' show?

MC182488 announced the change to All plans back in June 2019, and that going forward it would not be showing groups that did not already contain plans.  We have had a few support calls coming in where customers still aren't sure what changed here so I thought it was worth a little more explanation.

Before the change under All plans we would really show All groups.  This wasn't too obvious - because if you clicked on a group that didn't already have a plan we would then create one for you.  So it 'looked' like the group already had a plan.  Now in some cases that was fine - but we heard that many of these plans were not really needed - and with groups becoming used for more scenarios across Microsoft 365 this meant more chance of accidentally creating a plan where one wasn't needed.  To be clear, we never automatically created plans for new groups - you had to click on the group in All plans - but I can see how it may have looked like this based on the behavior described above.

All plans now just shows all plans - and you can also tell from the tile if the group probably contains multiple plans - as the plan name (bold) doesn't match the group name show below it.

You can of course create a new plan and choose and existing group to add it to - but we avoid the clutter and potential problems that showing all groups was causing. 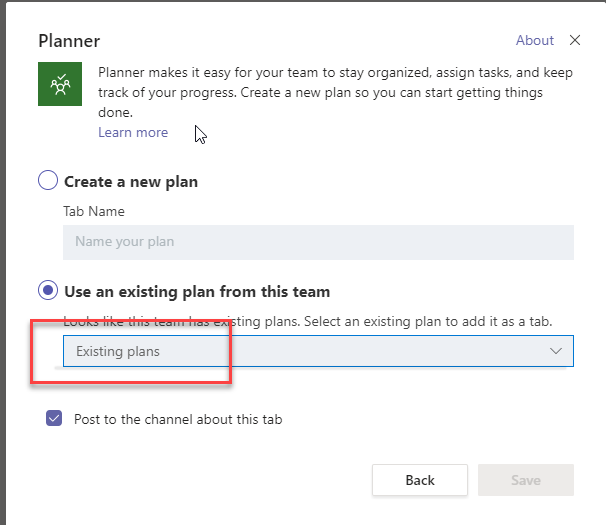 That is the point of the post @SusanMcClements - Teams or Group creation has never created any plan automatically.  The act of clicking on the Group, listed under All plans was actually creating the Plan.  Now you can just use the new plan option from the dialog you show.

Thanks for clarifying this Brian!

Thanks @Brian Smith for the clarification. That explains why I thought that a plan was created automatically when a Team is created.

But I'm still a bit confused. As you see in the screen clip below (sorry it's in Swedish) I created a Team with the name "A_a"

I open the Planner hub and I can't find the Group "A_a" under "All plans" any longer (but I did in June). But if i have no "Favotite plans" and no "Latest plans" I get a dropdown "More plans" and my Group/plan appears in that listing (se below). And if I try to click on it i get the message "This plan is missing or has been removed. Would you like to remove it from favorites and recent plans?" And if I try to remove it nothing happens 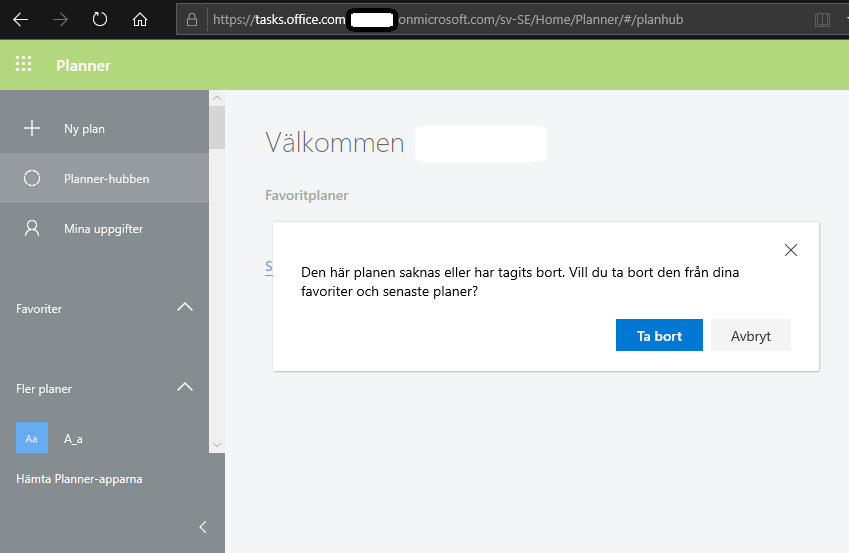 So from your description of the Changes you have done I guess that under "More plans" you are still listing Groups not actual plans.

Yes @muggdu in that scenario when there are no recent or favourites the More Plans does still show Groups.

I'm not sure if this is the right place for this so let me know if there's a better place to ask this question. I have multiple Plans setup under our Team. Using a channel named "Plan". I can see all the plans in one view but the information and charts are separated by the named Plans (All Plans?). How do I create a holistic view of all Tasks from all Plans? I need something to roll-up all the tasks so we can see potential conflicts between tasks.

Hi @peteroberts the main Planner community might get more eyes, but I can answer here too.  Unfortunately there isn't an "all up" view.  The closest you migth get is using the export to Excel from each plan and then consolidating to one Excel and reporting - but this would need repeating each time.  Worth sharing your scenario over at UserVoice - https://planner.uservoice.com/forums/330525-microsoft-planner-feedback-forum