I been testing adding folders as a team tab and these work fine.  Also, adding a library that contains document set's also works fine and the document sets seem to browse and operate as expected. 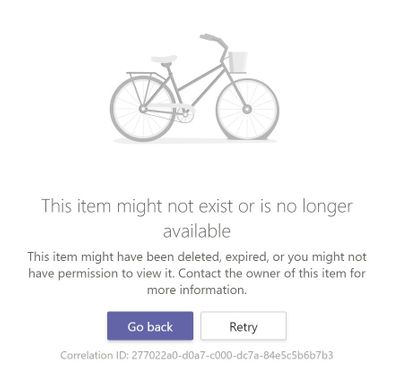 It's Ok I still don't understand how to do this just am learning and trying.

This is me in the above - I just don't understand the rules/requirements/what's being presented as it is.
0 Likes
Reply

I simply want to map the inside of a document set like you can with a standard folder in SharePoint in a TeamsTab.  Folders work, Document sets do not.  Pretty common that companies create documents sets for projects and would want to see a just the contents of a related document set rather than the entire library.

Are you attempting to do this by using Word? Outlook?
0 Likes
Reply

@JoanelleFryx_n-9th It also depends on if you are trying to do this and by which source of reference.

What style of writing and by what reason was it written for?   It's the same problem that Artists face distributing their work.  @yeolschool for example is a problem we want to address because the ways an artist wish their work be distributed, ways they want it credit for and how it's use should used of, ect.

There are several types of writing: APA, Bibliography, Chicago, MLA, but until we all can understand the terms we are wondering how to fix, we must stop and ask ourselves are we all on the same level of understanding.

I do not know how share points work.  As a Developer, that is an extremely problematic issue, if I were attempting to develop something and not "leak" information if it had something in it which contained rights of other I have yet to consult.

But, I know that I can trust that Microsoft would know that I know that they have seen and noticed my presence on line, in the Development department on Feedback, on everything I do on my computer, and because of my continued involvement (with no reason to keep trying to help Microsoft other than I simply want to help them) I know that they will correct issues because they listen to those who sit down and practice what they preach.

The same can be said that I know Elon Musk would be able to say that I am a geek and I do stand by sit down and practice what I preach because I got to a point where I saw him apologize.  A single tweet Sorry! and I was like oh shit something happened, back back back and then I saw a point where I unlinked a comment and then said Sorry! Now I'm not sure if I did it before or after him but I don't care.


Someone I look to for leadership skills did exactly online I didn't / wouldn't be aware of was displayed before me.  THAT is something I can't tell you how I know that I knew that but I saw it and made sure (at least between the tweets on Elon Musks and my involvement) I did not misdirect a quote.

I also did so on The Vote for the Rock Hall of fame.  I was tweeting to show a picture and it was shown up on his page.  I apologized for the picture (because it was unrelated to the page it was on) and then, told him I thanked him for Headlights.  That's the song I dedicated to my mom because I grew up in a very similar situation.

And because I LOVE Manson.  That was me in HS.  And Em had him on stage, looking awkward AF, and that's no disrespect to MANSON that's props to EM.  Because if MANSON can look AWKWARDS then SO THE F can I!

And "(lol) oh yeah @kayne Dude if it's you that's not MY face.   It's "Thanks for proving me wrong man I had NO idea Glad to be here my man."

There are ways to also do this by DropBox.
0 Likes
Reply

I absolutely love them!
0 Likes
Reply

This is also me. I am disabled in Ohio currently.
0 Likes
Reply

It to me this is OK. Because we're still working on it
0 Likes
Reply

It still does not work
0 Likes
Reply