Now in public preview: Cameo in PowerPoint Live in Teams

Now in public preview: Cameo in PowerPoint Live in Teams

With Cameo in PowerPoint Live, users will be able to integrate the presenter’s Teams camera feed into PowerPoint presentation and customize how and where they want to appear on slides.

Cameo supports all personalization properties like any other Office graphical object such as those offered by Pictures, Gifs and Shapes. This includes layering Cameo between content, adding motion effects such as morph, changing styles and shapes. 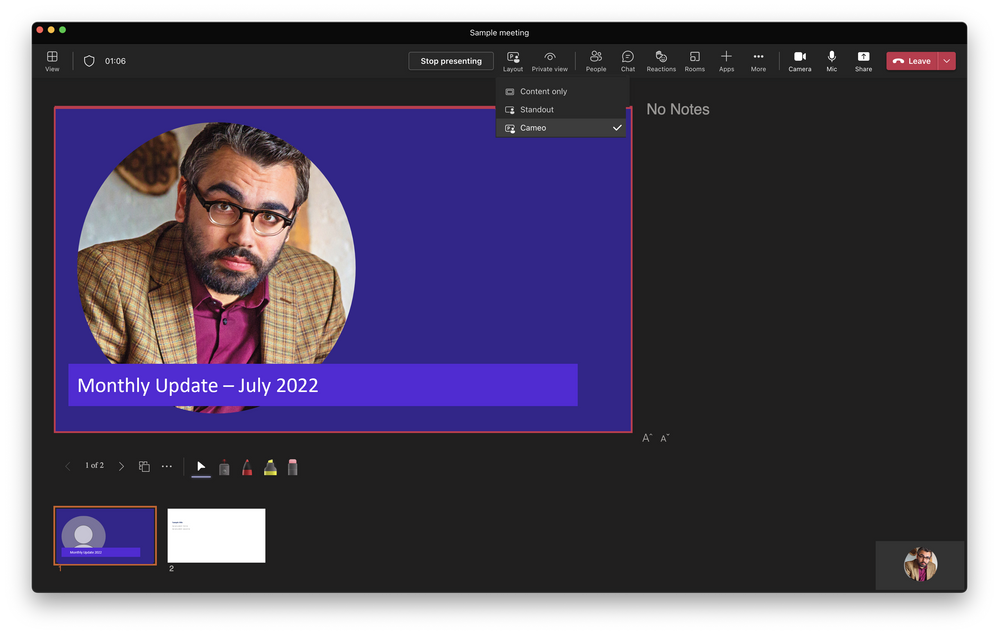 Available to everyone in Public Preview channel.

To present PowerPoint slides with a Cameo placeholder in Teams:

Note 2: To be able to use this feature, presenters and attendees need to be in Public Preview. To create Cameo objects, you need to use supported version of PowerPoint.

Cameo in PowerPoint Live will not be shown in the recording, web or mobile clients.

Got feedback on features in the public preview or other areas of Teams? Let us know straight from Teams via Help > Give feedback.  This is on the bottom left of the your client.

Re: Now in public preview: Cameo in PowerPoint Live in Teams

I know there is a limitation that cameo wont be shown in the recording, but if it were to be used in a lectures on Teams and record them, would the recording show the normal presentation and camera feed as separate? Or will record just the PPT Presentation?
0 Likes
Reply