Turn on suggestions
Auto-suggest helps you quickly narrow down your search results by suggesting possible matches as you type.
Showing results for
Show  only  | Search instead for
Did you mean:
Office What’s New Management Preview Updates Now Available
By

The Office What’s New management Preview allows your organization to decide which features are shown to or hidden from end users in the What’s New panel of Office desktop apps, and it gives you visibility into new content for each release version and channel, along with the capability to hide or show each feature’s What’s New content.

Admins will be able to see the What’s New content for the Semi-Annual update Channel, and pro-actively manage it using the Office What’s New management Preview. 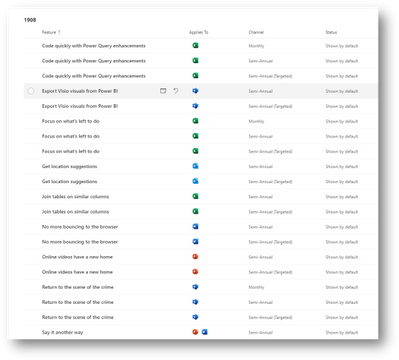 You won’t have to wait for the release day to get visibility into the feature content available for a coming release version. New features will begin appearing for a given channel based on the criteria in the following table:

We invite you to try the Preview today, and let us know what you think!  We’d love to hear about your experience with the Preview and these updates.