Last November at Microsoft Ignite, we announced new capabilities that put you in control of your users’ experience with the What’s New section of the Office desktop app Help pane. Last month, we announced support for the Office Apps admin role and the Semi-Annual Channel. Today, we are thrilled to announce that Office What's New management is now generally available!

The What’s New content in the Office desktop apps highlights an editorially curated list of new features being released for that application, with a short description, and often a picture or a video to help customers learn how to use the feature.​

Previously, Microsoft chose which features would be promoted in What’s New. Now, the choice is yours! The Office What’s New management allows you to decide which features are shown to or hidden from end users in the Office desktop app Help. It gives you visibility into new content for each release version and channel, along with the capability to hide or show each feature’s What’s New content. 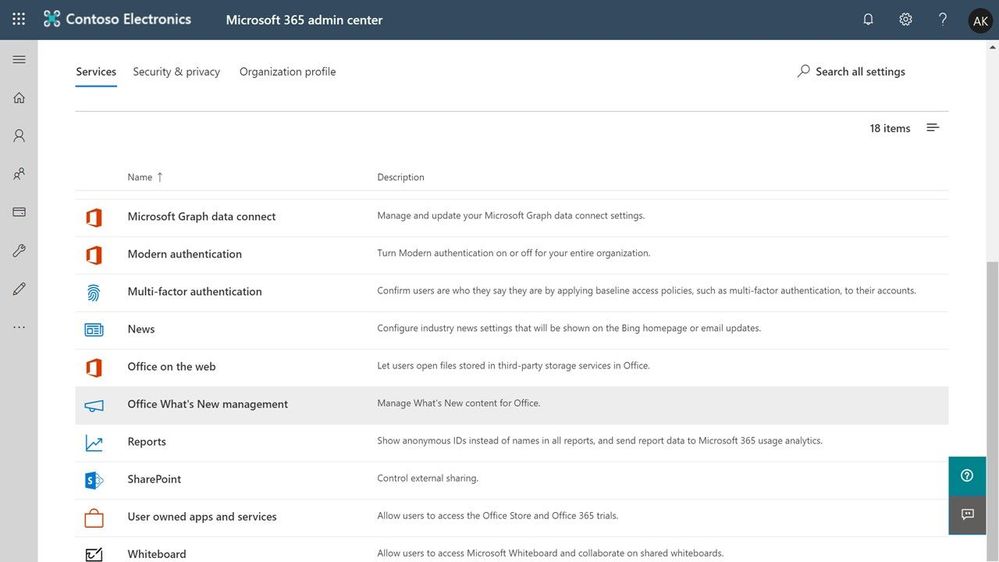 Office What's New management lists new Office features (grouped by build number) that are described in Office Help, along with the application(s) and channel containing the content, and the feature's visibility status.  You can filter the list of features by channel, application, and status (using single or multi-select) and across categories (for example, Monthly channel and PowerPoint and Excel). 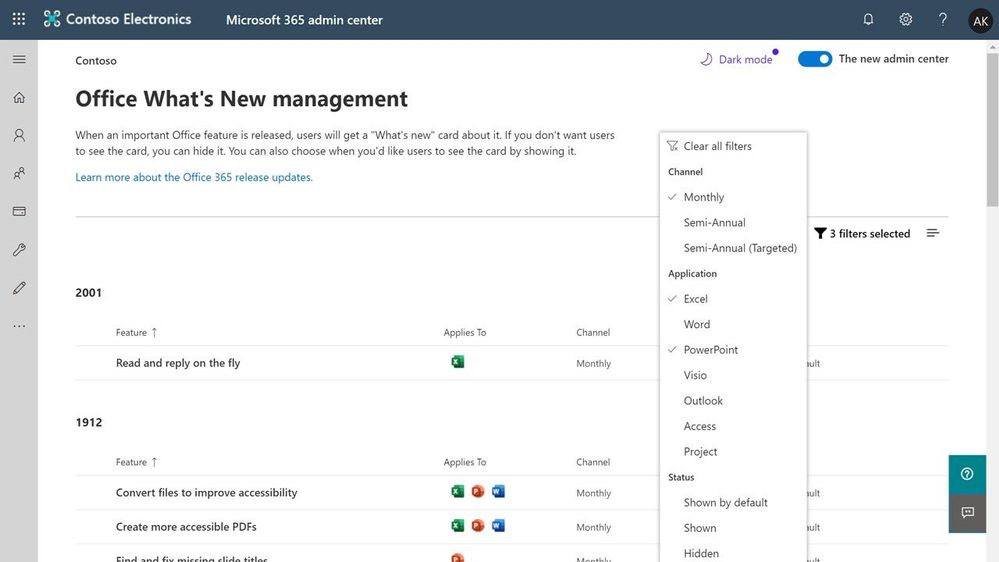 There are three possible values for Status:

You can use the Show and Hide buttons to change the status of an item. 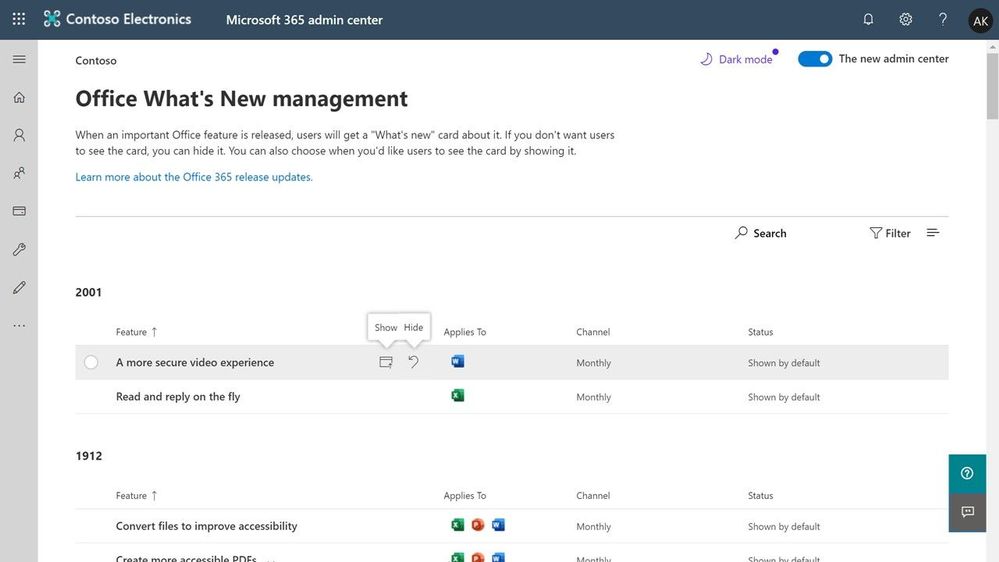 For example, if you click Show, it will change from Shown by default to Shown. This is useful when you want to record that you have reviewed the What’s New content and made a conscious decision to make it visible to your end-users. After you change an item to Show or Hide, the status will never revert back to Shown by default. Also note that hiding feature content that applies to multiple Office apps, turns it off for all apps.

Office What's New management can be used by Global admins and Office Apps admins, and by Global readers who can view, but not edit settings. 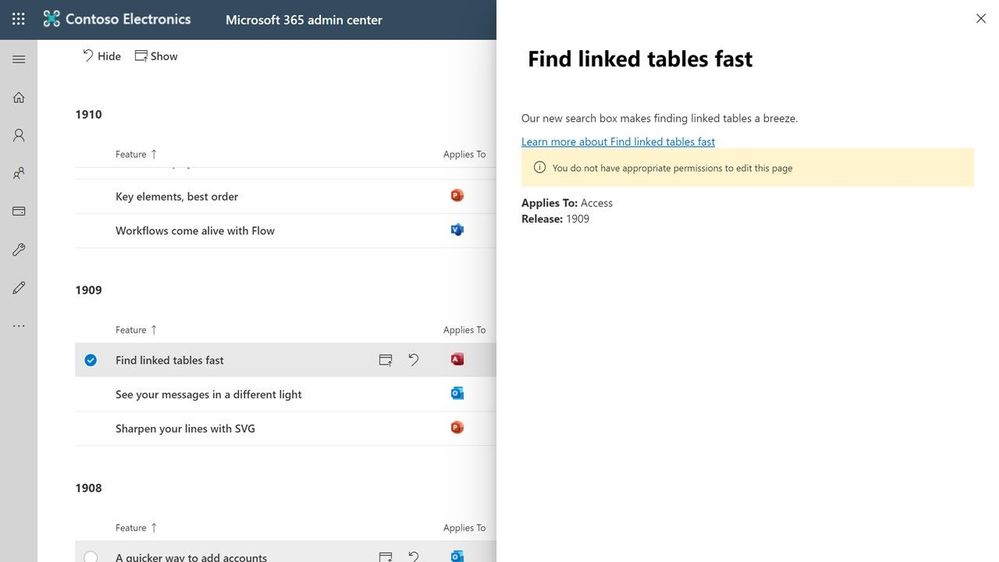 By the way, since announcing the updates to the Preview last month, we've also added support for Dark mode to the GA version. 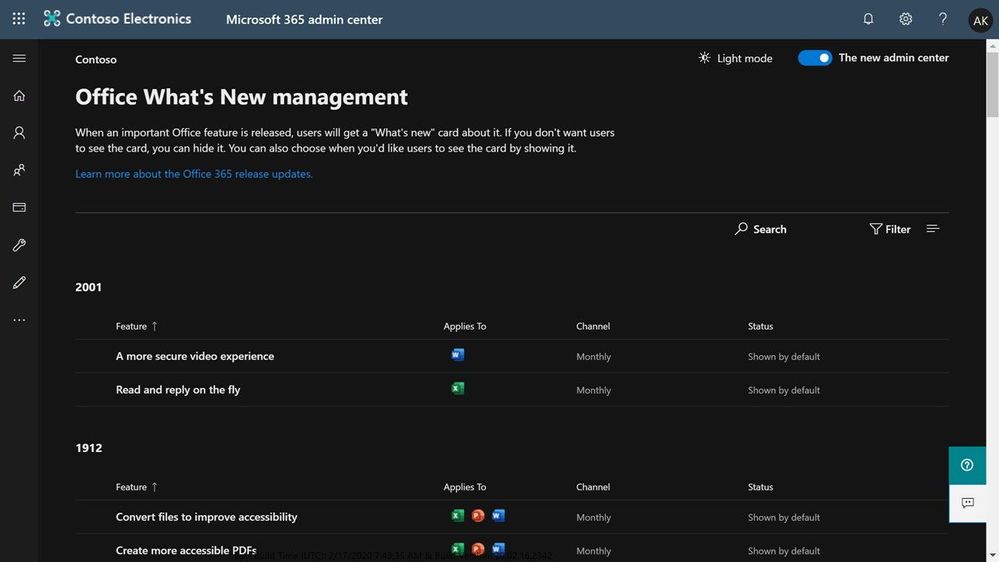 Check out Office What's New management today, and use the in-product feedback and/or the Microsoft Office 365 UserVoice forums to let us know what you think and how we can improve the experience for you.