Get the Microsoft Lists app for iOS

First things first: Get the Microsoft Lists app for iOS from the App Store.

Note: To sign in, the Microsoft Lists app for iOS requires a Microsoft 365 or Office 365 subscription plan where SharePoint is included. You cannot sign in with consumer Microsoft account credentials.

Second things second: Take all your lists, and create new ones, on the go.

Microsoft Lists is a Microsoft 365 app that helps you track information and organize your work. They are simple, smart, and flexible, so you can stay on top of what matters most to your team. And now you can track issues, assets, routines, contacts, inventory and more to keep everyone in sync from anywhere while on the go with a personalized, mobile-first experience.

The Microsoft Lists app for iOS provides access to the lists you own and that have been shared with you. You can create new lists, edit list items, and easily share with other people. While sipping coffee - create an Issue tracker list. In the passenger’s seat zipping from place to place - share a link to the session item from a conference in the Event itinerary list. Or standing in a grocery line waiting to check out – update the status of an item based on information from a team chat. Work and information management don’t have to stop when you’re on the go.

Watch Bharath Manoj Manda, senior program manager on the Microsoft Lists engineering team, as he provides a 5-minute demo of what you can do with the Lists app on iOS:

You can start a list in several ways - from scratch with ready-made templates, from an Excel file, or from an existing list. Beyond creation, you’ll see all your favorited and recent lists – ones you own or that have been shared with you. You’ll be able to create both personal lists you own and can share, and team lists owned by members of your teams. And as a bonus, the Lists app for iOS supports offline data consumption and dark mode – lights out, lists on! 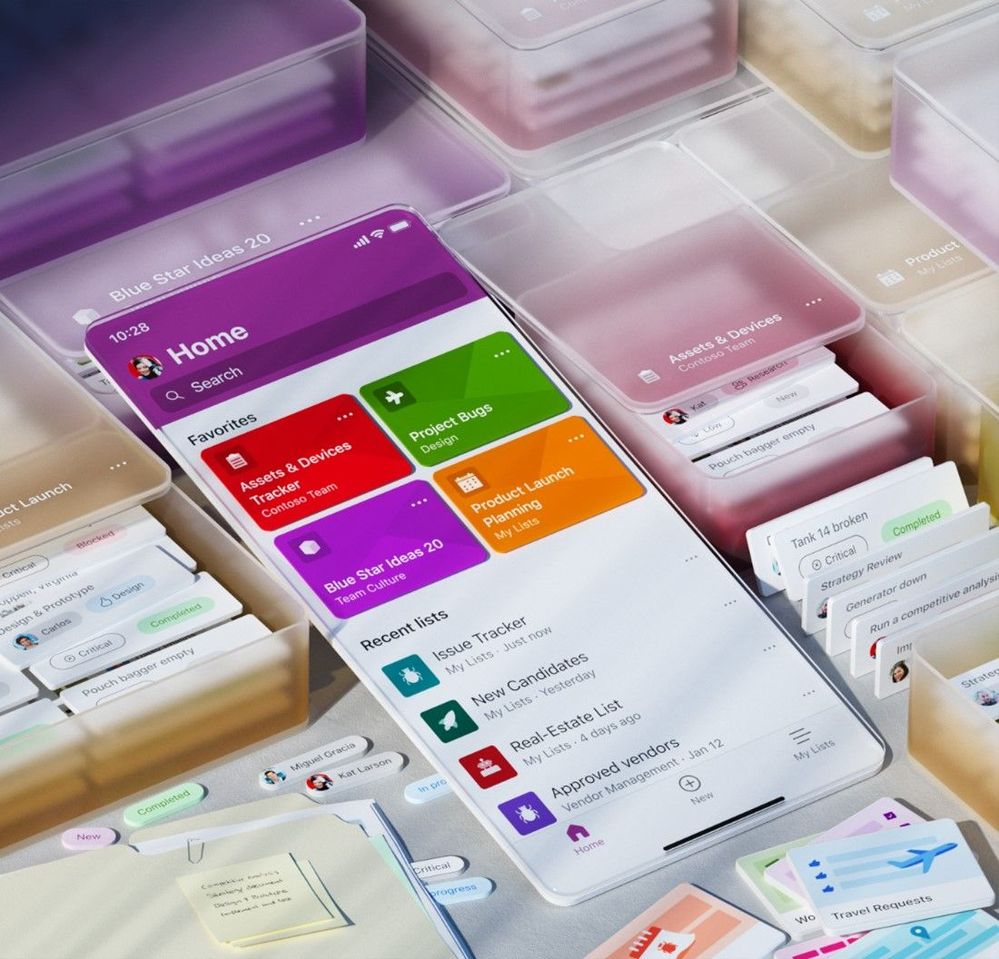 Summary of all list actions while on the go:

Notes: To sign in, your organization needs to have an Office 365 commercial subscription that includes SharePoint. iPad specific improvements coming soon. And, we are working on a Microsoft Lists app for Android and will have more to share later this year.

To learn more about Lists throughout the year, please visit our updated Microsoft Lists resource center for adoption materials, blogs, demos, videos, podcasts, and more – including these new training videos.

Third things third: Track what matters most. Make a list, on the go, and let it flow.

Is this related to Microsoft To Do?

Sad to see that just like the SharePoint App it doesn‘t honor customised forms built with Power Apps. So it‘s not only useless but worse allows to mess with columns that are read only in my forms, e.g. status columns.

@ganeshsanap oh bummer- as someone who's not an experienced user in this space, I'd rather see this functionality tied into Microsoft ToDo or them get tied into this. It always seems weird to me how MS has two things for everything. Like OneDrive and OneDrive for Business, but they're totally different. Or Windows 10 and Windows 10X, which are totally different.

@Mark Kashman  Looks great! The article mentions support for Intune MAM Policies, but in our tenant the Lists app doesn't show up in the public apps section yet. Is support for it rolled out gradually?

Hi @Joey Frijters - I've reached out to our engineering team and documentation team to find out "more than Mark knows" and will reply back soon once I know more. - Mark

Hi @CameronLaRue - here's my pov: Microsoft Lists is an information tracking app that enables teams and organizations to manage a process or workflow. While To Do and Planner are purpose-built apps, specifically designed to help individuals and teams manage their work using tasks. Commonly, when a task is completed, it becomes hidden from view. Microsoft Lists, on the other hand, enables users to collect, view, filter, sort, collaborate, and share structured information across status, life cycle, ownership, and more. Lists integrate with the Power Platform to design, build, and extend productivity apps alongside Power Apps (custom forms) and Power Automate (custom flows).

Appreciate your feedback, @Tghh42. Per Power Apps + Lists - have you considered creating mobile apps "beyond the form" to deliver an "app of their own" experience? I do understand your feedback for custom forms in native list, but curious if this solution might fit your needs - Power Apps is the mobile app entry point with Lists being its primary data source. Suggest reviewing the following docs.ms.com article, "Create a canvas app in Power Apps from a SharePoint list" - even if created in Microsfot Lists, same platform solution approach applies.

Thanks @Mark Kashman  for your suggestion. I have indeed considered that and will do so for a few Apps that will be used primarily on mobile. But it doesn't solve the problem that any user who installs the Lists app can kill my workflows by changing any column they want because everything I'm hiding in PowerApps forms is revealed in the Lists app (and in the SharePoint App as well btw). I just don't see where the problem is in displaying the custom forms. You're doing it in the PowerApps App on mobile and it does work in the mobile browser, so why not do the exact same thing in the Lists and SharePoint Apps?

Furthermore, creating a complete PowerApp is a nice thing,but why do the extra work when the Lists interface is already there and looks just fine?

I installed the app on ios, but it give me error:

@Mark Kashman Do you know what the timeline is to add the Microsoft Lists iOS app (released to the Apple Apps store last week) as an approved client app. We were excited to see the app released but disappointed because our 40K+ employees cannot use the app until we can control it with Conditional Access policies. Thanks!

I'm with Joey, m36five, and others, great that you rolled this out but when it doesn't work with the rest of your stack you sell enterprises it really defeats the purpose.

Love the application and lists using all the time at work. When will we see a version for Microsoft 365 consumer? I would love to use it in my day to day life too.

@Mark Kashman Love the application and lists using all the time at work. When will we see a version for Microsoft 365 consumer? I would love to use it in my day to day life too.

Will the mobile app be enabled for MAM W/O enrollment so we can enforce policies on it?