Turn on suggestions
Auto-suggest helps you quickly narrow down your search results by suggesting possible matches as you type.
Showing results for
Show  only  | Search instead for
Did you mean:
Get the Microsoft Lists app for iOS
By

Get the Microsoft Lists app for iOS

First things first: Get the Microsoft Lists app for iOS from the App Store.

Note: To sign in, the Microsoft Lists app for iOS requires a Microsoft 365 or Office 365 subscription plan where SharePoint is included. You cannot sign in with consumer Microsoft account credentials.

Second things second: Take all your lists, and create new ones, on the go.

Microsoft Lists is a Microsoft 365 app that helps you track information and organize your work. They are simple, smart, and flexible, so you can stay on top of what matters most to your team. And now you can track issues, assets, routines, contacts, inventory and more to keep everyone in sync from anywhere while on the go with a personalized, mobile-first experience.

The Microsoft Lists app for iOS provides access to the lists you own and that have been shared with you. You can create new lists, edit list items, and easily share with other people. While sipping coffee - create an Issue tracker list. In the passenger’s seat zipping from place to place - share a link to the session item from a conference in the Event itinerary list. Or standing in a grocery line waiting to check out – update the status of an item based on information from a team chat. Work and information management don’t have to stop when you’re on the go.

Watch Bharath Manoj Manda, senior program manager on the Microsoft Lists engineering team, as he provides a 5-minute demo of what you can do with the Lists app on iOS:

You can start a list in several ways - from scratch with ready-made templates, from an Excel file, or from an existing list. Beyond creation, you’ll see all your favorited and recent lists – ones you own or that have been shared with you. You’ll be able to create both personal lists you own and can share, and team lists owned by members of your teams. And as a bonus, the Lists app for iOS supports offline data consumption and dark mode – lights out, lists on! 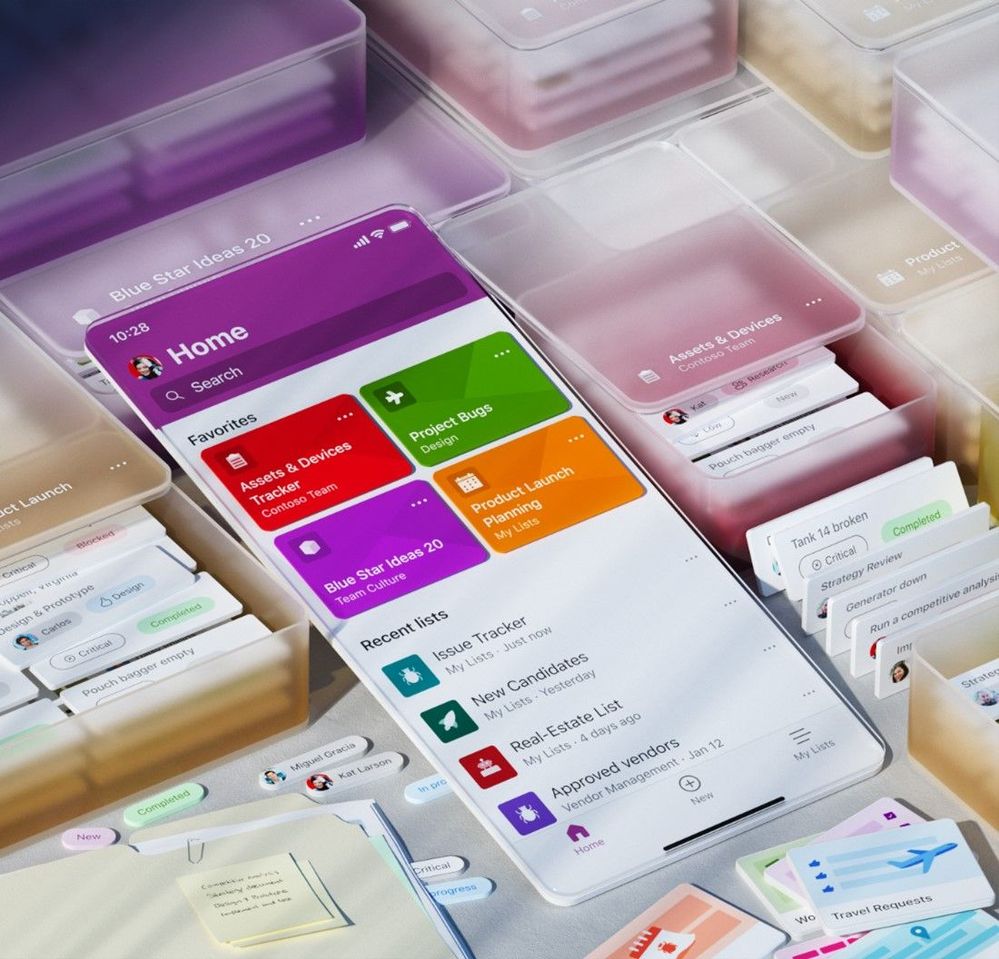 Summary of all list actions while on the go:

Notes: To sign in, your organization needs to have an Office 365 commercial subscription that includes SharePoint. iPad specific improvements coming soon. And, we are working on a Microsoft Lists app for Android and will have more to share later this year.

To learn more about Lists throughout the year, please visit our updated Microsoft Lists resource center for adoption materials, blogs, demos, videos, podcasts, and more – including these new training videos.

Third things third: Track what matters most. Make a list, on the go, and let it flow.