We recently had a case escalated through all levels of support which took quite some time to troubleshoot. After working with engineering to replicate and then pinpoint the issue, we decided it would be useful to post a known issue just in case you've run into this. We'll update this post when it's resolved.

The scenario: When following the steps in this document (Enroll iOS devices with Apple Configurator) for Setup Assistant enrollment, you get “Invalid Profile: The configuration for your iPad/iPhone could not be downloaded from [Your Organization Name]” error after accepting “Apply configuration” on the device.

What is happening behind the scenes: The enrollment URL for the MDM server created with Apple Configurator did not get resolved successfully or was manually edited. A valid URL should start with https://manage.microsoft.com/EnrollmentServer/Discovery.svc/iOS/ESProxy? while an invalid URL usually starts with https://appleconfigurator2.manage.microsoft.com/MDMServiceConfig? which is usually the original profile URL you copied from the Intune console for Setup Assistant Enrollment. The issue does not affect Direct Enrollment scenario.

Workaround: Fortunately, there's a relatively simple workaround. Just replace the invalid URL portion with the valid URL portion for the MDM server on the Mac computer, then try preparing the device again.

Again, we'll update this post when the issue is fixed.

Any updates on this?

10 months later, any update on this?

@Mahmoud Taleb  @jjwb96 I noticed that the Apple Configurator will fix this in the back now. When you enter your URL, starting with  https://appleconfigurator2. it will be replaced with the correct URL prefix. You can check that in Apple Configurator under Preferences-> Servers

@Intune Support Team , i'm still getting this error even after replacing the URL? any ideas?

@Phillip Shilling I had a similar issue, the URL didn't matter. I had to connect the device to Wi-Fi then proceed.

@Mahmoud Taleb , I believe it already had an internet connection via Wi-Fi.

Hi @Phillip Shilling, if you're still experiencing this issue, here are a couple of additional items to check:

@Phillip Shilling Did you upload a CSV containing the serial and description of the device and assign a profile in Intune? https://docs.microsoft.com/en-us/mem/intune/enrollment/apple-configurator-enroll-ios#setup-assistant...

It is possible for me to access the URL.

The test devices have also been assigned to the Endpoint Manager, but I do not see a connection here.

On both devices I get the message "Invalid Profile"

Do you still have ideas for me.

Just to be sure, did you double check the serials in the csv you uploaded? Are they the same as displayed on the devices?

Here is a link on how to check the serialnumber of your iOS device: https://support.apple.com/en-us/HT204073

That should work. Have you already checked your device enrollment restrictions? Are iOS/iPadOS devices allowed to enroll?

Yes i check this, it is allow: 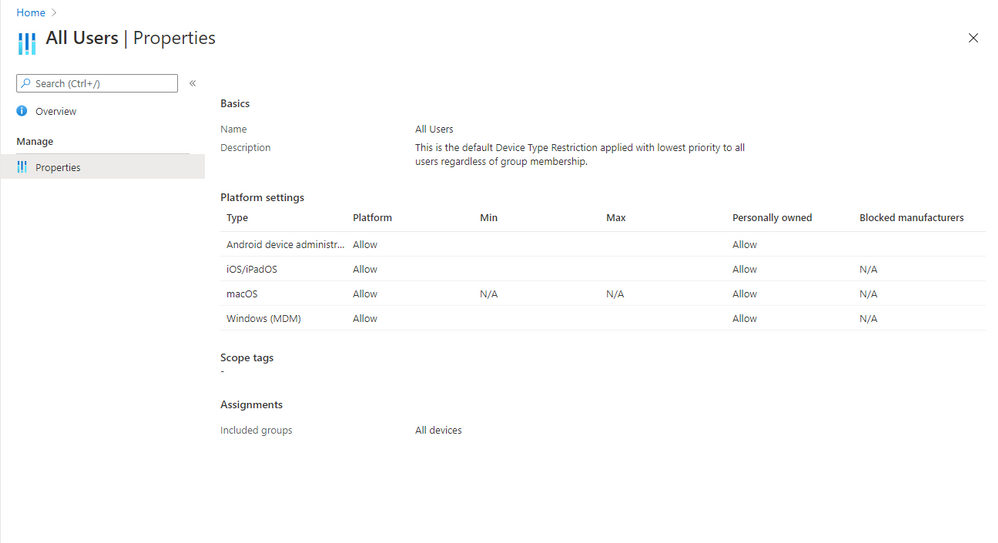 I just tested the enrollment with my own intune tenant and it's working. As far as I can see the error you are seeing is not related to Apple configurator 2, because you have changed device management from Apple Configurator to ADE. You can also see the device appear in Intune so the Sync is working and the Token is still valid. The device is allowed to enroll, because enrollment is not blocked. So that should not be an issue. I think the issue is related to profile in ADE. You could try to create a new profile and try to assign it to the device. Otherwise I would suggest you to open a service request.

I just got off a call with Microsoft and thought I would share a fix that worked for me. After having two iPads enroll fine I started having the same issues as described here. So the steps I have outlined fixed this issue:

I would have never thought that this would work but it did. I hope this helps someone else as I have been dealing with this for two weeks on my own while waiting for a call back from MS.